You are cordially invited to a webinar presentation on the topic:
Putin’s Playbook: Russia’s Secret Plan to Defeat America
with
Ms. Rebekah Koffler 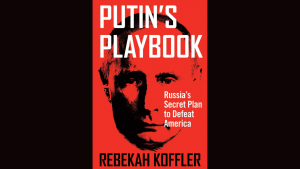 About the lecture: Just because the “Russian collusion” between Russian President Vladimir Putin and former US President Donald Trump turned out to be a hoax, it doesn’t mean that Russia did not intervene in 2016 election, and in two subsequent elections. Not only Moscow’s covert influence operations poisoned American politics, the Kremlin also sowed confusion about the real Russian threat to the United States. In today’s presentation, Ms. Koffler will speak about Putin’s long-range plan— his “playbook”—to destabilize, weaken and subdue the United States, preparing for the war that he believes is inevitable. She will also reveal how unprepared the U.S. lumbering bureaucracy is to defend America from Putin’s threat.

About the speaker: Rebekah Koffler, the author of Putin’s Playbook: Russia’s Secret Plan to Defeat America, is a former intelligence officer who served as a Russian Doctrine & Strategy specialist in the Defense Intelligence Agency from 2008 until late 2016. She has delivered classified briefings to top U.S. military commanders, NATO ministers, the directors of the CIA and DIA, the White House National Security Council, and senior congressional staff. In her post-public service career, Rebekah is a writer, commentator, and national security consultant whose work has been published on the Fox News website, The Hill, the New York Post, the Daily Caller, and the Washington Times. She has appeared on Fox News, Newsmax, One America News, and the Sean Hannity nationally syndicated radio show.