You are cordially invited to an Asia Initiative Lecture Series (AILS) webinar presentation on the topic:
Security Situation on The Korean Peninsula
with
Colonel David S. Maxwell 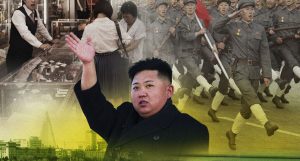 About the lecture: Colonel David S. Maxwell will discuss the nature, objectives, and strategy of the Kim family regime, why the regime poses a threat to the Republic of Korea, and why it is in the US national interest to ensure there is a strong ROK/US alliance to deter war. He will outline the “Big Five” — war, regime collapse, human rights, asymmetric threats, and unification. He will underline that the only way the world will see an end to the North’s nuclear program, threats, human rights abuses, and crimes against humanity is through unification and the establishment of a United Republic of Korea.

About the speaker: David S. Maxwell is a Senior Fellow at the Foundation for Defense of Democracies (FDD).* He is a 30-year veteran of the US Army, retiring as a Special Forces Colonel with his final assignment teaching national security at the National War College. He served over 20 years in Asia, primarily in Korea, Japan, and the Philippines. Colonel Maxwell served on the ROK/US Combined Forces Command staff and the Special Operations Command Korea. He is the co-author of the first CONPLAN 5029, the plan for North Korean Instability and Regime Collapse. He commanded the Joint Special Operations Task Force Philippines and was the G3 at the US Army Special Operations Command. Following retirement, he served as the Associate Director of the Security Studies Program at Georgetown University’s School of Foreign Service. He is on the Board of Directors of the Committee for Human Rights in North Korea, the International Council of Korean Studies, the Council on Korean-US Security Studies, the Special Operations Research Association, the OSS Society, and the Small Wars Journal. He earned a B.A. in political science from Miami University, and an M.A. in Military Arts and Science from the U.S. Army Command and General Staff College and from the School of Advanced Military Studies, and an M.S. in National Security Studies from the National War College. Colonel Maxwell has taught Unconventional Warfare and Special Operations for Policy Makers and Strategists at graduate schools in the DC area.