You are cordially invited to an Asia Initiative Lecture Series (AILS) webinar presentation on the topic:
The Return of Great Power Rivalry
with
Dr. Matthew Kroenig 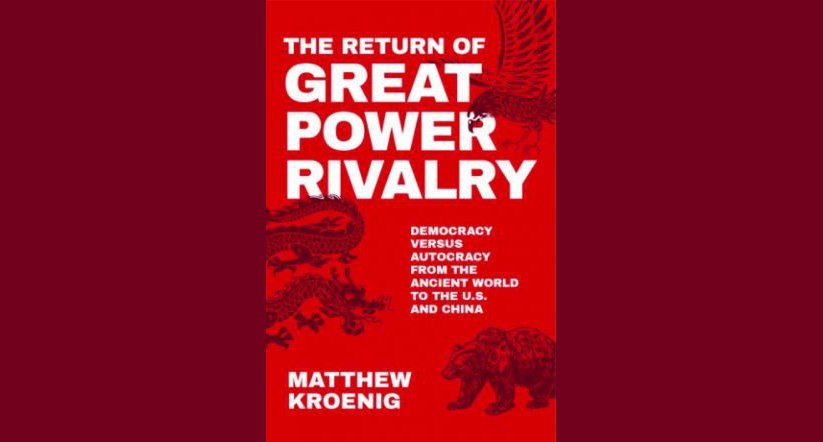 About the lecture: The United States of America has been the most powerful country in the world for over seventy years, but recently the U.S. National Security Strategy declared that the return of great power competition with Russia and China is the greatest threat to U.S. national security. Further, many analysts predict that America’s autocratic rivals will have at least some success in disrupting-and, in the longer term, possibly even displacing-U.S. global leadership.

Brilliant and engagingly written, The Return of Great Power Rivalry argues that this conventional wisdom is wrong. Drawing on an extraordinary range of historical evidence and the works of figures like Herodotus, Machiavelli, and Montesquieu and combining it with cutting-edge social science research, Matthew Kroenig advances the riveting argument that democracies tend to excel in great power rivalries. He contends that democracies actually have unique economic, diplomatic, and military advantages in long-run geopolitical competitions. He considers autocratic advantages as well, but shows that these are more than outweighed by their vulnerabilities. Kroenig then shows these arguments through the seven most important cases of democratic-versus-autocratic rivalries throughout history, from the ancient world to the Cold War. Finally, he analyzes the new era of great power rivalry among the United States, Russia, and China through the lens of the democratic advantage argument. By advancing a “hard-power” argument for democracy, Kroenig demonstrates that despite its many problems, the U.S. is better positioned to maintain a global leadership role than either Russia or China.

A vitally important book for anyone concerned about the future of global geopolitics, The Return of Great Power Rivalry provides both an innovative way of thinking about power in international politics and an optimistic assessment of the future of American global leadership.

About the speaker: Dr. Matthew Kroenig is the deputy director of the Scowcroft Center for Strategy and Security at the Atlantic Council and the director of the Center’s Global Strategy Initiative. He is also a tenured professor of government and foreign service at Georgetown University. A 2019 study in Perspectives on Politics ranked him one of the top 25 most cited political scientists of his generation. He is the author or editor of seven books, including The Return of Great Power Rivalry: Democracy versus Autocracy from the Ancient World to the US and China (Oxford University Press, 2020) and The Logic of American Nuclear Strategy (Oxford University Press, 2018). His articles and commentary have appeared in Foreign Affairs, Foreign Policy, Politico, the New York Times, the Wall Street Journal, the Washington Post, and many other outlets. He co-authors the bi-monthly “Its Debatable” column at Foreign Policy. Dr. Kroenig provides regular commentary for major media outlets, including PBS, NPR, BBC, CNN, and C-SPAN.

He previously served in several positions in the US government, including in the Strategy office in the Office of the Secretary of Defense and the Strategic Assessments Group at the Central Intelligence Agency. He regularly consults with a range of US government entities. He has previously worked as a Stanton Nuclear Security Fellow at the Council on Foreign Relations and a research fellow at Harvard University and Stanford University. His work has been supported by the National Science Foundation, the Carnegie Corporation of New York, the Smith Richardson Foundation, the Hertog Foundation, and the Stanton Foundation. He is a life member of the Council on Foreign Relations and holds an MA and Ph.D. in political science from the University of California at Berkeley. He lives with his wife and children in Georgetown.