You are cordially invited to a webinar presentation on the topic:
Transforming US Intelligence for Irregular War: Task Force 714 in Iraq
with
Dr. Richard Shultz 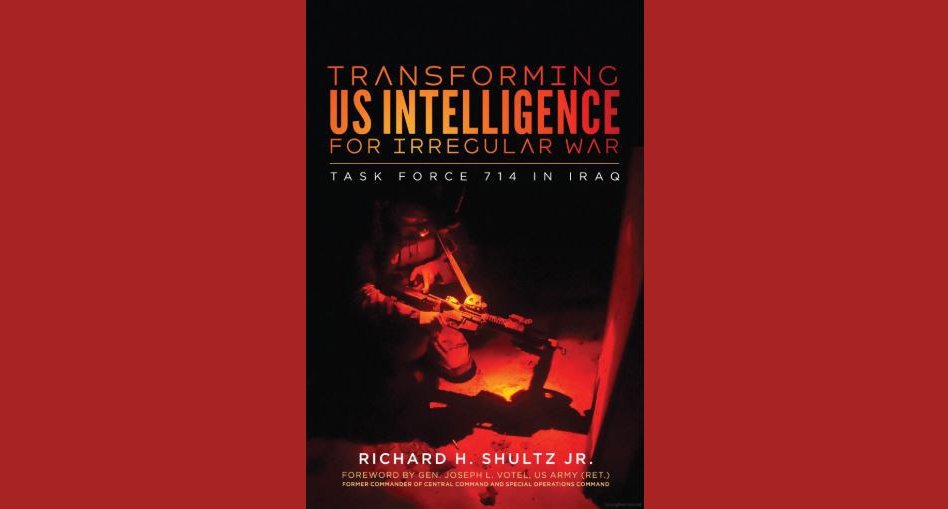 This event is sponsored by The Institute of World Politics’ IAFIE Student Chapter.

About the book: When Joint Special Operations Command deployed Task Force 714 to Iraq in 2003, it faced an adversary unlike any it had previously encountered: al-Qaeda in Iraq (AQI). AQI’s organization into multiple, independent networks and its application of Information Age technologies allowed it to wage war across a vast landscape. To meet this unique threat, TF 714 developed the intelligence capacity to operate inside those networks, and in the words of commander Gen. Stanley McChrystal, USA (Ret.) “claw the guts out of AQI.”

In Transforming US Intelligence for Irregular War, Richard H. Shultz Jr. provides a broad discussion of the role of intelligence in combatting nonstate militants and revisits this moment of innovation during the Iraq War, showing how the defense and intelligence communities can adapt to new and evolving foes. Shultz tells the story of how TF 714 partnered with US intelligence agencies to dismantle AQI’s secret networks by eliminating many of its key leaders. He also reveals how TF 714 altered its methods and practices of intelligence collection, intelligence analysis, and covert paramilitary operations to suppress AQI’s growing insurgency and, ultimately, destroy its networked infrastructure.TF 714 remains an exemplar of successful organizational learning and adaptation in the midst of modern warfare. By examining its innovations, Shultz makes a compelling case for intelligence leading the way in future campaigns against nonstate armed groups.

About the speaker: Richard H. Shultz, Jr. is the Lee E. Dirks Professor of International Politics at the Fletcher School, Tufts University. He teaches graduate-level courses on various aspects of international security affairs to include: the role of force in international politics; internal conflict and irregular war; special operations strategies for responding to irregular warfare challenges; origins, conduct, and termination of war; intelligence and national security; and crisis management.

At the Fletcher School he also is Director of the International Security Studies Program. The ISSP prepares U.S. and international graduate students for public and private sector careers in national and international security policy. Director responsibilities include management of courses and curriculum; conferences and workshops; senior-level speaker series; the military fellows program; crisis simulation exercises; fundraising.

Previously, in Washington, he served as director of research for the National Strategy Information Center from 2004-2012. In 2010 he completed with Roy Godson a major study focused on Adapting America’s Security Paradigm and Security Agenda to meet the challenges posed by 21st Century armed groups and the states that support them. He also completed a study on Armed Groups and Irregular Warfare: Adapting Professional Military Education, a curricular guide for military educational institutions, among other publications and reports.

He has served as a security consultant to various U.S. government departments and agencies concerned with national security affairs. For the last ten years that has included as a senior fellow to the Special Operations Command’s Joint Special Operations University. As a senior fellow, he deploys abroad as a member of military education teams to teach courses on terrorism/counterterrorism, special operations integration, and asymmetric challenges to NATO to foreign military officers. This has included programs taught in Saudi Arabia, Jordan, the UAE, Tunisia, Morocco, Mali, Kenya, Cameroon, each of the Baltic nations, and the NATO School in Germany. As a senior fellow, he also conducts unclassified research and prepares studies for publication in SOCOM/JSOU’s monograph series. Other consultancies have included with other components of SOCOM and the Marine Corps.