You are cordially invited to a webinar presentation on the topic:
U.S. Diplomacy as a Force for Good
with
Amb. David Hale 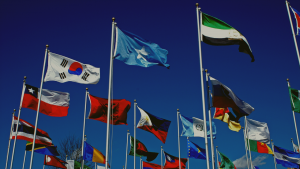 About the lecture: Using recent and current examples, Amb. David Hale will describe how U.S. foreign policy decision-makers and implementers advance American interests not only to the benefit of the U.S., but to other societies as well. He will also describe tradeoffs and limitations inherent to the conduct of great power diplomacy.

About the speaker: Ambassador David Hale is a Distinguished Diplomatic Fellow at the Wilson Center, on sabbatical from the State Department. He was the Under Secretary of State for Political Affairs from August 2018-May 2021, reporting directly to the Secretary of State. Ambassador Hale was responsible for the conduct of U.S. foreign relations globally. He supervised the Department’s six regional bureaus and the bureau for international organizations, as well as all American embassies, consulates and missions abroad. He interacted regularly with world leaders to advance America’s foreign policy agenda, traveled to over 50 countries in that role, and spoke to a wide variety of audiences.

Ambassador Hale has served in the U.S. Foreign Service for 37 years and was appointed to its senior-most rank, Career Ambassador, in 2018. A Career Ambassador is a lifetime rank, Senate-confirmed, and equivalent to a four-star general. He was nominated by the President and confirmed by the Senate to senior positions in the administrations of Presidents Bush, Obama, and Trump. He served as: Ambassador to Pakistan (2015-2018), Ambassador to Lebanon (2013-2015), Special Envoy for Middle East Peace (2011-2013), Deputy Envoy (2009-2011), Deputy Assistant Secretary of State covering Egypt, Israel, Jordan, Syria, the Palestinians, and Lebanon (2008-2009), and Ambassador to Jordan (2005-2008).

Before serving as ambassador to Jordan and Lebanon, he had two previous tours in each of those countries. His other overseas assignments were in Israel, Tunisia, Bahrain, and Saudi Arabia. At home, Ambassador Hale was Office Director for Israel and Palestinian Affairs (2001-2003), Executive Assistant to Secretary of State Madeleine Albright (1997-1998), a political officer at our permanent mission to the UN in New York (1995-1996), Special Assistant to Under Secretary of State Tarnoff (1994-1995), and Staff Assistant to Assistant Secretary of State for Near Eastern and South Asian Affairs Murphy (1988-1989).

He graduated from Georgetown University’s School of Foreign Service in 1983 and speaks Arabic.