You are cordially invited to a special discussion entitled

Professor John J. Tierney of the Institute of World Politics will serve as moderator.

This event is co-sponsored by the FPI Center for Military and Diplomatic History. 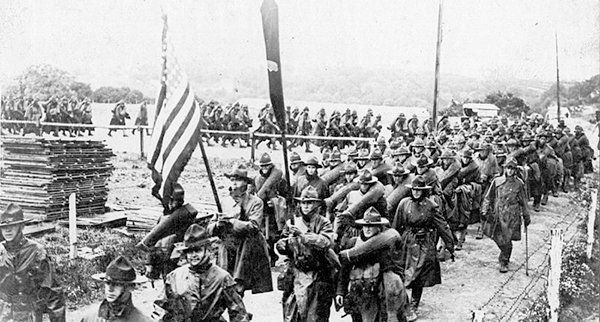 April 6, 2017, marks the hundred year anniversary of the US declaration of war on Germany. Following more than two and a half years of neutrality, the United States mobilized for war on a scale the nation had never before seen. More than two million Americans were to serve in the US armed forces during World War I. Once American combat power arrived in Europe, it tipped the military balance against Germany, frustrating Germany’s Spring Offensive of 1918 and resulting ultimately in the German surrender of November of that year.

In commemoration of the centennial of America’s entry into World War I, the Institute of World Politics and the Center for Military and Diplomatic History are hosting three of the world’s leading historians of the war: Michael S. Neiberg, Edward Lengel, and John H. Maurer.

MICHAEL S. NEIBERG is the inaugural Chair of War Studies in the Department of National Security and Strategy at the United States Army War College. His published work specializes on the First and Second World Wars, notably the American and French experiences. His most recent book on the First World War is Dance of the Furies: Europe and the Outbreak of World War I(Harvard University Press, 2011). The Wall Street Journal recently named it one of the five best books ever written about the war. In October, 2012 Basic Books published his The Blood of Free Men, a history of the liberation of Paris in 1944. In May, 2015 Basic published his Potsdam: The End of World War II and the Remaking of Europe. In October, Oxford University Press published his Path to War, a history of American responses to the Great War, 1914-1917.

EDWARD LENGEL is Chief Historian of the White House Historical Association, located in historic Decatur House on Lafayette Square in Washington, D.C. Before beginning work there in the fall of 2016, he directed the Washington Papers project for many years. A military historian, he is the author of several books, including General George Washington: A Military Life; To Conquer Hell: The Meuse-Argonne, 1918; First Entrepreneur: How George Washington Built His–and the Nation’s-Prosperity; and the Army Historical Foundation award-winning Thunder and Flames: Americans in the Crucible of Combat, 1917-1918. He is also a regular contributor to magazines including Military History and Military History Quarterly, and appears often on television and radio including NPR and the History Channel.

JOHN H. MAURER is the Alfred Thayer Mahan Professor of Sea Power and Grand Strategy at the Naval War College in Newport, Rhode Island. He is a graduate of Yale University and holds an M.A.L.D. and Ph.D. in International Relations from the Fletcher School of Law and Diplomacy, Tufts University. He is the author or editor of books examining the outbreak of the First World War, military interventions in the developing world, naval rivalries and arms control between the two world wars, and a study about Winston Churchill’s views on British foreign policy and grand strategy. He also serves as a senior research fellow at the Foreign Policy Research Institute, on the Editorial Board of Orbis: A Journal of World Affairs, and Associate Editor of Diplomacy and Statecraft. In recognition for his service and contribution to professional military education, he has received both the U.S. Navy’s Meritorious Civilian Service Award and Superior Civilian Service Award.

JOHN J. TIERNEY, JR. is the Walter Kohler Professor of International Relations at the Institute of World Politics. He was the Special Assistant and Foreign Affairs Officer, U.S. Arms Control and Disarmament Agency from 1981-1993. He has served as Executive Director of the Congressional Caucus on National Defense and the National Security Research Group, U.S. House of Representatives; Chairman, Politics Department, Catholic University; and Professor of International Relations, University of Virginia and The Johns Hopkins University.