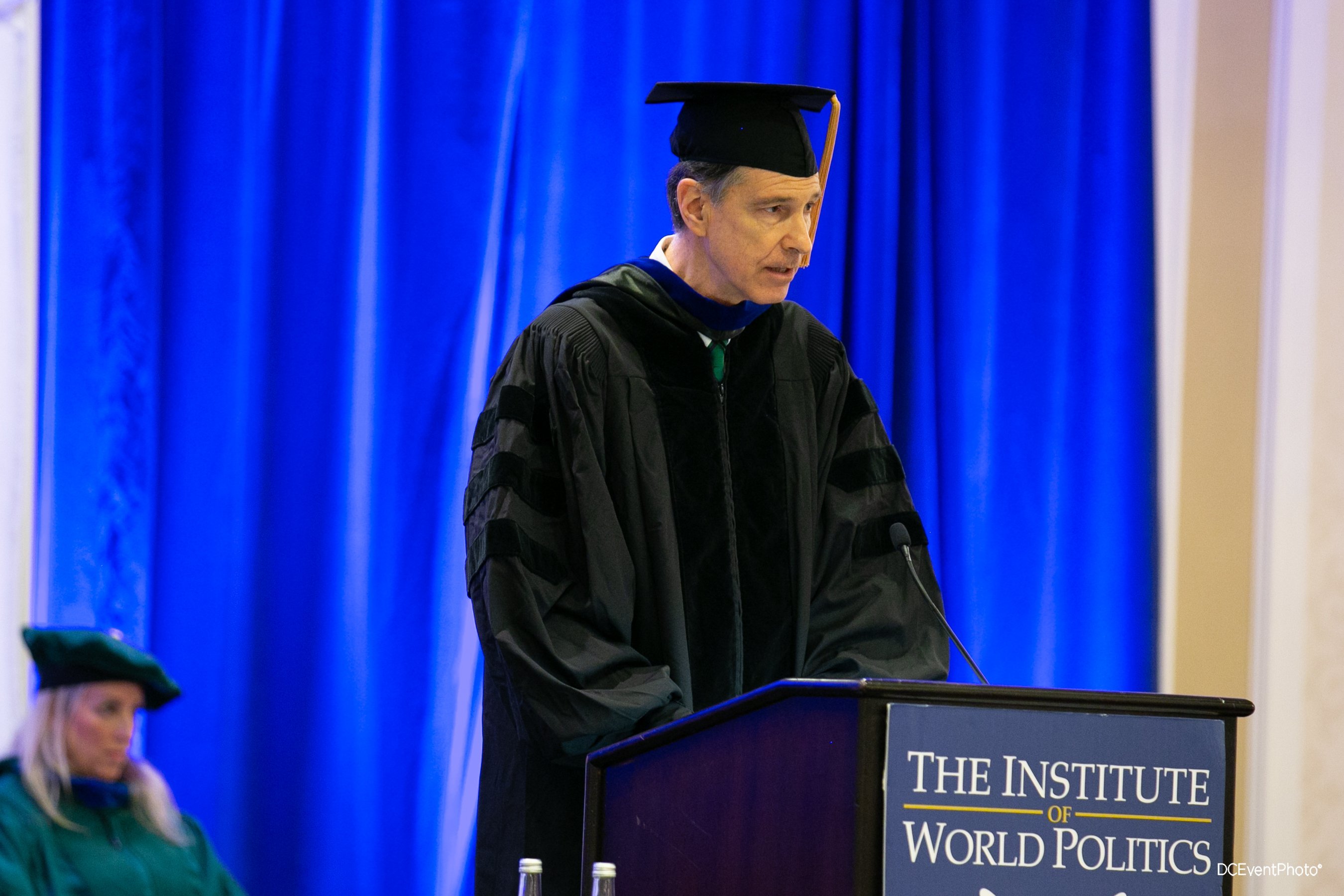 Above: Founder and President of The Institute of World Politics, Dr. John Lenczowski, delivers remarks at IWP’s Commencement ceremony on May 18, 2019 at the Fairmont Hotel in Washington, D.C.

Good morning ladies and gentlemen.  I would like to begin by thanking the entire IWP community for everything you all do to pursue our mission and to make it possible in the first place.

We have faithful and generous Trustees and benefactors who honor us with their presence today.  We have our magnificent faculty, with their extraordinary dedication to passing on their wisdom to the next generations.

We have our tireless and dedicated staff, who perform every function of an academic institution so often with grace under pressure.  And we have our students who have chosen to study at a school that has not just a professional curriculum, but an ethos that we hope will be ever more contagious.  Thank you to everyone!

What is IWP’s mission?  Why are we here?  In short, IWP is dedicated to developing leaders who have a sound understanding of 1) the realities of the world; 2) the ethical conduct of the various arts of statecraft – the instruments of national power; 3) the founding principles of the American political economy; and the Western, Greco-Roman-Judeo-Christian moral tradition.

This mission really has two dimensions: a professional one and a philosophical one.

The professional one is quite clear: We must know what we face in the world: other cultures, foreign ways of thinking, behavior that we think is unreasonable but which others consider to be perfectly reasonable, and various methods of statecraft that are alien to our own culture.

Do we develop strategies to cheat on treaties even before we sign them?  Other powers do.

Do we think it is reasonable to fight and win a nuclear war?  Others powers do.

Do we believe it is acceptable deliberately to kill innocent civilians to serve larger strategic ends?  Other powers do.

Once we understand such realities, we must then know how to deal with it all.  This entails knowledge of all the arts of statecraft, each of which is like an instrument in an orchestra, and which together must be strategically harmonized.

If the instrumentalists are aware that they are part of an orchestra, and if they have developed the capacity for integrated strategic thinking, then there is a greater chance that the music will be harmonious and not discordant.

But, of course, we need conductors who are capable of integrated strategic thinking.  Otherwise, whole-of-government approaches to defending peace and security will never work, and utilizing non-violent methods of statecraft won’t be seriously tried before our leaders decide to resort to armed force.

Usually, professional schools of international affairs don’t have much of a philosophical dimension.  But IWP does.

We attempt, as well as we can, in the course of a two-year program, to place our professional curriculum in the context of a larger liberal arts education so that one’s professional work can be understood to be an instrument in much larger orchestras – that of the community, and that of life itself.  Provoking an understanding of these larger contexts – or, put another way, promoting an integrated strategic view of life – is the fundamental task of the university.  But today, our universities have been failing at this task at a greater and more distressing rate than ever before.

The reading of classic literature that exposes students to the great lessons of life has suffered from similar neglect.  Students can graduate without ever having read the Federalist Papers, Shakespeare, Aristotle, Aquinas, or Thucydides.  In the great modern celebration of multiculturalism, fewer and fewer students study foreign languages.

Indeed, most colleges and universities have junked the classical liberal arts core curriculum in favor what I call the 2,000-course smorgasbord, where the students just want to eat dessert and not their vegetables.  The result is that too many of them are failing to become educated persons.

The proper end of education is the pursuit and discovery of truth.  In the larger context, this entails understanding human nature, the existence of moral standards, and the existence of objective truth itself.

In his great treatise on higher education, John Henry Newman stressed the importance of pursuing “a comprehensive view of truth in all its branches, of the relations of science to science, of their mutual bearings, and their respective values.”  Such an education “educates the intellect to reason well in all matters, to reach out towards truth, and to grasp it.”

But today, too much of the academy rejects the existence of objective truth and objective moral standards.  Something is said to be true for you, but not for me.  What they are saying is: “It is absolutely true that there is no absolute truth.”

Despite the fact that this very proposition refutes itself, no matter….everything is relative; everything is a matter of personal preference.  And how one views a given phenomenon is defined completely subjectively: how you feel about this or that, and not whether it is true or not or good or not.

In rejecting truth, the zeitgeist – the spirit of the times – in today’s academy has been consistently rejecting reason.  In the context of today’s atmosphere, if you don’t conform to the regnant ideology, whatever argument you might make, makes no difference.

If you don’t agree with what is politically correct as defined by today’s academic arbiters, then you must be part of the oppressor class.  And today’s ideology, as a variant of Marxism-Leninism, defines classes according to group identity.

I should only note here that history’s greatest experts on defining individuals not by their character or their achievements but by their group identity were the Nazis and the Soviets.  As experience with modern totalitarianism has amply shown, the rejection of reason ultimately imposes a prohibition on thought itself.

IWP cannot remediate knowledge of everything modern universities have eliminated from their core curricula.  But we can do a little.

Getting our students to contemplate the follies of relativism and subjectivism is one example.

Getting them to study more history than they got before is another.

We require the study of American founding principles, and if students have already studied them, then they must study comparative ideologies and belief systems.

Whereas only 3 percent of universities require students to take any economics, that subject is part of our core curriculum.

It is also our goal to teach our students not what to think, but how to think.

And that is just the larger context.  Upon such a foundation, our students study how to deal with the greatest threats we face.  And here, we have endeavored to achieve what Newman called “the real cultivation of the mind: namely, to have the “intellect … properly trained and formed to have a connected view or grasp of things.”  We call it integrated strategic thinking.

Today the threats America faces are growing, as the full effects of years of disinvestment in diplomacy and defense are making themselves manifest.

We are arguably in the midst of three new cold wars: one with radical jihadism, the second with a revanchist Russia, and the third with the communist regime in Beijing – a regime with a Marxist-Leninist-Maoist ruling Party, a clinically fascist economy, and an imperialist global agenda.  Addressing these challenges is a daunting task.  But our graduates know that the first step in meeting them is to face reality squarely, and to tell the truth about these realities – especially to power.

If our people understand the full truth of these threats and challenges, we will have the best chance that common sense will prevail and we will mobilize the resources to address them.

But this requires moral strength to overcome the temptation to indulge in willful blindness and wishful thinking, which are among the greatest impediments to seeing foreign reality correctly.  But these are not intellectual problems.  They are moral failings.

And so, it is a huge part of our business to ensure that our students recognize that character development – the cultivation of the personal and civic virtues necessary for effective leadership –  is the essential ingredient for strategic success.

Let us recall these virtues.  I like to quote General MacArthur on what they are:

MacArthur was describing the virtues that must characterize those leaders who wear the uniform and risk their lives for their country.  But we believe that these virtues apply to those who serve in all the capacities of ensuring peace and security.  And that means you, our graduates.

The moral choices you make will define your destiny.  If you are to end up living a life worthy of self-respect, you must constantly keep in mind the development of your character.  And if you start forgetting what all those virtues are, just remember one lesson: good character means doing the right thing when nobody is looking.

As many of you have heard me say before, there are two kinds of people: the careerist and the mission-oriented person.  The careerist seeks the promotion, the credit, the glory, and the power.  It is all about one’s self.  Mission oriented people are there to serve others first and to serve a cause higher than oneself.  In doing so, they will achieve most of the things the careerist wants but will never risk sacrificing their honor to get them.

IWP’s graduates have been going on to do great things for our country and the world.

One of them, Lawrence Buckley, of the Class of 2007, has just entered the Senior Executive Service in FBI and is now Senior Director of the staff of the President’s Intelligence Advisory Board in the White House.

A member of the Class of 2012 and Congressional staff member managed to prevent the shutdown of Mandarin and Cantonese broadcasts over the Voice of America, and restored the funding for these services.

Three IWP alumni have been working for the Chairman of the Senate’s Homeland Security Committee and were responsible for organizing the first Congressional hearing ever on the subject of the War of Ideas against Radical Islamism.

A member of the Class of 2006 is now the senior counterintelligence analyst for China in one of our leading counterintelligence services and has done extraordinary work reviving the U.S. government’s capabilities to counter foreign influence operations.

One of our Senior War College Fellows, Army LTG J.T. Thomson, served as Commandant at West Point and is currently commander of all the land forces of NATO.

Just this week, I ran into a member of the Class of 2013 in the Pentagon, where he is working as a strategy adviser for the Under Secretary of Defense for Policy.  He contributed to writing the National Defense Strategy of the United States.

Most of these graduates advanced to these positions and accomplished great things remarkably early in their careers.  We are so proud of them and look forward to being proud of you, not only of your professional service but also of your efforts to raise the level of moral leadership in America and the world.

You graduates will become the next generation of leaders.

Congratulations and God bless you all!