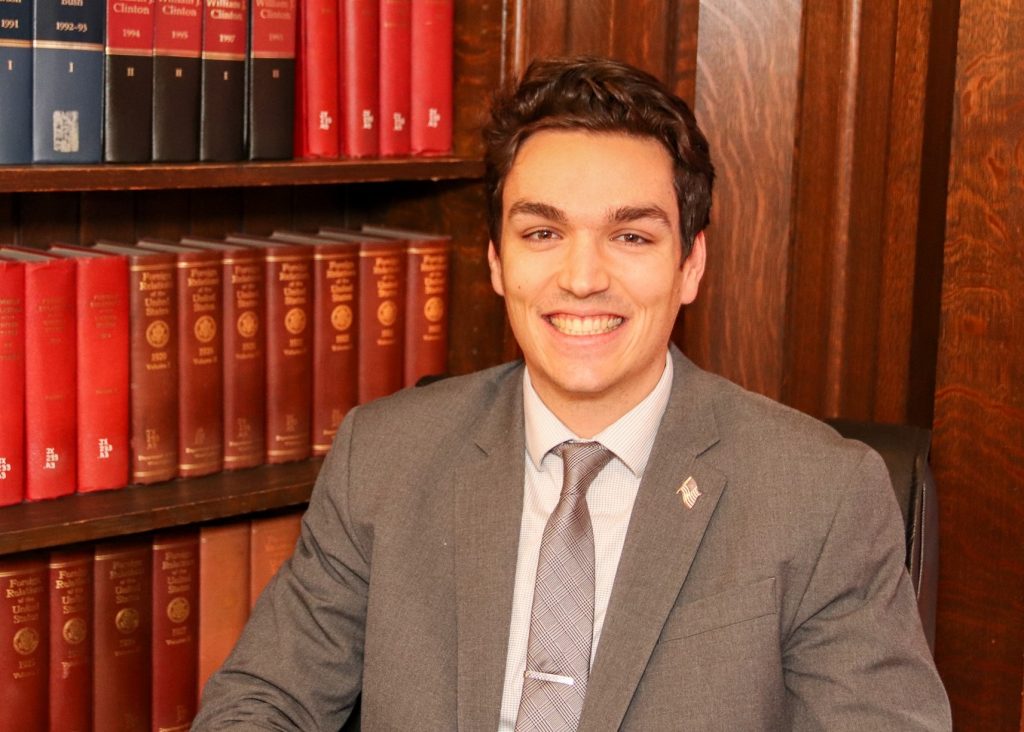 The experience I have had while at The Institute of World Politics this semester as a Research Intern and Assistant has been nothing less than exceptional. From taking a graduate course for the first time to playing the role of an intelligence analyst in IWP’s Baltic Storm 2025 War-Game Simulation, the knowledge and experience I have gained while interning here will remain with me for the rest of my professional career.

The experiences I have had access to have given me the confidence of knowing I will be adequately prepared to transition from being an undergraduate student to begin a career field focused on intelligence, national security, and international affairs. However, the positive experiences I have had while at IWP would not have been possible without IWP’s unparalleled teaching and continuous reflection to the importance of the practice of the ethical use of force in statecraft with consideration of Judeo-Christian values, the Founding Principles of America’s political economy, and the Western moral tradition. These themes and mission in itself are what sets not only IWP’s graduate school apart from the rest, but also its internship program.

I am currently double majoring in Government and International Politics and History at George Mason University and cannot speak any more highly of what my internship experience at IWP has done to aid in my discovery of how my skills, interests, and experiences as an undergraduate will transition well into a career serving the United States government and protecting its national interests.

While an intern at IWP, you will not only have the opportunity to meet and network with professionals and peers who have shared career interests as your own, but you will also gain access to all the resources current graduate students have at IWP, from Career Services to participation in intelligence and national security based simulations. Additionally, you will have the opportunity to audit or take a graduate level course free of charge and have the ability to work one-on-one with a professor at the Institute as a research assistant doing a project centered on intelligence and national security issues.

The best lesson I learned from interning at IWP is the importance of networking and, more importantly, how to do it properly. As an undergraduate and especially as a young professional in the D.C. area, the word “networking” tends to be daunting and is not often specified within undergraduate environments. You will have the opportunity as well as the resources while an intern at IWP to create a professional network of peers, coworkers, and alumni within career fields of your interest or that your skills can be applied to which will be essential as you either discover your career interests and goals, or look to a future career in intelligence, national security, or foreign affairs. Going to networking events provided by IWP where I may have only known 1-2 people allowed me not only to put myself out there, but has allowed me to learn about other aspects of the national security and intelligence community that I had not realized existed. Take advantage of networking!

While it is difficult for me to decide what experience was the best of the many that I found transformative while interning at IWP, including taking a graduate course for the first time, creating my own case study to research China’s grand strategy in the Belt and Road Initiative, or being given invaluable career advice in critiquing my resume and knowing how to navigate the United States’ intelligence bureaucracy within Career Services, the opportunity to participate in the War-Game Simulation, Baltic Storm 2025, stood out the most. This two-week simulation is offered every fall semester at IWP and provided me with the skills and confidence to know that intelligence and foreign policy is what I want to pursue and is an area that interests me as I consider working for the United States government. While playing the role of an Imagery Air and Missile Analyst for NATO East, I had the opportunity to create intelligence assessments and provide a professional briefing from daily intelligence reports that led to a two-day war-game poised against the country of Russia. This experience not only provided me with the opportunity to meet and work with current students and alumni in an academic environment, but has helped solidify my interest in pursuing a career in intelligence and foreign policy.

My biggest piece of advice for incoming interns is to take advantage of everything IWP has to offer; most importantly while as an intern, but also after your time at IWP. This internship is what you make of it and can provide opportunities that you more often than not will need to discover for yourself, ask about, or participate in. While you will often be under the guidance of professionals or peers while interning at IWP, there are endless opportunities that are not always in plain sight, meaning opportunities of your interest or benefit can be created while you’re an intern that you may not have realized were there. Being willing to try new things and advocating for myself has given me a better sense of what a future work environment will be like, regardless of what I pursue and has provided me with skills I will use for the rest of my career.