Please join us at the Institute on Friday, February 29 as IWP's Dr. Marek Chodakiewicz hosts the next film in our Movie Night series, "The Lives of Others" (2006). The evening will begin with food and beverages at 6:30 p.m., followed by the film at 7:30 p.m.

"The Lives of Others" (Das Leben der Anderen) is an Academy Award-winning German film, marking the film debut of writer and director Florian Heckel von Donnersmarck. At once a political thriller and human drama, "The Lives of Others" begins in East Berlin in 1984, five years before Glasnost and the fall of the Berlin Wall, and ultimately takes us to 1991, in what is now the reunited Germany. The movie traces the gradual disillusionment of Captain Gerd Wiesler (Ulrich Muhe), a highly-skilled officer who works for the Stasi, East Germany's all-powerful secret police. His mission is to spy on a celebrated writer and actress couple, Georg Dreyman (Sebastian Koch) and Christa-Maria Sieland (Martina Gedeck).

At the conclusion of the film, Dr. Chodakiewicz will lead a discussion of the film and the Stasi in general. Please RSVP using the link above if you plan to attend. We hope you will join us! 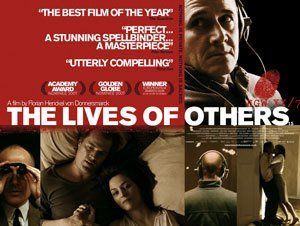