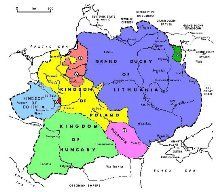 On Wednesday, 30 November 2011, Prof. Marek Chodakiewicz – Professor of History and current holder of IWP’s Kościuszko Chair in Polish Studies – delivered the seventh in a series of biweekly brownbag lectures on “Intermarium: The Lands on the Edge.”

The topic of the lecture was the phenomenon of “Post-Communism,” defined by Prof. Chodakiewicz as communism-proper transformed. The easiest and most useful way to understand it is to visualize a slip of paper, labeled “communism,” and to crumple it into a ball. The resulting product is “transformed” but, nevertheless, maintains its essential properties. In this context, Prof. Chodakiewicz emphasized, it is important to eschew teleological fallacies often nurtured by the participants themselves, the post-communists in particular. Democracy was not necessarily the goal of transformation, nor was it an inevitable outcome.

Although the communists failed to achieve their initial objective – the salvation of the Marxist-Leninist system-proper – they nevertheless retained great power and influence. They no longer controlled a terror apparatus, but continued to dominate the security and intelligence agencies and benefited from a cowed subject population with lingering memories of the terror. In addition, the former oppositionists/dissidents – themselves inmates of the communist cage – often emerged as inept administrators and rulers. The post-communists, on the other hand, succeeded in portraying themselves as “professionals” and enjoyed the confidence of many mainstream Western political and business leaders. In addition, leftist and liberal ex-dissidents – motivated by knee-jerk anti-anti-communism and anti-nationalism – frequently preferred to side with the post-communists. Further, the post-bolsheviks tapped into the population’s entitlement attitude and employed moral relativism to avoid answering for their crimes (“everyone is guilty, so let us forget the past and ‘choose the future'”) to maintain power and influence.

One of the most significant features of post-communism was the overlap of the business, mafia, and post-communist political machines. After all, the chekists spawned the most notorious mafia gangs while their agents miraculously emerged as billionaire-oligarchs. In fact, the post-Soviet mafia was organized along the command structure of the Soviet KGB. Political parties themselves – and, in particular, ideological special interest groups, such as gay liberation, feminist, and environmentalist movements – functioned as vehicles for oligarchic power. In addition, the vast network of agents (agentura) operated by the secret police remained ensconced throughout the system. Whatever vetting of agents occurred – particularly in the Baltic states – revealed mostly inactive assets.

Yet, post-communism is a multi-faceted phenomenon characterized by other aspects as well. Nationalism – in its numerous manifestations – continues to exert an important influence on the hearts and minds of the populations of former communist countries, as does religion. In addition to traditional denominations native to the Intermarium, such as Latin and Greek (Uniate) Catholicism, and Orthodoxy, the region also boasts of small pockets of Jews, Karaites (Talmudless Jews), and Muslims (mostly Tatars). Various Protestant Evangelical churches have also proselytized throughout the Intermarium, although they have been subjected to harassment as “sects” in Russia, Belarus, and Eastern Ukraine. The churches in post-communist countries, and especially the Orthodox ones, have also suffered from the problem of the residual communist agentura which had infiltrated them for decades. Last but not least, issues such as the struggle between the followers of the Moscow Patriarchy and the Autocephalous Patriarchy of Kiev in Ukraine complicate the picture further still.

Another influential current is globalism, understood as a set of features emanating from the American center and common throughout the world. Globalism may be classified into two types: a Western one characterized by an emphasis on ordered liberty based upon a transcendental moral order, Christianity, moral absolutism, and private property; and an anti-Western, morally-relativistic, and post-modernist variety antagonistic towards religion, liberty, and property. The latter current has been particularly aggressive in post-communist countries, which are seen as a tabula rasa.

In general, Dr. Chodakiewicz concluded, the further east one travels in the Intermarium, the more features of communism-proper may be observed. Former East Germany constituted the best-case scenario in this respect, for the country was essentially absorbed by a non-communist entity (West Germany). The German government implemented an immediate decommunization, which included the verification of degrees of communist-era professors. Yet, Stalinists were often replaced by Trotskyites or various New Leftists. In addition, no property restitution occurred in former East Germany. The government poured billions of Marks into the post-communist economy of the East, but poor work ethic inherited from Marxism-Leninism hampered recovery. Thus, the case of case of post-communism serves to demonstrate the lasting damage inflicted by revolutionary, totalitarian systems.