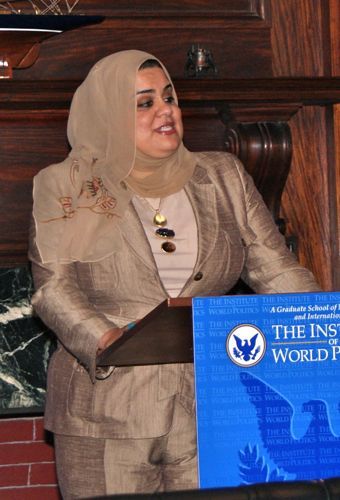 On Tuesday, May 18, Zainab Al-Suwaij, co-founder and Executive Director of the American Islamic Congress (AIC), discussed “How Islamists are hurting Muslims, and what we can do about it.”

The event began with IWP President John Lenczowski’s introduction of Dr. Juliana Pilon, the director of the new Center for Culture and Security at IWP. The Center’s Abrahamic Conversations – The Interfaith Outreach Narratives (ACTION) Project sponsored the lecture. Dr. Lenczowski explained that this Center was created to formalize IWP’s interest in the role of ideas, values, and belief systems that lie at the heart of the purposes of states and non-state actors. Dr. Pilon also explained the importance of the new center at IWP in fostering communication and disucssing common human goals, as well as the significance of a talk about how radical Islamists are hurting Muslims from a woman who is a Muslim herself. She proceeded to describe Ms. Al-Suwaij’s career and many accomplishments.

Ms. Al-Suwaij began her discussion by describing her background growing up in Iraq with neighbors of different religions, including Muslims, Christians, and Jews, but under a dictatorship that did not allow the free expression of these beliefs. In school, she was even told that Hitler was a great man, probably as a result of pressure from the regime. Later, she participated in the uprising agains Saddam Hussein, and moved to America.

Ms. Al-Suwaij proceeded to provide background about the Muslim world in general, pointing out the fact that it is extremely diverse, and cannot be reduced to one geographic location or viewpoint. Also, public opinion in Muslim countries, particularly about the US, remains in flux. She also described the radical Islamist element that is here in America.

After 9/11, she found that radical Islam was not only hurting Westerners, but moderate Muslims, as well. She was disappointed by the anti-American sentiment that existed at many Islamic events and conferences, and she felt the need to have the voice of moderate Muslims work to change radicalism from within the religion itself. She wanted to mobilize Muslims who were proud of their American citizenship and Muslim religion and culture.

Ms. Al-Suwaij proceeded to found the American Islamic Congress, which does this type of outreach, and provide a platform for moderate Muslims to voice their viewpoints. AIC particularly works to counter radical Islamists to engage young people. It does work on college campuses, and runs an essay contest for young Muslims. It also works to train young Muslims and Arabs about how to be activists in their communities against radicalism.

Questions included inquiries about public diplomacy in the Muslim world, the use of the internet to combat radical Islam, whether Islam has a tradition which encompasses natural law similar to what exists in Christianity and Judaism, France’s laws concerning headscarves, and the role of politics in the interfaith tradition. 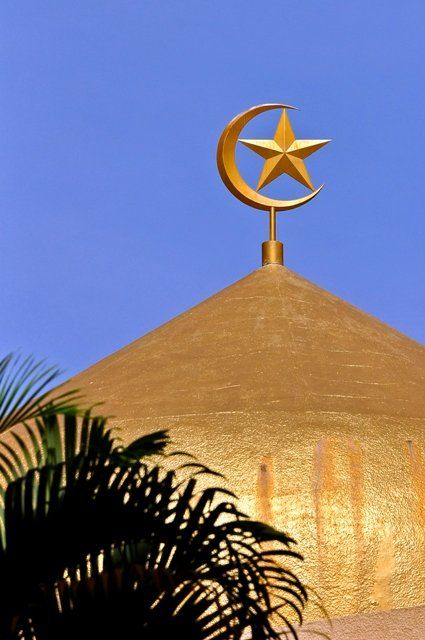 Ms. Al-Suwaij is the co-founder and Executive Director of the American Islamic Congress (AIC), a non-profit established in the wake of the September 11 attacks to build interfaith understanding; mobilize a moderate voice in the American Muslim community; and promote civil rights in the Muslim world.

Al-Suwaij’s personal mission is to promote a positive Muslim-American voice that strengthens interfaith relations and addresses the many challenges in the Muslim world.

Al-Suwaij was born in Basra, Iraq, in 1971. After participating in the failed 1991 uprising against Saddam Hussein (an experience she recounted in a memoir for The New Republic), she fled to the United States. The granddaughter of Basra’s leading cleric, she is a Hashemite, a direct descendant of the Prophet Muhammad. Al-Suwaij characterizes her personal religious beliefs as a hybrid of traditional and progressive.

Al-Suwaij leads interfaith and tolerance programs for mosques, churches, synagogues, colleges and high schools. She has developed classroom curricula; works with the Anti-Defamation League; and serves on Connecticut’s Hate Crimes Advisory Board. She is a board member of George Mason University’s Center for World Religions, Diplomacy, and Conflict Resolution and has been named an Ambassador for Peace by the Interreligious Federation for World Peace.

Al-Suwaij has testified to the Senate; briefed the President and Secretary of State; and works with Congressional leaders from both sides of the aisle. Her writing has appeared in numerous publications, including The Wall Street Journal, New York Times, Boston Globe, and Hartford Courant. Al-Suwaij has been interviewed on NPR, CNN, Fox, and Al-Jazeera. She has lectured at Harvard, Yale, Georgetown, and many other campuses. She spoke alongside George Clooney at a massive April 2006 rally to Save Darfur in Washington, DC.

Since the toppling of Saddam Hussein, Al-Suwaij has been working in Iraq to strengthen women’s rights and help rebuild the Iraqi education system. She led the Iraqi Women’s Educational Institute, which trained female civil society activists in principles of democracy and civic leadership. Al-Suwaij co-founded the Iraqi Women Higher Counsel – which successfully lobbied the Iraqi Interim Governing Council to mandate 25% of parliamentary seats for women.

Al-Suwaij’s latest initiative is HAMSA, a project that unites Americans to support human rights activists in the Middle East. She helped launch an essay contest for young Middle Easterners on the importance of individual rights, serving on a judging panel with Azar Nafisi, and Gloria Steinem. Al-Suwaij also directs the AIC’s Washington office, promoting a progressive Muslim agenda to political leaders and policy makers.