On Tuesday, February 22, 2011, David Archibald, an Australian scientist working in the fields of oil exploration, medical research, climate science and energy, spoke at IWP on “Climate and U.S. Energy Security.”

He started his presentation by putting current climatic conditions within the context of recent and historic records, and asked the question, “Is the world warming?”

Through various graphs showing temperature trends up to millions of years ago, Mr. Archibald showed that there has not been a change in average temperature since 1976, when the Great Pacific Climate Shift triggered the normal thirty-year cycle of warmer weather from colder temperatures. In fact, he explained, it was much warmer 1000 years ago – so much so that the sea level was a meter higher than it is at present.

Mr. Archibald then posed the question, for which he is famed in the climate debate, of whether carbon dioxide was linked to global warming. While the carbon dioxide heating effect is real and related to warming, it is minuscule and logarithmic.

Mr. Archibald said the logical reason for temperature increase is the sun. Predicted solar activity is used to predict climate, and the current prediction is for a 24-year cold period similar to that experienced at the beginning of the 19th century. In turn, the agricultural consequences of that cold period will be significantly reduced Canadian and other high-latitude grain production, drought in East Africa and South America, and reduced monsoonal strength in Asia.

Simultaneously with this colder-climate stress on agricultural production, world oil supply will shrink with a dramatic price response. Mr. Archibald stated that we “have to leave oil before oil leaves us,” as it is becoming scarcer and costlier to extract. China’s oil consumption has increased dramatically, and by the end of the decade, their import demand will be roughly the same as that of the United States.

When the price of a barrel reaches $120, Archibald believes it would be worthwhile to switch to coal or other forms of fuel that are cheaper to produce. Price substitution effects will drive the building of coal-to-liquids plants to serve the transport fuels market, and nuclear power will supplant coal in the power market. Thorium in molten salt reactors is advocated as the optimum nuclear process, as it produces less than 1% of hazardous waste, is far less toxic, and there is no long-term waste.

Mr. Archibald concluded his presentation with the outline of a plan for U.S. energy independence by 2020, which predominantly involves switching to natural gas and adopting the correct science, rather than getting caught up in internal politics.

Please click here to view the power point that accompanied his presentation:

More information about David Archibald and his work is available at www.davidarchibald.info. 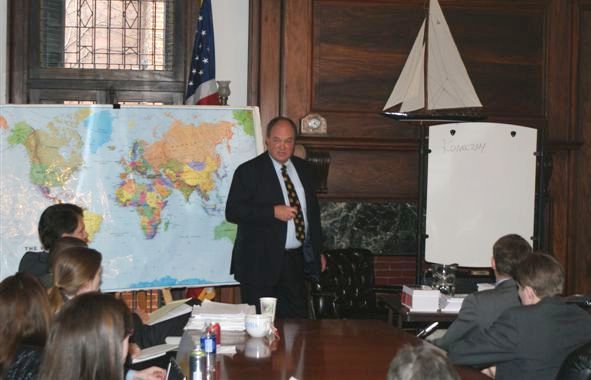