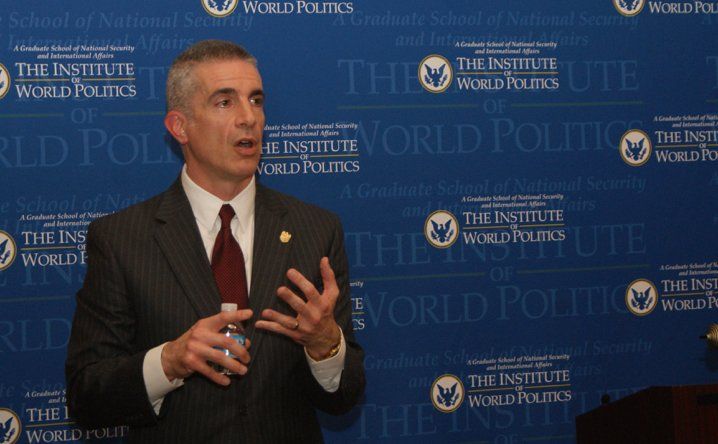 On November 2, 2015, The Institute of World Politics welcomed Andrew L. Traver, the director of the Naval Criminal Investigative Service (NCIS), who spoke on the current state and future of the NCIS, its mission and professional opportunities within the organization. This event was sponsored by IWP Career Services.

Director Traver began by telling about his own background and the road to where he is now, including his time at Officer Candidate School, followed by a period as a commissioned officer in the Navy. After that he spent 26 years at the ATF as an agent, and was nominated by President Barack Obama for the position of director of the ATF. Ultimately, however, he became the director of the NCIS, the second director to come from outside the organization and the first ATF agent to ever be nominated.

Director Traver delved into the organization and the kind of work that the NCIS does, including investigating all manner of felony crimes such as fraud, arson, homicide and more. The organization has investigators embedded in various Navy and Marine Corps commands to prevent fraudulent activity such as counterfeit parts substitution, something that could be disastrous should these defective parts be introduced into the supply chain. Furthermore, the NCIS is heavily involved in counterintelligence and counterterrorism. Director Traver described a recent case in which a Navy civilian was sentenced to 11 years for attempted espionage for trying to provide schematics of the Navy’s newest nuclear aircraft carrier to Egypt. Currently, the NCIS has 13 geographic field offices, of which 4 are abroad in places such as Italy, Bahrain, Singapore and Japan.  Around one third of NCIS special agents are assigned to work overseas.

The NCIS currently faces some issues that Director Traver outlined in his presentation. The foremost of these are bureaucracy and recruitment/retention. As a relatively small organization that prides itself on agility and responsiveness, the size and slowness of the federal bureaucracy can present a challenge. This is compounded by the agency’s limited resources and the difficulty of competing with the private sector to retain talent. Those who work for NCIS are primarily attracted by its fulfilling mission of safeguarding the Navy and Marine Corps against criminal, terrorist and intelligence threats.

Director Traver also mentioned the TV show “NCIS,” and the impact that it has had on the organization. While the application numbers for open positions have increased by a tremendous amount, some applicants confuse the Hollywood image with the real work that the NCIS does. In addition, educating members of Congress and their staffs as to NCIS’ real work and function is an ongoing task for the organization.