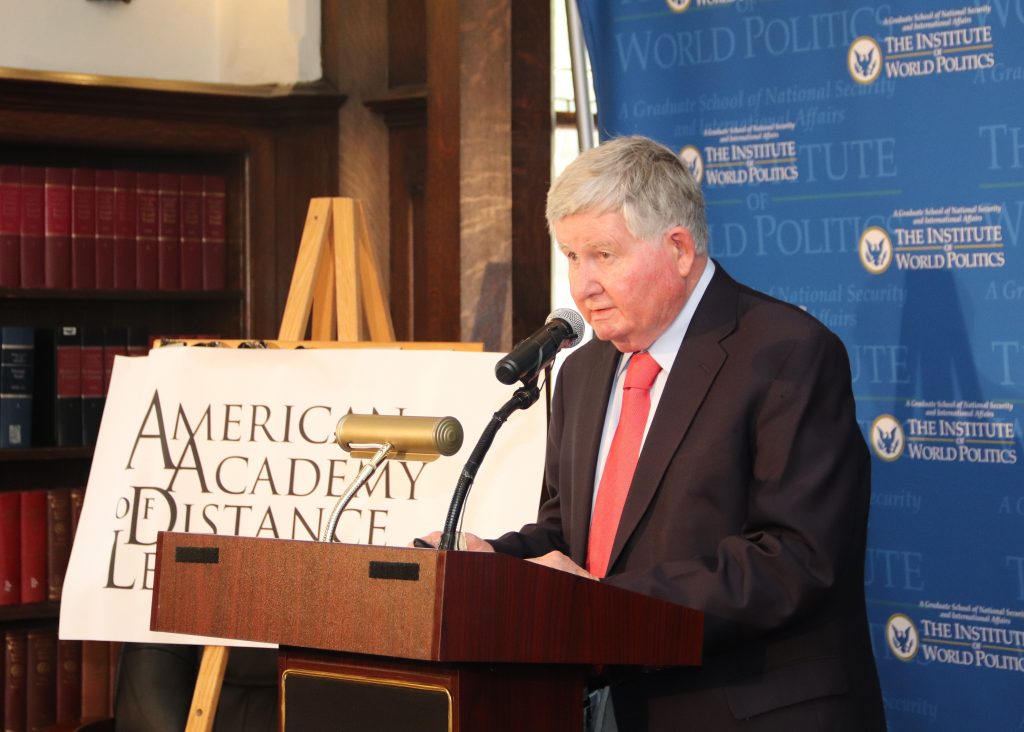 Dr. Bishirjian was the first of the panelists to share his views on the topic of loss of country. His lecture discussed the loss of 17th Century China. It was during this period that the Mongols invaded China, causing many of the Chinese intellectual class to feel as if they had lost their true country. This was followed by the establishment and eventual loss of the last dynasty: the Qing Dynasty.

Dr. Bishirjian focused on whether the reclusiveness of 17th Century China was responsible for its eventual loss of country. The Chinese disengagement came from an idea that reclusion was a way to achieve artistic expression through clarity of mind, or by holding superior virtue. Many of the Chinese artist-scholars during this time period who were recluses focused on their spiritual well-being and often ignored the political strife of the times. During this period, the last dynasty fell and was eventually replaced by a new form of government in China.

Dr. Bishirjian was founding president and professor of government at Yorktown University from 2000 to 2016. He is the editor of A Public Philosophy Reader and The Conservative Rebellion (2015) and The Coming Death and Future Resurrection of American Higher Education (2017). Dr. Bishirjian authored professional essays in The Political Science Reviewer, Modern Age, Review of Politics, Anamnesis and The Imaginative Conservative. He has published essays in Chronicles and the American Spectator. Dr. Bishirjian served as an Editorial Advisor, and contributor, to Modern Age. Dr. Bishirjian is completing a novel titled “Coda,” about national politics, presidential ambitions, personal tragedy, and rebirth. Dr. Bishirjian is currently serving as the president of the American Academy of Distance Learning. 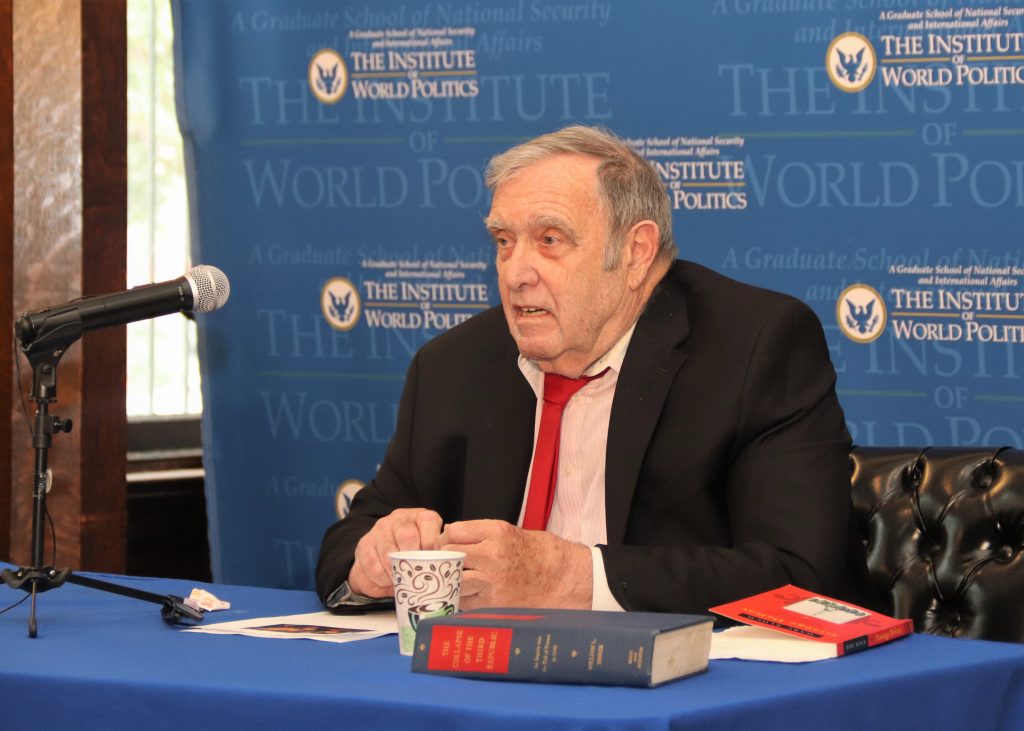 Dr. Jack Tierney discussed the loss of France in 1940, which was a direct result of the first World War. In order to understand what happened in France, an understanding of what “loss” really means must first be established. To “lose” your country means to see the disappearance of your government or to see a societal change in belief systems. National security policy seeks to prevent the loss of country. It is important to understand what, if any, patterns exist when a country is lost, in order to learn from what happened and to prevent the same in the future.

Dr. Tierney stated that countries do not “die natural deaths;” they either face internal or external issues that lead to them being lost. With this lens, a civil war would be considered a “suicide” of sorts, while war or other external factors would be a “murder.” Most often, a country is lost via a combination of internal and external factors.

In the case of France, Dr. Tierney referred to a book written in 1940 called Strange Defeat. This book, in Dr. Tierney’s words, was “an indictment of the entire society.” The internal issues that plagued France were the reason it fell in World War II.

In 1919, France was one of the most powerful countries, yet it fell in an uncommon manner. France fell in five weeks after the start of the war, while other countries, such as Britain, lasted through severe attacks for significantly longer. After the Treaty of Versailles, many of the individuals in top military and political positions in France predicted the country would fall.

In the period following the Treaty of Versailles, there had been 37 changes in the French government in the span of 20 years. The U.S. had only two during the same period, and England had only one. This lack of stability is what caused France to fall apart when invaded by Germany in 1940. The French military was ultimately not prepared for the German advance, particularly Germany going around France’s defenses at the Maginot Line.

Dr. Tierney concluded that France fell because the government was in the middle of a transition, while the military was unprepared to fight a war which was inherently different than World War I. With the strained diplomatic relations at the time, especially the split in the British view on appeasement and the U.S. avoidance of war, France had no significant assistance until it was much too late.

The other French allies pulled out of their pacts, and the Soviet Union even signed a new pact with Germany. Thus, as a result of external and internal turmoil, France fell in 1940.

Dr. Tierney then turned to the current situation to draw comparisons with France. He does not believe that the U.S. is repeating the same mistakes that France did. Our modern threats are no more capable of destroying our democracy than those of the past. 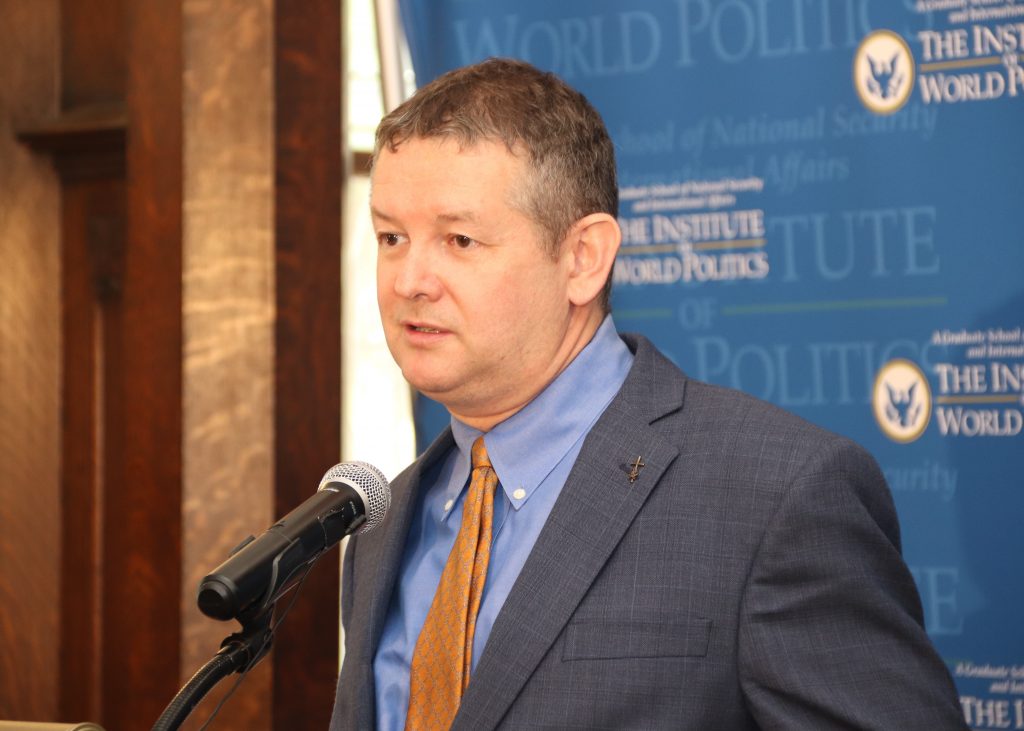 Losing One’s Country Twice, Finding it Once: The Case of Poland

Dr. Chodakiewicz’s presentation focused on the history of Poland, drawing from his own personal experiences and Polish background. Entitled “Losing One’s Country Twice, Finding it Once,” his lecture examined the difference between losing a country mentally and physically. “When something dramatic happens,” Dr. Chodakiewicz said, “most of us don’t realize what’s going on, that we’re losing our country.”

Dr. Chodakiewicz began the lecture by describing Poland during the medieval period of the Jagiellonian dynasty, in which Poland became the freest society in Europe. During this period, there were no property qualifications for nobility, and rights such as habeas corpus became entrenched in the government. In 1505, the Commonwealth of Poland had elected kings, a two-chamber parliament, checks and balances, and most notably, a franchisement of 10-15% of the population, which wasn’t matched until Jacksonian democracy in the U.S. In 1573, the Commonwealth also granted to its citizens the freedom of religion.

However, due to divides in its Parliament, corruption, and foreign lobbying, the Commonwealth deteriorated after a few centuries. During this time, Poland’s neighbors, Prussia, Russia, and Austria, took over Poland. Dr. Chodakiewicz told the audience that the Commonwealth may have been destroyed, but the memory of freedom lingered, and “that’s what sustained us.”

Dr. Chodakiewicz then explained that after World War I, the Poles tried to put the Commonwealth back together, but twenty years was not enough time. Their efforts were interrupted by World War II. During the span of the war, Poland lost 11 million people, which was over a third of its population. The Polish people were facing terror on both fronts, with the German Nazis putting them into concentration camps while the Soviets were sending them to the Gulag. Both were systematically killing the Polish intelligentsia. Dr. Chodakiewicz described this as a carefully selected effort to eliminate the ethos of service that had come to define the Polish culture, saying that it was “social engineering through murder.”

After 1945, Poland was under Soviet occupation, and Polish communists were given increasing autonomy over the country. The communist years were fraught with rebellions, in particular, the Solidarity movement in the 1980s.

In recent years, Dr. Chodakiewicz said that communism has transformed itself into post-communism. With only 30% of seats in Parliament being truly open to elections, he argued that free elections do not actually exist in Poland.

Going forward, Dr. Chodakiewicz believes that democracy is not the only thing necessary to bring justice to Poland; there must also be restitution in order to create an even playing field for the future. Without justice, there can be no peace.

Dr. Chodakiewicz concluded the lecture with the idea that losing a country physically does not mean that you have to lose it mentally, saying, “For so long as you remember it, it’s there.”

Dr. Marek Chodakiewicz holds The Kosciuszko Chair in Polish Studies at The Institute of World Politics, where he also serves as a Professor of History and teaches courses on Geography and Strategy, Contemporary Politics and Diplomacy, Russian Politics and Foreign Policy, and Mass Murder Prevention in Failed and Failing States. He is the author of Intermarium: The Land Between the Black and Baltic Seas and numerous other books and articles.