On September 16th, 2020, The Institute of World Politics hosted its Annual Constitution Day Lecture as a webinar presentation on the topic: How the Civil War Completed the Constitution: A 2020 Perpetuation Address with Dr. Ken Masugi.

Dr. Ken Masugi is a Senior Fellow of the Claremont Institute and a Senior Contributor to the online journal, American Greatness. He is also a lecturer in Government at the Johns Hopkins University Center for American Government in Washington, D.C.

Dr. Masugi has also taught at the U.S. Air Force Academy, where he served as Olin Distinguished Visiting Professor, and the Ashbrook Center of Ashland University.

He has served ten years in the federal government as a speechwriter for Cabinet Department heads and as special assistant for the then-Chairman of the Equal Employment Opportunity Commission, Clarence Thomas.

Dr. Masugi has co-edited or co-authored a dozen books on American politics and political thought, most recently The Rediscovery of America: Essays by Harry V. Jaffa on the New Birth of Politics and Unmasking the Administrative State, both in 2019, by John Marini. He is currently working on a book manuscript, Unequal to Equality: How America Betrayed Its Revolution. 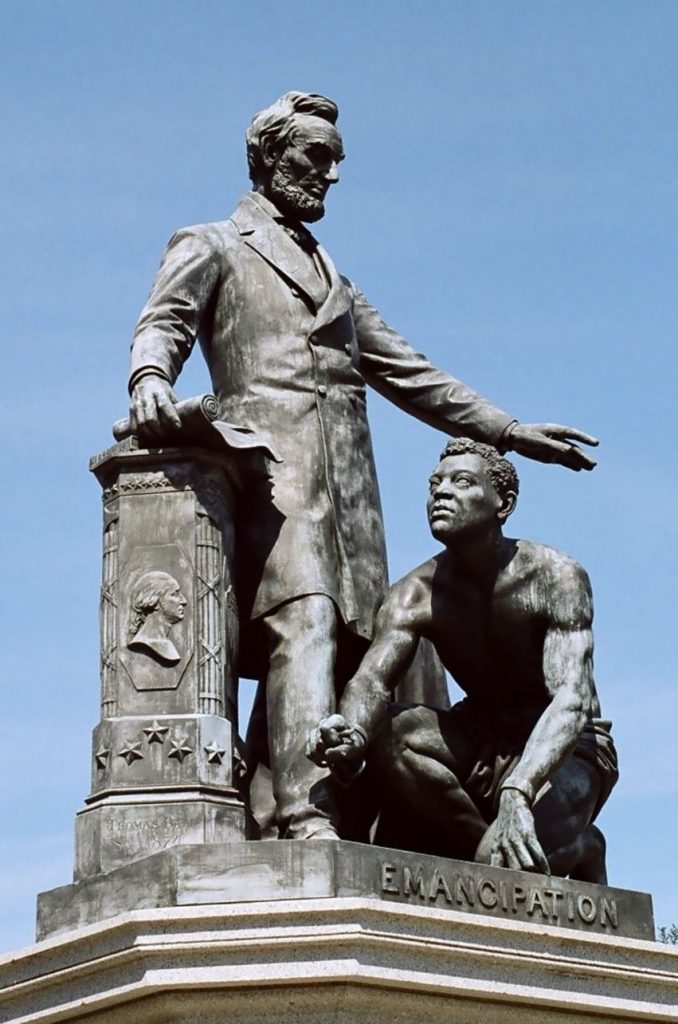 Dr. Masugi began the webinar by addressing the question of whether America is a land to be proud of or ashamed of. He went on to share the story of the Freedman’s Memorial, which depicts a former slave unshackled and rising. Dr. Masugi contrasted recent protests for the memorial’s removal against the extraordinary crowds that celebrated its unveiling on April 14th, 1876, stating that controversy here exists where none should. Dr. Masugi further contended that the current race-obsessed understanding of slavery produces perverse policies and attitudes out of passion rather than reason.

Dr. Masugi then turned to defining slavery using the words of Abraham Lincoln. In his July 8, 1858 celebration of the Declaration of Independence, Lincoln defined slavery as “You work. I eat.” Dr. Masugi contended that Lincoln’s entire approach to abolishing slavery distinguished it from a race issue. He pointed to the fact that while a constitutional amendment was needed to prevent one person from owning another, such measures were not necessary for resolving other race issues like voting rights or becoming president. The need for a constitutional amendment to address the issue of slavery, Dr. Masugi said, is proof of a difference between slavery and various other natural distinctions such as race. Dr. Masugi discussed how Lincoln’s paramount struggle was to preserve the Union, not to save or destroy slavery. He asserted that Lincoln succeeded in preserving the Union by emphasizing legal and moral logic, his oath of office, and the need for political compromise in the face of Southern secession. Dr. Masugi believes that Lincoln sought to frame secession as even more morally indefensible and wicked than slavery because it rejected democratic procedures, a fair majority vote, and a rightfully elected president.

Although the Civil War ended with the freeing of slaves, Dr. Masugi argued that this result did not make Lincoln an abolitionist. Lincoln preferred to address slavery through the addition of anti-slavery states to the Union, the market forces of industrialization and trade, and by bringing the U.S. back to the moral acuity of its founding. According to Dr. Masugi, Lincoln purposefully stood ambiguous on the issue of slavery to appear accommodating and negotiable, putting the decision of war or peace on the South. Dr. Masugi contended that Lincoln chose this path because he understood that the abolishment of slavery could only be achieved as a union and, more importantly, that the nation could only survive as a union.

Slavery and the Constitution

Dr. Masugi reasoned that slavery was deliberately unmentioned in the Constitution because the Founders believed that the practice of slave ownership would eventually die out. Instead, the Founders made their objection to slavery clear in the Declaration of Independence but did not abolish the practice of slave ownership. Dr. Masugi then pointed out that the omission of slavery from the Constitution caused confusion during the Civil War because Article 4 Section 2 of the Constitution, which gives citizens all the rights that they would have in other states, was unclear on the issue of slavery. Dr. Masugi explained that this clause was largely debated – could a slave-owner take his slave anywhere in the country, or would a free black citizen retain his rights in a slave state? Dr. Masugi elaborated on how there were always compromises on how that clause was applied.

The Emancipation Proclamation purposefully did not free the slaves

Dr. Masugi believes that the Emancipation Proclamation synopsized Lincoln’s strategy and principle even though it did not free any slaves in the Union. He argued that the Emancipation Proclamation could not have succeeded if it had because its success relied on the appearance of moral indifference, which was crucial as Lincoln strategically relied on Union forces from the slave states of Kentucky and Virginia, as well as the neutrality of Missouri.

He noted that Lincoln had to be particularly careful that the Emancipation Proclamation did not free any slaves in loyal states because of the controversial nature of executive orders themselves. Later in the Civil War, Lincoln would assert that if black Americans are to fight in the war, they deserve the same protections as any other soldier. Dr. Masugi contended that this assertion is what helped solidify Lincoln’s wartime proclamation into the 13th Amendment.

Dr. Masugi emphasized that because of the 13th Amendment, we now read the Constitution in light of the Declaration of Independence, as the framers intended, and this justifies their original decision to omit the word “slave” from the document. In closing, he referenced Flannery O’Connor’s short story “Everything That Rises Must Converge” and encouraged the audience to remember the injustice of slavery and our common political past when we celebrate Constitution Day.