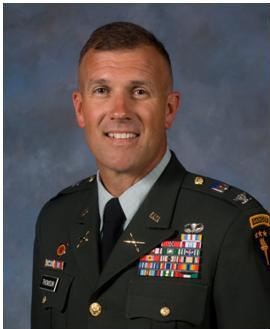 The first senior fellow to be sent by the US Army has arrived at The Institute of World Politics.

The fruit of several months of discussion between IWP and the Army has been the Institute’s selection as one of only a small number of academic institutions nationwide that host Senior Fellows.  Col. John Thomson USA (pictured at left) is the first such officer to be posted at IWP.  During the 2008-2009 academic year he will be pursuing scholarly research and writing in consultation with IWP faculty members as well as attending Institute classes.

The officers assigned by the Army to the Senior Fellow program are colonels or lieutenant colonels likely to become general officers.  The fellowship at IWP represents an elite status for both the officer and the Institute, permitting future senior leaders to participate fully with professors and students in the classroom and in research activity.