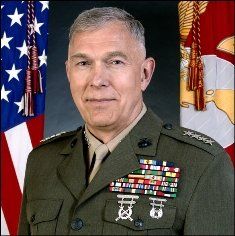 The Institute of World Politics is pleased to announce that General James T. Conway, Commandant of the United States Marine Corps, will deliver the keynote address at the Institute's 13th annual Pearl Harbor Day Dinner.

The dinner will be held on Friday, December 5, 2008 at the Mayflower Hotel in Washington, DC.  The event begins at 6:30 pm.  Persons interested in attending the dinner, proceeds of which benefit the mission of the Institute, may contact Thomas Ranieri by email or at 202-462-2101.

General James T. Conway is a graduate of Southeast Missouri State University. He was commissioned in 1970 as an infantry officer. His company-grade assignments included multiple platoon and company commander billets with both the 1st and 2nd Marine Divisions; Executive Officer of the Marine Detachment aboard the USS Kitty Hawk (CVA-63); series and company commander at the Marine Corps Recruit Depot in San Diego; aide to the Commanding General; and Director, Sea School.

As a field grade officer, he commanded two companies of officer students and taught tactics at The Basic School; he also served as operations officer for the 31st Marine Amphibious Unit to include contingency operations off Beirut, Lebanon; and as Senior Aide to the Chairman, Joint Chiefs of Staff. Promoted to Lieutenant Colonel, he was reassigned to the 2d Marine Division as Division G-3 Operations Officer before assuming command of 3d Battalion, 2d Marines in January 1990.

After promotion to Major General, he assumed command of the 1st Marine Division. In November 2002, Major General Conway was promoted to Lieutenant General and assumed command of the I Marine Expeditionary Force. He commanded I Marine Expeditionary Force during two combat tours in Iraq. In 2004, he was reassigned as the Director of Operations, J-3, Joint Staff, in Washington, D.C.