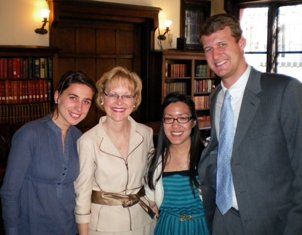 On Thursday, April 16, 2009, Ambassador Aldona Wos spoke at IWP about her personal experiences of and thoughts on public diplomacy, particularly regarding her time as the U.S. Ambassador to Estonia from 2004 to late 2006.  Ambassador Wos, a medical doctor, serves on the Institute’s Board of Trustees and received an honorary Doctorate of Laws from IWP in June 2006.

The Ambassador spoke about how she set public diplomacy as the number one goal for the U.S. embassy in Estonia, despite protests at the time from the State Department.  The State Department later honored her for her efforts in this realm. Ambassador Wos described her experiences developing relationships with many Estonian people, visiting schools, places of work, government officials, etc.  She also addressed the question of the greater difficulty in conducting public diplomacy in other, less safe nations, but explained the necessity for each member of American embassies and, indeed, every American abroad, to be concerned about representing America and its values.

Attendees enjoyed her anecdotes, humor, and intelligent analysis of the importance of public diplomacy. At left she is pictured with three IWP interns who were recognized by Ambassador Wos for their invaluable assistance to the Institute.