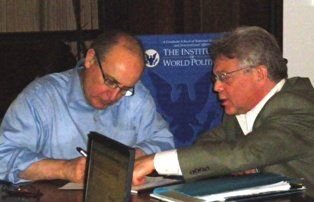 Following the Islamic Revolution of 1979, Dr. Sazegara served in a number of senior positions in the Iranian government, including managing director of the national radio service and vice minister of planning and budget.  Becoming disillusioned with the government in the late 1980s, he left its service and pursued the study of history.  He published several dissident newspapers and attempted to run for Iran’s presidency in 2001.  Dr. Sazegara was arrested by Iran’s Ministry of Intelligence in 2003; after his release he moved to the United Kingdom and then the United States.