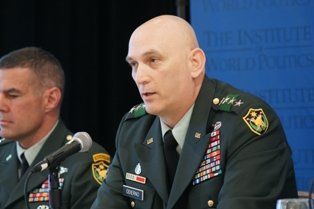 General Ray Odierno, Commanding General, Multi-National Forces – Iraq, participated in a panel discussion hosted on May 12, 2009 by The Institute of World Politics.  The discussion was entitled “Strategic Transition in Iraq: Challenges and Opportunities on the Path to Stability.”

GEN Odierno thanked The Institute of World Politics for inviting him to participate in the event.  He remarked, “IWP’s commitment to developing leaders in foreign affairs, intelligence, and national security, with emphasis on statecraft and integrating the various instruments of power is critical in today’s increasingly complex strategic environment.”  In the General’s remarks, he explained some of the intellectual foundations of the surge of early 2007, as well as the progress made towards a stable, secure, and sovereign Iraq and the remaining dangers confronting the nation.

Hundreds of invited guests participated in the event, which was held at the Mayflower Hotel in Washington.  IWP students, faculty, staff, and benefactors were joined by officers of all branches of the United States armed forces, officials of the U.S. State Department, staff members of the National Security Council, and numerous other senior government officials and policy experts.

The Institute of World Politics is a graduate school of national security and international affairs, dedicated to developing leaders with a sound understanding of international relations and the ethical conduct of statecraft, based on knowledge and appreciation of the principles of the American political economy and the Western moral tradition.  The Institute frequently hosts events featuring senior scholars and practitioners whose insights into contemporary issues of statecraft provide first-hand examples to its student body and, when possible, members of the public.

In conclusion, Dr. John Lenczowski, founder and president of the Institute, remarked: “I am grateful to General Odierno, Admiral Buss, and General Salazar for honoring the IWP community by addressing so many meaningful and timely questions about U.S. policy and practice in Iraq.” 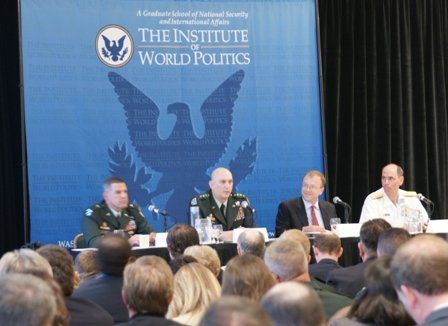