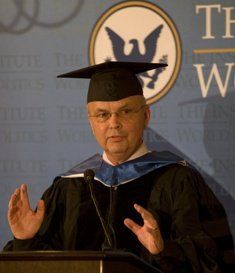 “It’s a real honor for me to be here among you – not just to be here to recognize your achievements, but it’s an honor to me that you have asked me to be included in such company, to be included in your company.  By going through this program, by earning and accepting this degree, you have made a decision; you have opted to enter a vocation – not a job, not a task, but a vocation.”

That’s what General Michael V. Hayden, the former Director of the Central Intelligence Agency and National Security Agency, told the Class of 2009 of The Institute of World Politics at their Commencement Exercises on Saturday, June 6.

General Hayden explained: “I emphasize that idea of vocation because I know what The Institute of World Politics is all about.  I know the principles that have animated it.  I know the values that have become part of you because of your formation here.  And so it’s your embracing of these values, it’s your acceptance of this vocation that motivated me to be here, and frankly, I think, honors me by your including someone like myself in your circle.”

The General joined an audience of IWP Trustees, faculty members, staff, benefactors, students, and families in recognizing the academic achievements of the Class of 2009.  In his remarks to the Class of 2009, he emphasized two key personal virtues essential for a life of public service in the world of international affairs and national security: “You need to be wholly what you are – and for most of you that means being an American, a citizen of this country – as well as being wholly a responsible global citizen, a member of humanity that reaches beyond national identities.”  He noted that in his view these two concepts are complementary, not contradictory: “You can’t be fully an international citizen without fully embracing the identity of what it is you are…. For most of you that means being American.”

General Hayden has devoted more than four decades of his life to the service of the United States, chiefly in roles related to intelligence.  In addition to service as an officer in the U.S. Air Force, he has been Director of the National Security Agency, Deputy Director of National Intelligence, and Director of the Central Intelligence Agency.  He concluded his remarks on June 6 by reminding the audience of a renowned passage from the Gospel of St. John: “‘Ye shall know the truth, and the truth shall make you free.’  That, I believe, is your task.  I envy your future.” 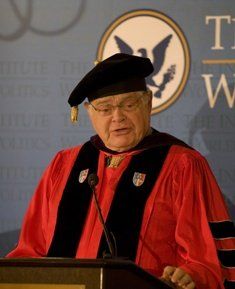 The Valedictorian of the Class of 2009, Kemal Obi E. Okudo, a Nigerian national awarded the Master of Arts in Statecraft and National Security Affairs, spoke on behalf of his fellow graduates in telling the Institute’s faculty, “We remain immensely inspired by the resourcefulness, character, personal experiences, profound brilliance, humility, and deep patriotism of the faculty and staff at IWP.  You can all be assured of the positive legacy you are bequeathing to future generations and to this greatest country on earth.”

Mr. Okudo elaborated on the ceremony’s themes of fulfillment of one’s vocation and employment of moral rectitude in the national service: “We will always be proud ambassadors of the Institute and will always have the courage of our conviction and the strength of character, to consistently choose the harder Right instead of the easier Wrong in all situations.”

Also recognized in the ceremony was Col. John Thomson USA, the Institute’s first Senior Army Fellow under the Senior Service College Fellowship Program under which an elite group of graduate schools provide education for selected field-grade officers that is the full equivalent of attending the U.S. Army War College or the National War College.  Dr. Lenczowski praised Col. Thomson’s achievements while at the Institute, and noted many of his contributions to the academic and social life of the school.

During the awarding of Master’s degrees and Certificates of Graduate Study, Dr. Lenczowski introduced the members of the Class of 2009 to the audience, as well as describing students’ achievements at the Institute and their future plans.

To conclude the ceremony, Lawrence Buckley (IWP 2007) formally welcomed the Class of 2009 to membership in the Institute’s Alumni Association.

Portions of the Institute’s Commencement Exercises were televised on C-SPAN in following days.  More information about the event and the speakers’ remarks may be obtained by contacting the Institute.