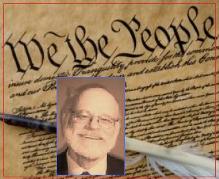 In a spellbinding speech that brought the American Founding alive, Professor Charles Smith marked Constitution Day at an IWP lunch for students, staff, and friends.

IWP observed Constitution Day on September 17, the anniversary of the signing of the United States Constitution in 1787.

Professor Smith, a noted historian, reminded a lunchtime audience of the enduring political and philosophical principles that guided the authors of the Constitution. He spoke of Aristotle’s reflections upon the nature of the ideal regime, Aquinas’s ideas about justice in society, the historic political shape of Anglo-American culture, and Washington’s exemplication of the classical virtues of statesmanship all helped to mold America’s highest law. Prof. Smith stressed how the Constitution refers to both classical and modern debates of law, justice, and statesmanship.

In his inimitable rhetorical fashion, he inspired the audience to embrace Constitutional values and to remember the virtuous statecraft of America’s founders.