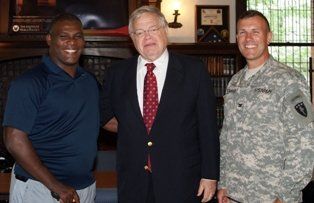 Col. John Thomson USA, who completed his studies as the Institute’s 2008-2009 Army Senior Fellow in June, has taken command of the 41st Fires Brigade, or “Railgunners,” at the unit’s garrison in Fort Hood, Texas.  The 41st Fires Brigade, which was initially formed in 1918 and has a distinguished battle history from the Second World War to more recent conflicts, has recently returned from a 15-month deployment to Iraq.

While at IWP, Col. Thomson participated fully in the life of the school, organizing numerous lectures and seminars as well as engaging in writing and research.  He is pictured at right, together with the Chairman of IWP’s Board of Trustees, Owen Smith (center) and the Institute’s second Army Senior Fellow, Lt. Col. Greg Gadson, at an IWP event in June.

For more information about the change of command ceremony and accompanying photos, please click here.