IWP students and alumni are competing with their counterparts at some of the top academic institutions around the world in Wikistrat’s 2011 International Grand Strategy Competition.

This simulation exercise, which is by invitation only, is taking place throughout June 2011, and is managed by former Pentagon strategist Dr. Thomas P.M. Barnett.  IWP is contributing two teams of ten students and alumni to the contest. One, led by John Poreba (Class of 2011), is playing the role of Turkey, while the second, led by M.A. candidate Katie Crombe, is playing as Brazil.

The IWP teams are working hard, and gaining valuable experience through their extracurricular efforts.  Vilen Khlgatyan, an IWP student who has been working on articles about Turkey’s regional future, has found that, “This competition has helped me further ingrain the idea that all facets of statecraft should be considered, as well as the many possible outcomes.”

IWP participants say that they feel well-prepared for the competition, because the exercise is similar to those practiced by students in Dr. Waller’s Public Diplomacy and Political Warfare and Professor Tsagronis’ Counterinsurgency and National Security Policy Process courses.

“Simulation exercises in Professors Tsagronis’ classes were incredibly beneficial in learning how to develop and write a coherent national strategy.  Our team members believe we are well prepared to answer the strategic problems posed by the judges in the Wikistrat competition.”

And recent graduate Gabriella Gervasio observes, “The Wikistrat exercise is truly the perfect ending to my education here at IWP.  It requires knowledge, expertise, and proper use of the elements of statecraft.”

WikiStrat is an organization that provides interdisciplinary strategic analysis and forecasting, showcasing the opportunities of globalization’s advance whilst managing geopolitical risk. 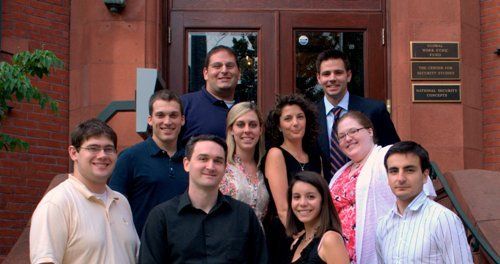