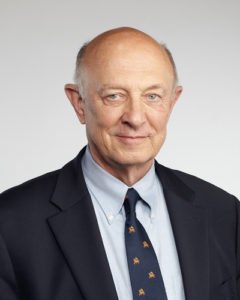 The Institute of World Politics is pleased to announce that Ambassador R. James Woolsey Jr. will join the Institute as Chancellor starting in November 2015. Amb. Woolsey previously served in the United States Government on five different occasions, where he held Presidential appointments in two Republican and two Democratic administrations, most recently (1993-95) as Director of Central Intelligence.

He was elected by the Institute’s Board of Trustees on Tuesday, October 13.

“Jim’s record of service to this country has few parallels,” said Dr. John Lenczowski, founder and president of the Institute.  “There is no more staunch defender of the security of the United States in this country. We are honored and delighted that he is ready to serve the mission of IWP.”

He was Under Secretary of the Navy from 1977 to 1979. He also served as general counsel to the Senate Armed Services Committee.

At IWP, Amb. Woolsey will conduct external representation for IWP through public speaking, media appearances, and commentary on current affairs.  He will develop opportunities by which IWP can deliver its curriculum and provide its intellectual product in other ways, such as executive education programs to government agencies, the armed forces, and the private sector.  He will also help the school with raising the necessary resources so that it can optimally achieve its mission.

“Jim Woolsey’s joining IWP as Chancellor brings a wealth of experience and knowledge to IWP,” said IWP Chairman Owen Smith. “His service as DCI is just a small part of the knowledge and experience that he will bring to our school. Our students will also have the opportunity to tap into his lifetime of experience in dealing with issues of national security, energy policy and intelligence.”

Amb. Woolsey received his B.A. from Stanford University (Phi Beta Kappa), his M.A. from Oxford University where he was a Rhodes Scholar, and an LLB from Yale Law School in 1968.