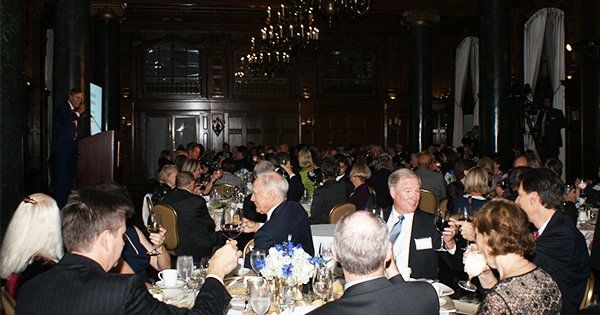 The Institute of World Politics concluded its Silver Anniversary Comprehensive Campaign this September by announcing a total amount raised surpassing $11.3 million.  The original goal of the campaign was to raise $10.25 million.  IWP supporters gathered at The Willard Hotel (pictured at right) to toast to the campaign’s success and hear from Campaign Chairman, John Lovewell, who confirmed not only the campaign goal’s realization, but also the successful finalized purchase of IWP’s Washington, DC campus.

The Silver Anniversary Campaign, announced by IWP in early 2015, began with the recognition of the school as the only graduate institution of its kind founded on the framework of moral leadership in statecraft, national security, and international affairs. Since the time of its founding in 1990, the Institute has been increasingly expanding its staff, faculty, and degree offerings, with the purchase of these buildings still furthering that growth.

The campaign was launched after IWP determined that it was at a turning point in its history. We conducted a Strategic Plan Assessment Study by interviewing twenty leading supporters to get their input on IWP’s strategic plan, which included a campaign plan. After receiving positive feedback about the Institute’s goals and strategies, IWP decided to proceed with its Silver Anniversary Campaign. “Ben Case of Case Consulting Services was instrumental in this assessment study,” said IWP Vice President of Institutional Advancement Tom Atwood. “He was very helpful in understanding the priorities of our supporters and potential supporters.”

The final results of the campaign include a sum total of $11.3 million made in gifts to the school. Of this, $3.1 million was recorded in pledges, which will provide a strong foundation for our fundraising for several years. The conclusion of this comprehensive campaign incorporated a Chancellor’s Council meeting and annual dinner, recognizing the donors whose contributions allowed for the overwhelming campaign success. 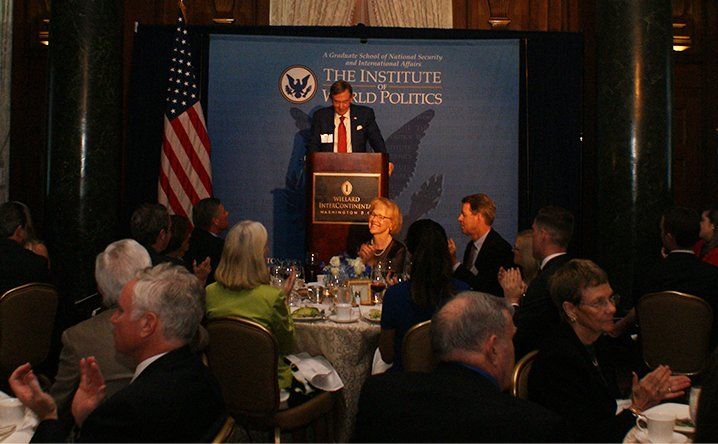 Dr. John Lenczowski, IWP Founder and President, expressed his appreciation for the continuous support of IWP donors and recognized several individuals. “I would like to thank Campaign Chairman John Lovewell for his invaluable leadership of this project. The success of the Silver Anniversary Campaign was made possible by the extraordinary work of Vice President Tom Atwood; IWP’s development team: Michelle Knight, Kathy Carroll, and Liliya Bychuk; and development consultant Ben Case.”

The Institute is particularly grateful to those who made major leadership gifts: Ambassador Aldona Woś and Louis DeJoy, Virginia James, John and Cynthia Lovewell, Owen and Bernadette Smith, and John and Betty Whitaker.

With their gift, John and Cynthia Lovewell chose to name one of IWP’s conference rooms in the headquarters mansion the Commodore John Barry Room. Commodore Barry is a relative of Mrs. Lovewell’s, and is known as the Father of the American Navy. Born in 1745, Commodore Barry left Ireland for America, where he served as an officer in the Continental Navy during the American Revolution and was appointed by George Washington as America’s first commissioned naval officer after the war.

With their gift, Amb. Woś and Louis DeJoy created the Amb. Aldona Woś, M.D. Scholarships, which will benefit IWP students for years to come.

“Altogether, IWP received 1,250 gifts in support of this campaign, and we are enormously grateful for each gift and every supporter,” Tom Atwood said.

“Our benefactors understand the important work that we are doing at the Institute,” said Dr. Lenczowski.  “They have chosen to put their dollars towards a school which is furthering the cause of peace and freedom for our nation and our world.”

Ultimately, the success of the Silver Anniversary Campaign has enabled The Institute of World Politics to continue in its mission to educate the next generation of American leaders in the arts of statecraft through the purchase of a permanent campus the school has always called home. This was made possible by the gifts IWP received from members of its Chancellor’s Council and all who contributed to the Silver Anniversary Campaign.