On November 12, 2016, The Institute of World Politics hosted the 9th annual Kosciuszko Chair Conference to tribute the memory of Zdzislaw R. Zakrzewski. The below summarizes the remarks given in each of the lectures counted as on-the-record. 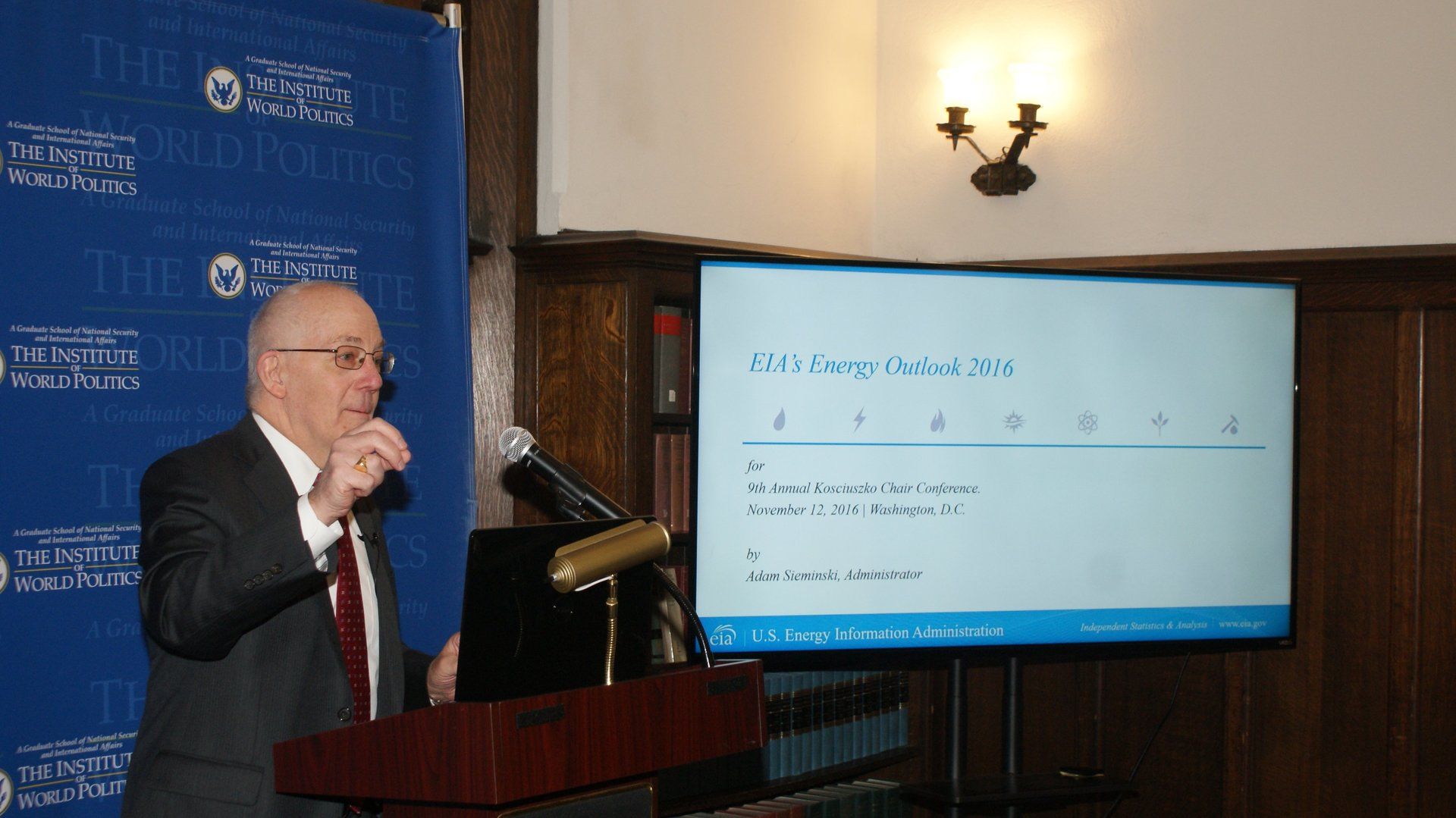 Adam Sieminski, administrator at U.S. Energy Information Administration, spoke about the international energy outlook of several regions of the West. Sieminksi used a comparative analysis between Poland and the United States to explain the energy situation.

He began his discussion with background information on the energy makeup of both countries. Currently, electricity in Poland heavily relies on coal whereas in the U.S. coal fuels only about 1/3 of total electricity due to its recent reliance on natural gas. However, the majority of Poland’s natural gas is imported from Russia at a very high price while coal is an important natural resource of Poland. That is why approximately 75% of Poland’s electricity is powered by it.

More than half of the world’s energy is going into industrial uses. It is correlated to income growth because when people have more funds at their disposal, they desire to buy items powered with electricity coming from gas or oil, such as cars, air conditioners, or electronic equipment. With this comes the issue of air quality and pollution and Sieminski stated that one of the first steps is decreasing coal production. The use of natural gas, hydropower, and other renewable sources of energy such as wind and sun, expands due to search for cleaner fuels.

Siemniski continued by discussing the need to deal with air pollution issues. He stated that currently there are regulations underway to extract heavy metals from the air once coal is burned in the United States. However, coal consumption to fuel energy is still an attractive oprton in Poland for two reasons related to the search for oil and natural gas. The geological problem, also known as below-ground, and the above-ground issue. The latter involves conditions of Polish contracts which prevent extremely high gains of energy companies.

To sum up, even though there is a global decrease on the use of coal to power energy needs, Poland continues to rely on coal due to difficulty in obtaining energy with other means.

Greed or Exasperation? The Reasons for the Latest Wave of Polish Emigration

Maria Juczewska, Associate Director for the Kościusko Chair of Polish Studies, spoke about the phenomenon of massive emigration among the youngest productive generation of Poles in the 21st century. She compared it to a time bomb, as the lack of contributions from the youngest generations is a threat to the stability of the pension system in Poland in the future.

Juczewska discussed first contradictory statements about present condition of Polish economy. Even though Poland is universally praised for its good performance under the economic crisis, job-related emigration continues. Ever since Poland joined the European Union in 2004, Poland continues to “export unemployment”, with as many as 1.8 million young Poles working abroad, in the richest countries of Europe.

To find out the reasons for the massivity of job-related migration, Juczewska analyzed Fraser Institute’s Economic Freedom of the World – Annual Report 2015 and a number of other reports on the condition of Polish economy and business transparency. In the report, she discovered that despite a fairly good value of the overall economic freedom index for Poland, a number of sub-indices referring to the extent of bureaucracy, corruption, independence of judicial institutions and rigidity of legal solutions has not improved or even deteriorated for the last 15-20 years.

Juczewska concluded her research with an appeal for transparency and fair analysis of the economic situation of Poland on the part of politicians, scholars and journalists. There is no use praising good performance of Polish economy if an ever increasing number of young Poles are leaving their country to seek their chances for promising careers and fair wages elsewhere.

On November 12, IWP student Piotr Trabinski discussed the development and current status of Russian cybernetics during the Zdzislaw R. Zakrzewski 9th Annual Kosciuszko Chair Conference hosted at The Institute of World Politics. He began his lecture with an explanation into the history of cybernetics and its Ancient Greek understanding as the art of governance. He then noted how it was largely forgotten until scholar Norbert Wiener revitalized its study in the 1940s. His description of cybernetics as accepted today is the “science of general regularities of control and information transmission process in different systems, such as machines, animals, and society.” It functions as an interdisciplinary science injunction with biology, sociology, semiotics, mathematics, and physiology, and cybernetics has paved the way to today’s technological advancements with computer science and cyber space.

Trabinski then discussed the relation between Russia and cybernetics. He explained how the Soviet Union initially rejected cybernetics because it did not align with the Communist Party values, and at the time there existed a symbiotic relationship between the government and science in which science was utilized as part of the anti-American propaganda campaign. Government officials directly rejected Wiener’s theories on cybernetics and referred to it as a “misanthropic escapade.” A point of contention occurred during this time as a colonel discovered Wiener’s work and how it could improve the development of military programs. He convinced his superiors of the necessity of cybernetics, and thus this science existed within the military programs. This persisting existence within the military aided Russia following the collapse of the Soviet Union as cybernetics thus survived, despite the general focus on the economy as opposed to the deterioration of its academia and science.

The restoration of cybernetics began shortly before Putin’s rise to power, and has since further developed amidst Putin’s strong support for it. The priority given to cybernetics has resulted in the present issue with Russian cyber attacks. In understanding the heritage surrounding cybernetics in Russia, such knowledge can be utilized to combat Russia’s cybernetic goals of catching up to the West, introducing the concept of digital sovereignty, controlling Russian society, and influencing the world through cyber espionage and cyber attacks. 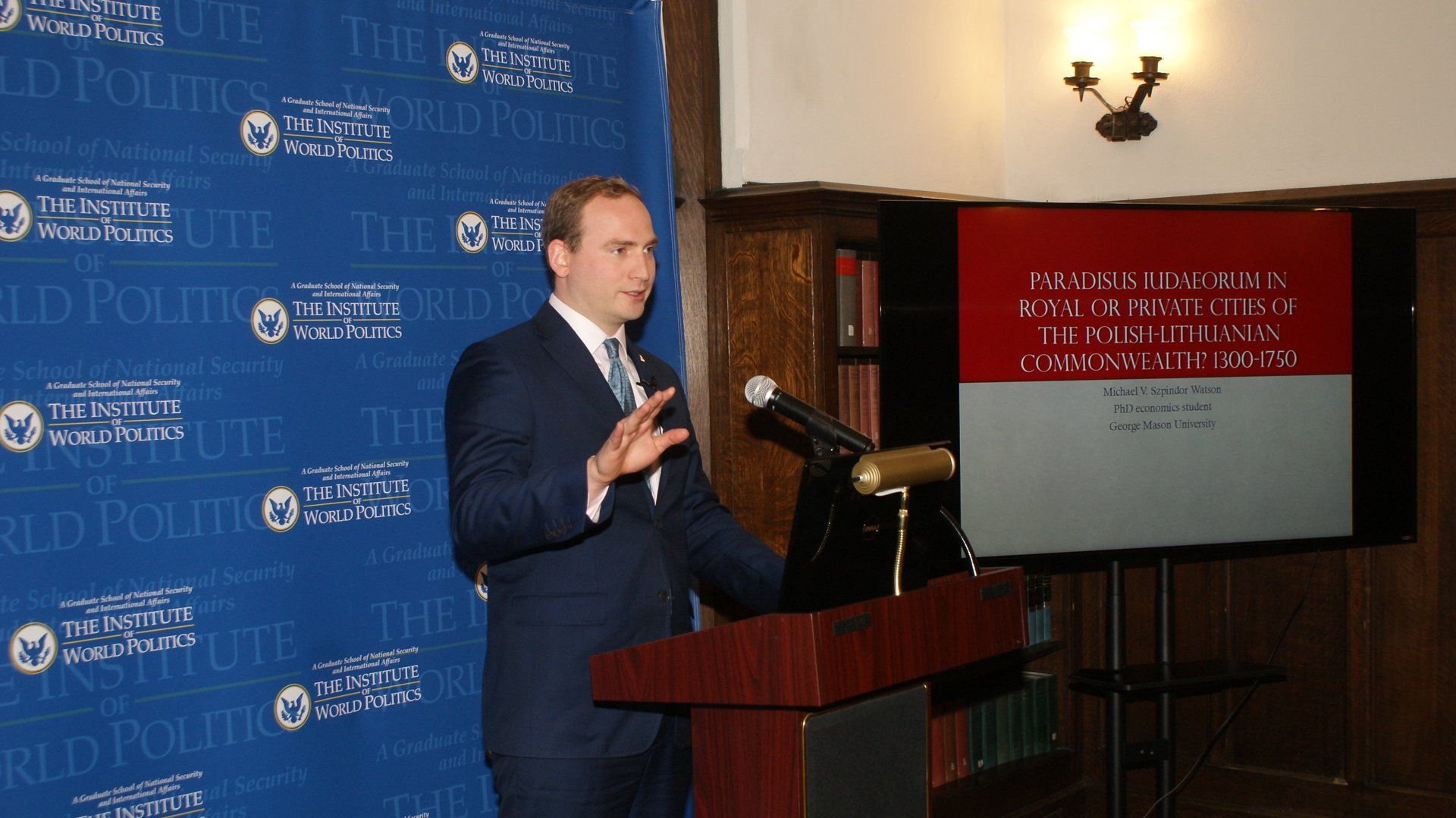 Michael V. Szpindor Watson, a doctoral candidate at George Mason University, compared in his lecture the treatment of Jews in private cities and royal cities in Poland between the 14th and 18th century. Using statistical analysis, Watson analyzed where peaceful coexistence predominated between Jews and their Christian neighbors in the Polish-Lithuanian Commonwealth by examining two variables: noble and private cities.

In 1264 the immigration of the Jewish community into Poland was secured through the Statute of Kalisz, whereby Jews became a separate estate with their own legal system and privileges in Poland. The privileges granted went against the tide of Jewish persecution in Western Europe and resulted in Poland becoming a “Paradise of the Jews.” The Polish-Lithuanian Commonwealth was a multi-ethnic, multi-religious, and multi-lingual monarchy that evolved into a Republic of Nobles. It guaranteed religious tolerance to the Jews, Eastern Orthodox, Muslims, Catholics, and Protestants.

Within the Commonwealth, Jews were allowed to hold and bear firearms. They established the Council of Four Lands which was an autonomous organization that paid taxes to the monarch, but excluded the Jews from paying within the royal towns and cities. This had bred jealousy and animosity among those who had to pay.

In the 18th century, half of the Jewish population lived within the Polish-Lithuanian region. Watson explained that they moved en masse to private towns because of the peace and prosperous living conditions as compared to royal towns. Private towns incorporated direct contact with landlords to quickly handle problems and Jews were more involved in the government. In every statistical test conducted Jews were much less likely to be persecuted or expelled in a private town.

Michael Szpindor Watson concluded by arguing that the evidence points to private cities as the better example of the Polish-Lithuanian tradition of religious toleration as compared to royal towns.

The videos of these lectures can be found here