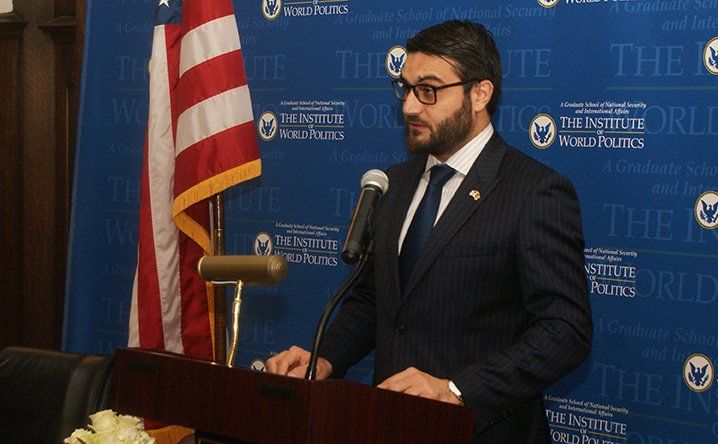 The Ambassador of Afghanistan, His Excellency Hamdullah Mohib, delivered remarks and answered students’ questions at IWP on Friday, March 31.

During his remarks, Ambassador Mohib discussed the critical partnership between Afghanistan and the U.S. in combatting international terrorism, as well as the role state actors play in supporting terror groups. Ambassador Mohib discussed the complex relationship between Afghanistan and Pakistan in the ongoing fight against the Taliban and affiliated groups.

The ambassador stated that the conflict in Afghanistan is not a domestic insurgency, but rather a war against state-sponsored terrorism and a global threat to open democratic society. According to the ambassador, the various small insurgencies taking place around the world “together make a perfect storm.”

Although these issues are inherited, Ambassador Mohib presented a hopeful message that with Afghanistan’s riches and resources there can be a brighter future for its people. He noted the continued need for support and dedication from the United States and allies to eradicate state-sponsored terrorism, saying: “We can rebuild, reform, and ultimately reach the peaceful and prosperous future of Afghanistan.”

Of the Ambassador’s remarks, Dr. John Lenczowski said: “The Ambassador delivered a powerful analysis of the geostrategic environment in Afghanistan and its neighborhood.”