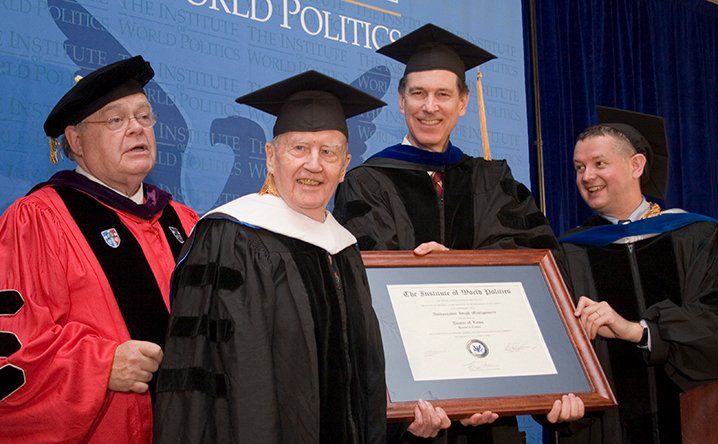 The other week, the United States lost a great patriot, and The Institute for World Politics lost a great honorary alumnus. Until his death, Hugh Montgomery was always ready to help IWP. In 2010, IWP awarded him its Honorary Doctorate of Laws honoris causa. In 2013, he participated in IWP’s celebration of former DCI William Casey’s 100th birthday. He was always there for us, to talk to students about intelligence, or as our ambassador to the CIA’s seventh floor. Personally, Hugh Montgomery served as Bernadette and my conduit to the Agency.

He will be missed by the thousands in the Intelligence Community who knew him, respected him, and worked with him.

Hugh Montgomery dropped out of Harvard in 1941 to join the war effort. During basic training, someone recognized that was not the average GI. He joined General William Donovan’s new Office of Strategic Services, the United States’ principal World War II intelligence service in the Eastern hemisphere. He remained in the Intelligence Community until his retirement in 2015 at the age of 90.

After WWII, he returned to Harvard, earning his Ph.D. in Romance Languages, and he joined the Harvard faculty. Shortly after his graduation from Harvard, Ambassador Montgomery returned to Washington and joined the newly formed CIA. 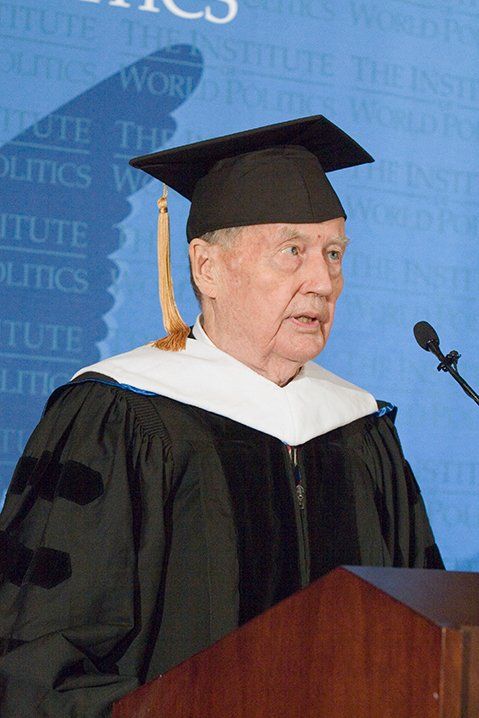 As an OSS agent during the Second World War, Ambassador Montgomery parachuted into Europe before D-Day. Leading a small group of U.S. military, he came upon a clearing with a “terrible stench.”  They had discovered the Buchenwald concentration camp. They found tens of thousands of concentration camp victims who lay on the ground unburied. Montgomery sought medical help for the few survivors. He left it to those survivors to deal with the remaining SS officers who had run the camp.

On another occasion, Amb. Montgomery and a group of GIs had been behind enemy lines for days. They were disheveled and tired. Upon meeting a U.S. armored advance force who were suspicious of this tattered band of men, he produced a pass signed by General Dwight D. Eisenhower authorizing him access to anywhere or anything — his “get out of jail card.”

Among his many exploits during his CIA career, he helped tap Soviet communications cables running underneath the city of Berlin. When stationed in Moscow, he served as the case officer for one of the most important CIA assets during the Cold War, Colonel Oleg Penkovsky. Among the vital information shared with the West by Penkovsky were the plans and descriptions of Soviet nuclear missile sites in Cuba. Thanks to this information, U.S. U-2 spy planes were able to photograph these missile sites.

Amb. Montgomery also served as the Director of the State Department’s Bureau of Intelligence and Research.

On several occasions, I encouraged Ambassador Montgomery to write his memoirs and offered to put him in touch with a New York Times bestselling writer. He declined, not because book writing was not his “thing,” but because he did not feel it would be appropriate for an intelligence officer to record his career. However, Ambassador Montgomery had lots of stories to tell.

Throughout his career, Ambassador Montgomery worked closely with his friend of six decades General Vernon Walters, another man with enormous talent for foreign languages — they would spend hours playing their version of trivia. Neither linguist was permitted to use the same language. Both were sufficiently fluent in eight languages to negotiate and in many more for purposes of casual conversation. Montgomery’s and Walter’s careers were parallel. When Gen. Walters served as United States Permanent Representative at the United Nations, Montgomery was his Alternate, assuming the rank of Ambassador; when Gen. Walters served as U.S. Ambassador to Germany, Amb. Montgomery became his deputy.

CIA Director Robert Gates appointed Ambassador Montgomery as the liaison between the CIA and foreign intelligence services represented in Washington. In this role, he came to know most of the senior intelligence officers in the world, as so many of them, at one time in their career, served as their country’s chief in Washington. Among his many contributions was his supervision of an eleven volume history of the CIA, which is still classified. Well into his 80s, Ambassador Montgomery supplied the last pair of eyes to review the President’s daily brief before it was sent to the White House.

Ambassador Montgomery served his country long beyond the time most officers in his position normally retire. America owes him a great debt of gratitude.

Owen T. Smith, Esq.
Chairman of the Board of Trustees, The Institute of World Politics 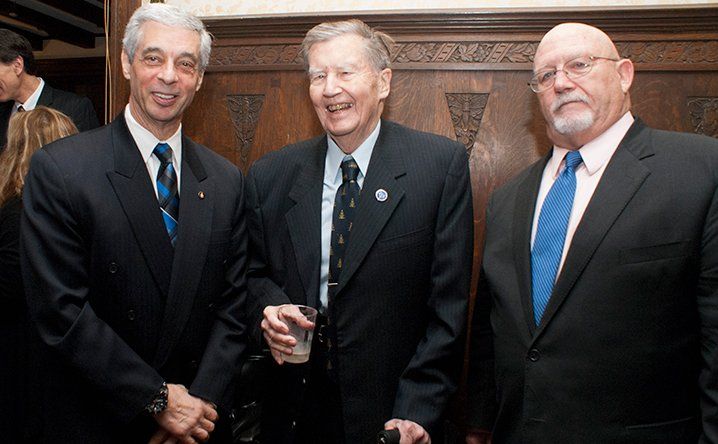