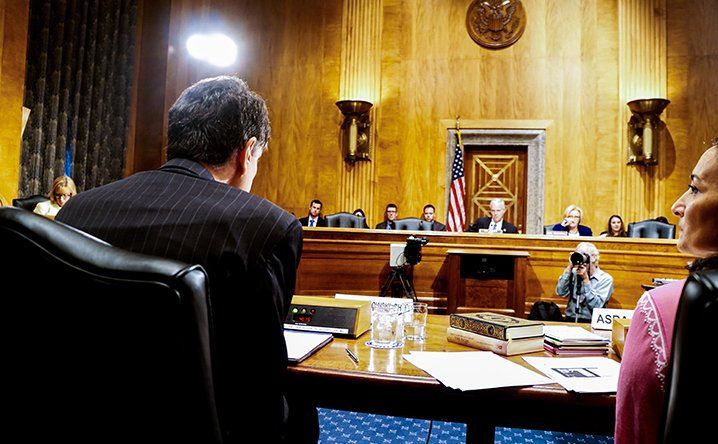 On June 14, 2017, Dr. John Lenczowski testified before the U.S. Senate Committee on Homeland Security and Governmental Affairs on the topics of countering terrorism and the threat of establishing an Islamist caliphate worldwide by confronting the underlying ideology. He also raised the concern about permitting sharia law to develop a parallel track in the United States — a law that is completely contrary to our Constitutional order and particularly to Western concepts of women’s rights. In his statement, he discussed the importance of combatting radical Islamism and made recommendations for the ways the government could be organized to best address what he calls the “war of ideas.”

The United States has been fighting the war on terror since 2001, and, while there has been moderate success in the past, recent events have shown that our nation needs a more effective way to address the growing threat of violent extremism. Wars against extreme movements necessitate the understanding of ideological factors — including the enemy’s inspiration, motivation, and justification for violence. If this growing threat is only met with hard power, a new movement can always arise from the ashes of its predecessors, and we will continue to fight the same war over and over again.

In his testimony, Dr. Lenczowski explained that “defeating this ideology requires an ideological counterattack based on superior moral precepts.” Central to this effort should be a strong focus on human rights as a positive alternative vision to that of Jihadism. Addressing the spread of the Jihadist movement’s extremist ideology could be done in a variety of ways, he noted, some of which involve an information campaign exposing the human rights violations (including slavery) of Islamist regimes, pointing out the Jihadists’ selective reading of the Koran, questioning the idea of Allah willing evil on others (including the killing of innocents), and exposing how the passion for political power overshadows the religious striving for holiness. He also noted that it is important to discredit the idea that the West is at war with the Islamic religion.

He stressed that there is a need for stronger U.S. organizations that specialize in public diplomacy, strategic influence, and ideological warfare to accomplish these goals. He suggested reestablishing a U.S. public diplomacy agency under the State Department with offices that highlight information policy, ideological affairs, and foreign opinion research, as well as strengthening the Department of Defense’s Military Information Support Operations.

The other speakers at the hearing were Ayaan Hirsi Ali of the AHA Foundation; Asra Nomani, an Indian-born American activist and co-founder of the Muslim Reform Movement; and former National Counterterrorism Center director Michael Leiter. The two women speakers — Ms. Hirsi Ali and Ms. Nomani — have both been the target of multiple death threats as a result of their opposition to extremism.

Full testimony can be downloaded here.

C-SPAN coverage of the event can be found here.