In December, IWP signed a Memorandum of Understanding (MoU) with Point Park University in Pittsburgh, Pennsylvania. This represents IWP’s third such agreement, following MoUs with Mercyhurst University and University of North Carolina at Chapel Hill.

The new partnership offers many benefits to Point Park students and alumni, including reserved placements in the IWP internship program as well as the opportunity to seek early admission as candidate for our MA programs. Most significantly, Point Park graduates who are admitted to IWP’s MA programs are guaranteed scholarships of $2,200 per semester, in addition to any merit-based scholarships already available to general applicants. This partnership scholarship only requires part-time enrollment, allowing each recipient to get a jump start on their professional careers.

To aid in the growth of our partnership, Point Park will advertise these opportunities to its students and alumni to ensure they are able to take full advantage. We will also create a number of opportunities for student group visits and visiting faculty lecture exchanges to ensure that our relationship is a substantive one. Point Park is key to the preparation of mature aspiring graduate students dedicated to serving a cause higher then themselves.

Above: IWP Director of Graduate Recruitment Tim Stebbins (center) with Michael Botta M.S., DSS, Department Chair of Criminal Justice and Intelligence Studies (left) and Gregory Rogers, J.D., Professor and Director of the Intelligence and Global Security Program at Point Park (right) at a ceremony in December to sign a Memorandum of Understanding between the Institute and Point Park.

The agreement was engineered by IWP Director of Graduate Recruitment Tim Stebbins and Gregory Rogers, J.D., Professor and Director of the Intelligence and Global Security Program at Point Park. It was signed at Point Park’s annual black tie event known as “The Gathering” on December 7th.  The Gathering is the annual ceremony for Point Park students who are being inducted into the OSS Society. This event was attended by several Central Intelligence Agency and Department of Defense alumni and included keynote speeches by former CIA Operations Officer Zachary Wyatt and by former Deputy Assistant Secretary of Defense for Intelligence Christopher Mellon.

Mr. Stebbins gave some remarks at the event, noting: “IWP and Point Park have a mutual commitment to the defense of the American way of life, and our efforts are greatly strengthened by our new partnership. This endeavor will streamline our central mission of educating the next generation of leadership in intelligence, diplomacy, and national security. We look very forward to welcoming Point Park alumni through our doors and watching them embark on fascinating careers.” 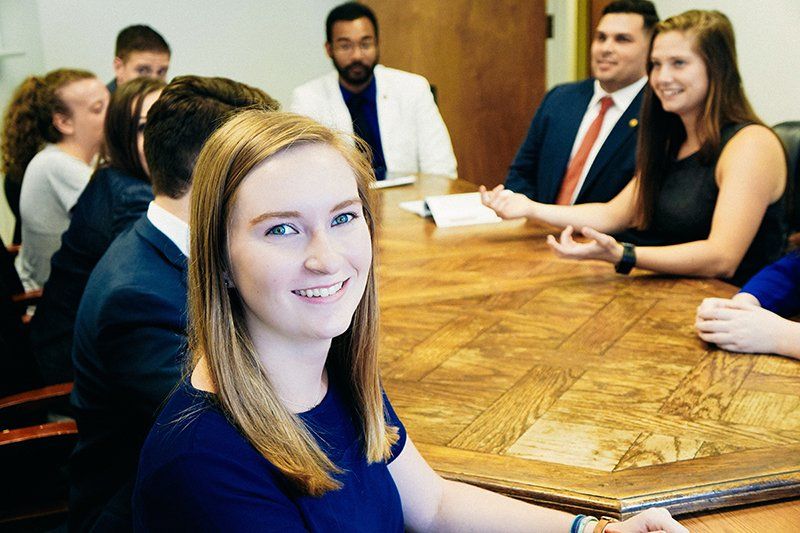 IWP has already worked with a few Point Park students, including Emily Hetz, who interned at the Institute during summer 2017. During her internship, Emily conducted research with Dr. David Thomas and took Dr. Marek Chodakiewicz’s course on Geography and Strategy. “We were given immense amounts of opportunities to learn about potential careers and speak to individuals in those professions,” said Emily of her experience. “It was an opportunity like no other.”

Of the partnership, Prof. Rogers commented:

“Over the years, I often have often told you that I believe that IWP is the Gold Standard for teaching national security, statecraft, and, most importantly for us, intelligence. I created the intelligence program at Point Park University in 2005 when I retired, and, since its inception, I wanted our students to go to IWP for their graduate education. Your faculty is not only good; they are the best. Your location is not only a great place; it is in the perfect place. How rare it is that the faculty has more than simply an academic appreciation of the subject matter. ‘Been there, Done that!’ could easily be your faculty motto. I personally am very happy that finally our two schools have a working relationship regarding the education of future intelligence officers, statesmen and an educated electorate.”