This summer, in cooperation with Ms. Lisa Donitz and the Alumni Association of the United States Merchant Marine Academy at Kings Point, New York, The Institute of World Politics hosted seven Midshipman interns, underscoring the burgeoning partnership between the two schools. This internship, designed specifically for the Kings Point Midshipmen, had its first participant in the fall of 2017.

During their time at IWP, the Midshipmen had the opportunity to participate in IWP classes, tour educational and historic locations in and around D.C., attend IWP events and external conferences, and receive private briefings with IWP instructors.

Midshipman Tanner Carter and Valerie Bowman, originally from Alabama and Ohio respectively, interned at IWP this summer from June 18th until July 5th, 2018.  Tanner currently plays defensive back on the Kings Point Football team, and Valerie participates in varsity cross country and track.

In addition to participating in classes at the Institute, they had lunch at the Army Navy Club in Washington, D.C., toured the International Spy Museum with Executive Vice President Larry Cosgriff, attended lectures IWP organized for Belgian Command and General Staff College students, including nearly 40 foreign officers, and toured the Gettysburg battlefield with IWP Senior Vice President for Professional Affiliations CAPT Chris Glass. They also met with Mr. Brian Lane of IWP’s Cyber Intelligence Initiative, who briefed them on civil maritime intelligence and security.  During their time at the Academy, they both have had the chance to travel around the world, visiting multiple countries in Europe, the Middle East, and East Asia. Tanner is also working on a four year long Senior Honors Thesis that focuses on relations between North Korea and the United States, and he was able to discuss his project with intelligence community experts and IWP professors.

Upon graduation from the Academy, they both plan to further their education in the field of foreign relations or intelligence while also sailing on with United States Coast Guard Licenses or pursuing a career as officers in the armed forces. 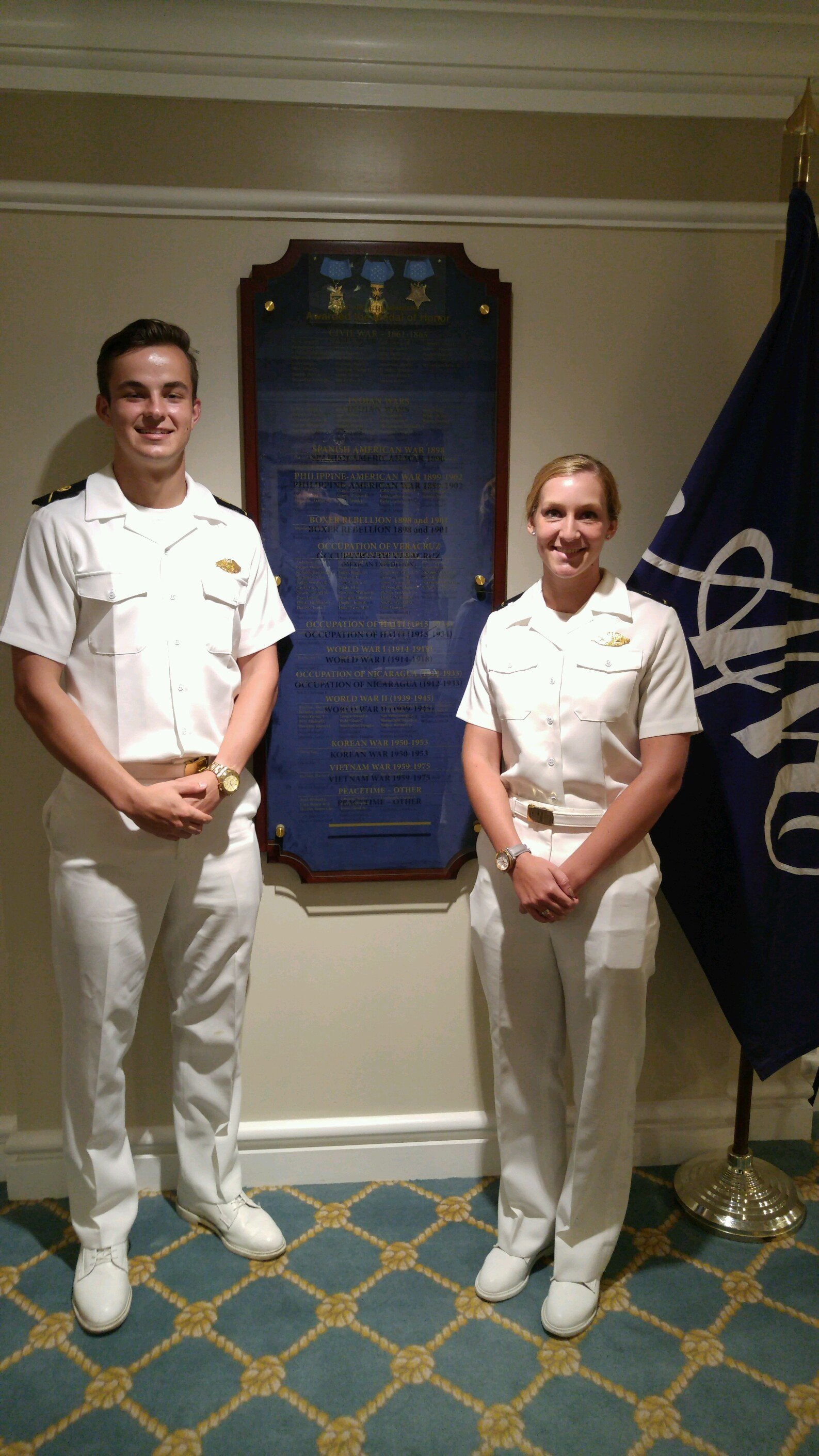 Above, from left to right: Midshipmen Carter and Bowman at the Army Navy Club, Washington, D.C.

Midshipman Robert Gaines arrived at IWP July 3, 2018 after spending four months aboard the USNS Arctic, a Navy support vessel in the Mediterranean. Robert experienced a diverse array of events and classes which exposed him to the world of intelligence work, and he was able to observe over a dozen of IWP’s graduate-level classes, tour Gettysburg, and attend U.S Army War College lectures with Professors/Colonels Darrell Driver and Fred Gellert, who presented an overview of the Army and its part in national security and statecraft with NATO and U.S. national security policy structure. He also participated in a National Maritime Intelligence Integration Office Maritime Cyber Security Conference and interacted one-on-one with veteran intelligence experts.

M/N Gaines is grateful for this incredible internship made possible by IWP and, as a result, is strongly considering pursuing a career in intelligence work following his graduation from Kings Point in 2020. 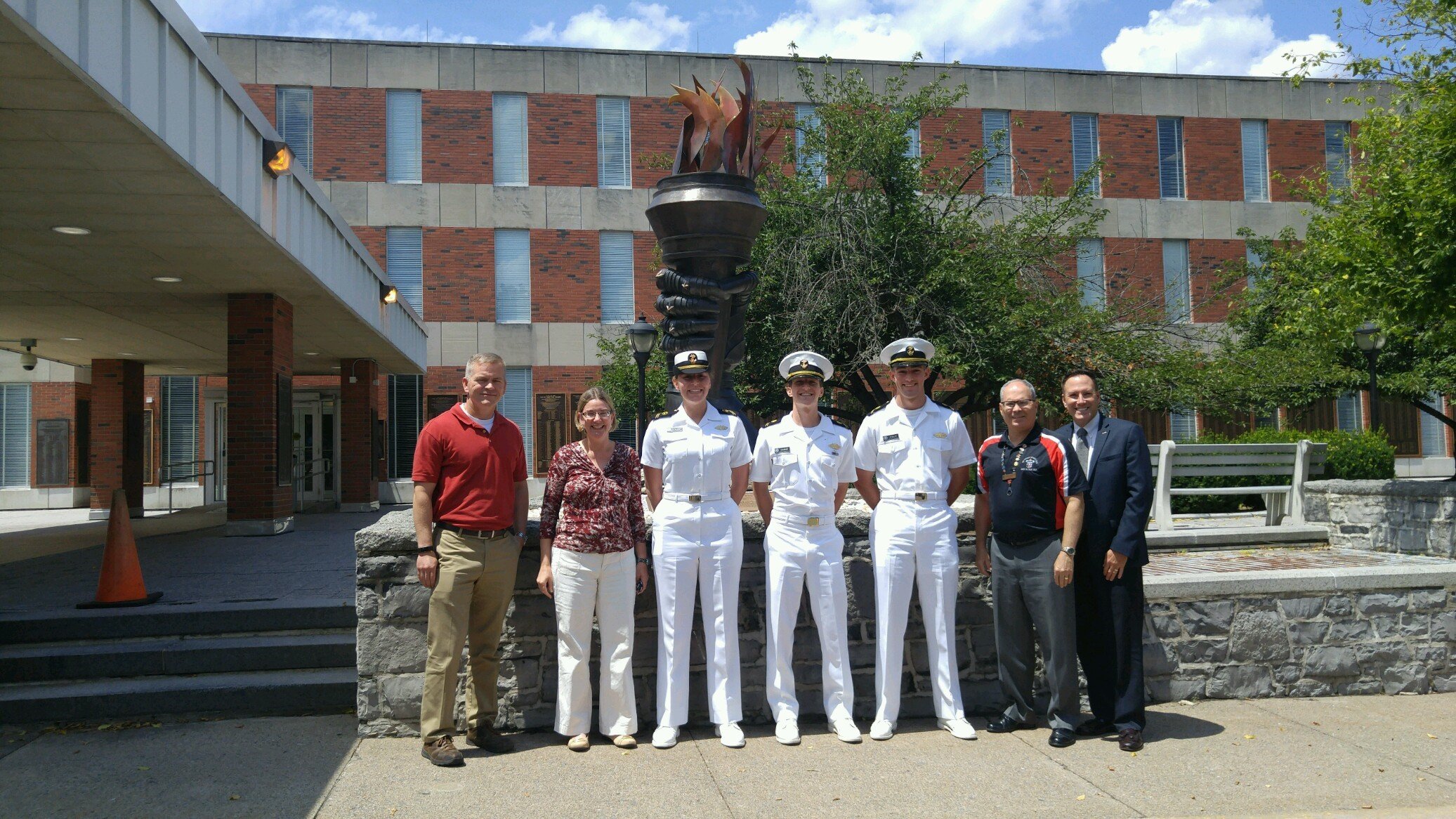 Midshipman Geoffrey Welch interned at IWP from July 16th until August 1st, 2018 after being aboard the MV Ocean Globe for four and a half months. The MV Ocean Globe is a heavy lift ship, sailing around the world with no set schedule. While Geoffrey was on board, the ship delivered food aid, furnace parts, and yachts.

During his time at the Institute, Geoffrey took part in classes, including Violent Non-State Actors in Today’s Security Environment, Comparative Intelligence Systems, and the Role and Importance of Human Intelligence. In addition to participating in classes at the Institute, Geoffrey and some of his fellow classmates, RJ Gaines and Meika Gathy, toured the Capitol Building, had lunch at the Army Navy Club in Washington, D.C., partook in a National Maritime Intelligence Integration Office Maritime Cyber Security conference, got a tour of the NSA, received a briefing at the U.S. Army War College, and went on a spectacular tour of Gettysburg by CAPT Chris Glass. He also met with Mr. Brian Lane, who briefed him and fellow classmates RJ Gaines, Ally McFadyen, and Will Quigley, on maritime security. Geoffrey thoroughly enjoyed his time at IWP and would like to return in the future. 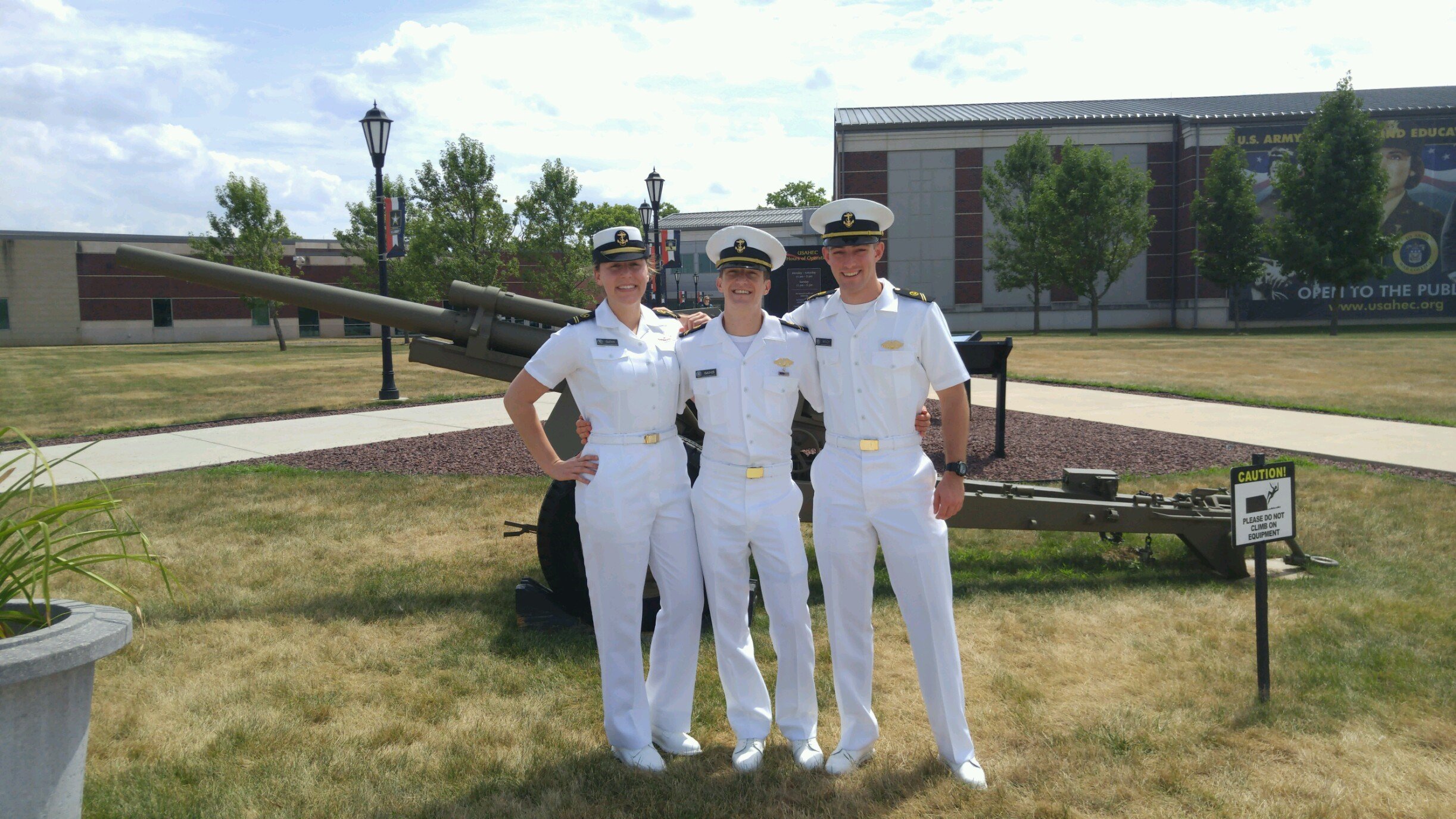 Above, from left to right: Midshipmen Gathy, Gaines and Welch at the U.S. Army Heritage Foundation, Carlisle, PA.

Midshipman Meika Gathy interned at IWP from July 9th until July 21st, 2018. She is working towards a Bachelor’s of Science degree in Marine Engineering, expecting to graduate in June of 2020. Meika is a member of the varsity swim team at Kings Point. She holds several school records and was a member of the first place 2017 and 2018 Skyline Championship Teams. During her 300 days of sea training, Meika worked alongside the ship’s Engineering Officers and visited Belgium, Germany, England, and many of the Hawaiian Islands and surrounding waters.

In addition to participating in classes at the Institute, Meika toured the Capitol Building, had lunch at the Army Navy Club in Washington, D.C., partook in a National Maritime Intelligence Integration Office Maritime Cyber Security conference, got a tour of the NSA, visited the Cryptology Museum, received a briefing at the U.S. Army War College, and toured the U.S Army Heritage Center and Gettysburg battlefield. She also met with Mr. Brian Lane, who briefed her and fellow classmates on maritime security.

Midshipman Ally McFadyen completed her internship at IWP between July 23rd and August 3rd, 2018. She pursued this internship opportunity to further her education in human intelligence and the role of different government intelligence agencies. After four months on the APL Thailand, a commercial container vessel operating in the Far East, she arrived in Washington, D.C. with a unique skill set specifically tailored for civil maritime intelligence.

The first day of the internship, she was greeted by fellow Midshipmen RJ Gaines and Geoffrey Welch for a tour of the Institute’s facilities and introduction to the faculty. Over the course of two weeks, she was able not only to visit classes, but also to experience the culture of Washington, D.C. During her time there, she visited several museums including: the Air and Space Museum, American History Museum, and the Museum of Natural History. Captain Chris Glass also gave her a thorough tour of Gettysburg with a detailed historical background on the Civil War.

MIDN McFadyen is very involved with the emergency medical services on the Merchant Marine Academy Campus and in the surrounding Great Neck, New York community. As an emergency medical technician, she visited the Uniformed Services University Medical School at the Naval Support Base in Bethesda, Maryland for a tour of their campus. Along with meeting several members of the IWP community, she personally sat down with Mr. Brian Lane to discuss a career in the civil maritime intelligence field. She is currently finishing a paper under the instruction of Captain Dean Lane on the increasing demand of cyber intelligence experts. On her last day, she attended a lunch at the Army Navy Club in Washington with Polish Military Officers and several officials from IWP to learn about the different military opportunities in allied countries and increase cultural awareness.

The next stop for MIDN McFadyen is a military sealift command ship off the east coast of the United States called the USNS Lewis and Clarke. This next sailing experience will involve replenishing active Navy ships while underway with fuel and ammunition.

She found that this experience gave the Midshipmen a taste of several different spheres of the intelligence community and allowed for them to reach out and network with many influential people. 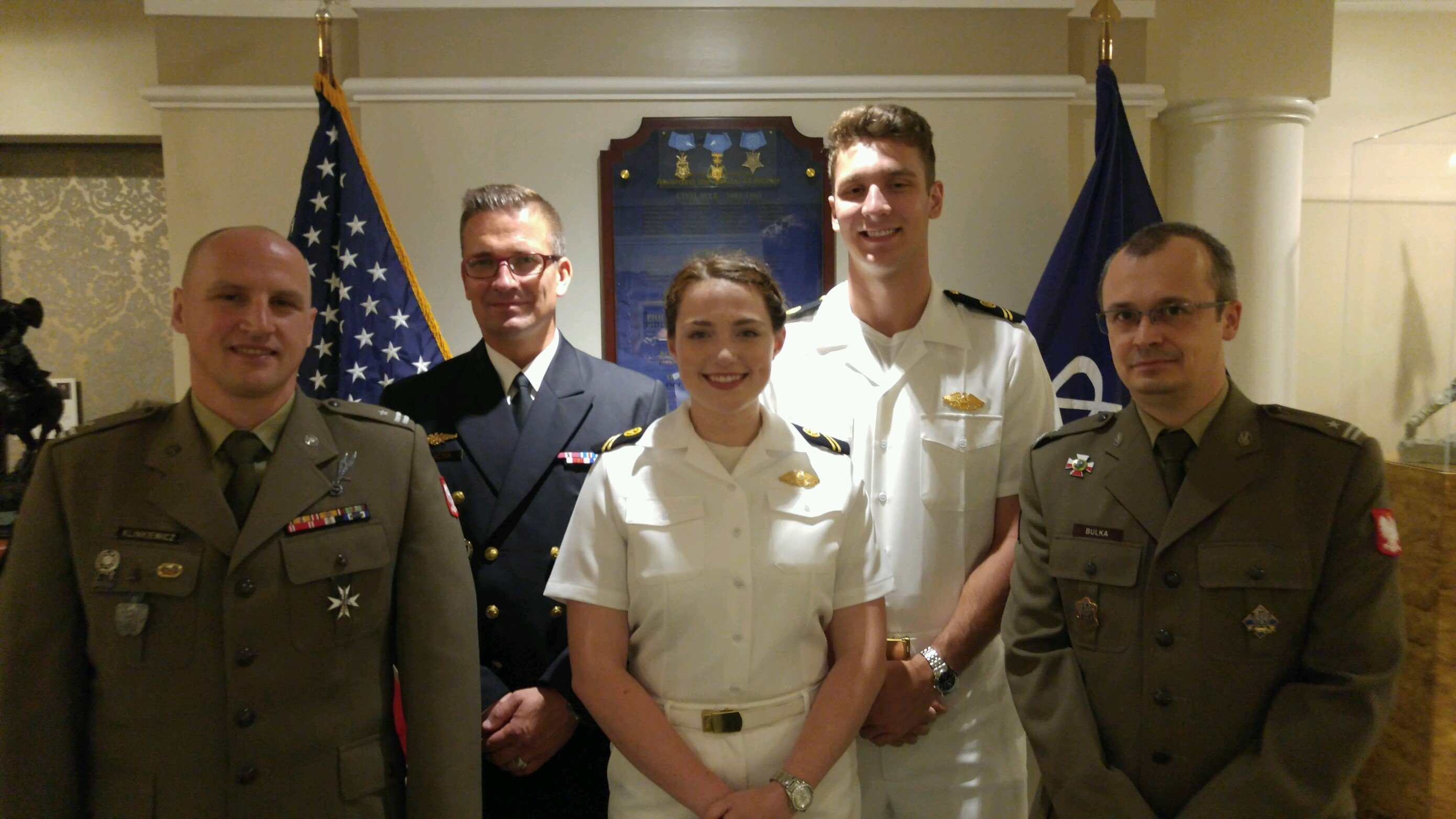 Above: Midshipmen McFadyen and Quigley with IWP Senior Polish Ministry of Defense Fellows at the Army Navy Club, Washington, D.C.

Midshipman Will Quigley came to his internship at IWP from July 23rd until August 3rd, 2018 after serving on the USNS Tippecanoe (T-AO 199) for four months. The USNS Tippecanoe is a Navy Oiler which provided service to the fleet by conducting underway replenishment operations throughout the Far East region.

While at IWP, MIDN Quigley participated in classes, including The Role and Importance of HUMINT, Comparative Intelligence Systems, and Violent Non-State Actors in Today’s Security Environment. He conversed with and learned about the Intelligence Community from Naval Intelligence Officers, CIA Operatives, and members of various other organizations. He is in the process of writing a cyber-intelligence research paper on the shortage of and increasing demand for cyber skills in the United States and in its foreign adversaries in coordination with Captain Dean Lane. In addition, MIDN Quigley visited the Museum of Natural History, the National Museum of American History, the National Air and Space Museum, and the Uniform Services University Medical School at Naval Support Activity Bethesda, and he experienced a tour of Gettysburg. He also attended lunch at the Army Navy Club with distinguished military officers from the United States and Polish Militaries.

Following his internship, MIDN Quigley joined the USNS Lewis and Clark (T-AKE 1) to conduct underway replenishment operations on the East Coast of the United States.