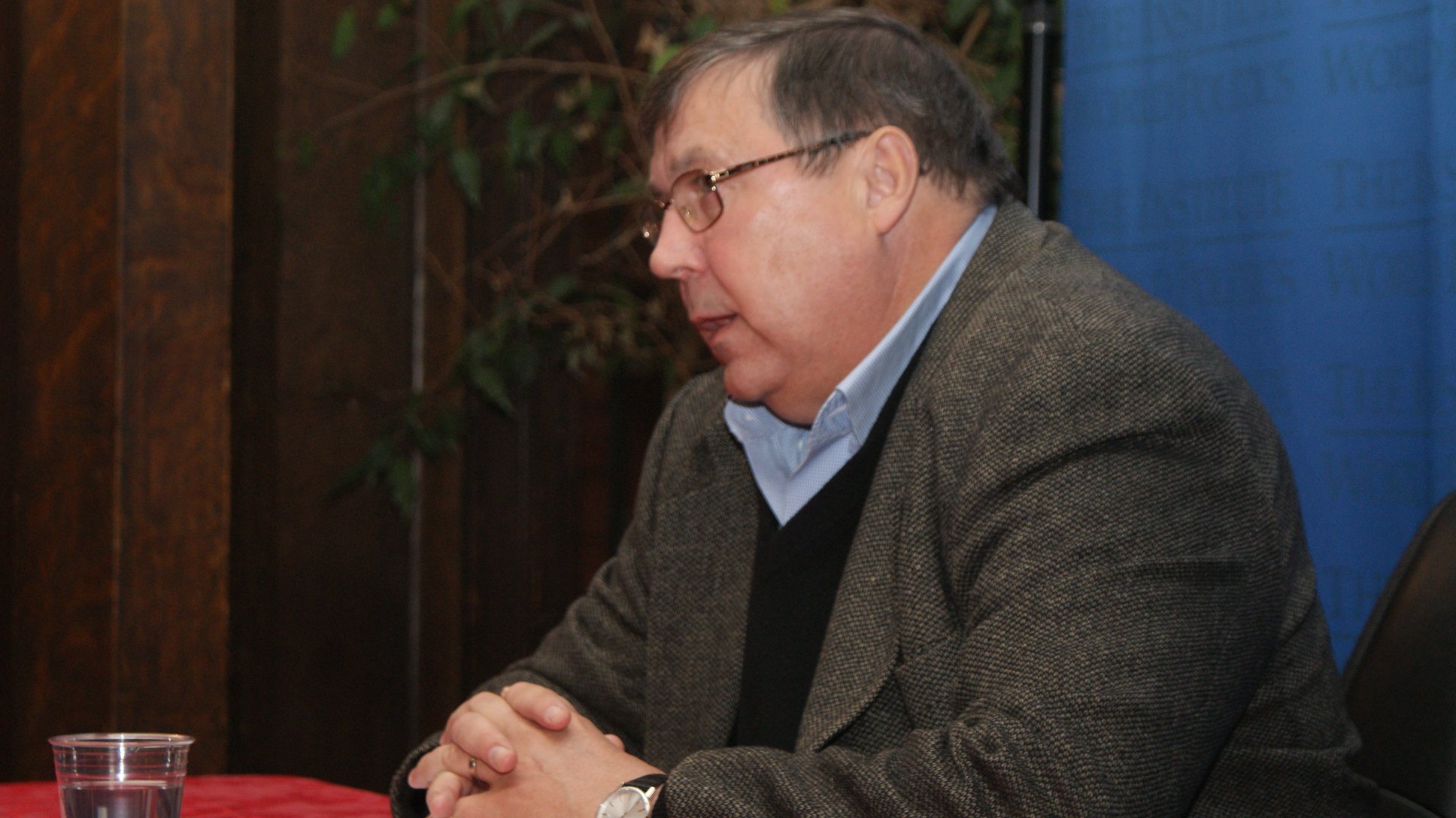 The Institute of World Politics notes with the greatest sorrow the sudden death of Dr. Robert, “Bob,” W. Stephan, a revered and popular former adjunct professor in the Strategic Intelligence Studies Program, on November 4, 2018, in Florida.

Before becoming a member of the IWP faculty, Bob had a long and distinguished career in U.S.  Intelligence at the height of the Cold War.  He joined the U.S. Air Force Security Service directly from high school as a Russian voice intercept specialist.  He earned his undergraduate degree from the University of Maryland during his military service, which included an assignment to the Berlin Field Station, or “Devil’s Mountain,” the legendary Cold War signals intelligence facility, in then West Berlin.

While at CIA, Bob completed a doctorate in modern Russian history at George Washington University.  His doctoral thesis, revised and published as Stalin’s Secret War: Soviet Counterintelligence against the Nazis 1941-1945 (2003), stands as the definitive English-language account of Soviet wartime counterintelligence and human deception operations on the Eastern Front. Please click here for a C-SPAN video of Dr. Stephan discussing this book.

After his time with the DIA and CIA, Dr. Stephan joined the Institute as a faculty member in 2009. He taught classes about the use of spies and subversion, terrorism, influence operations, and intelligence collection.

He is survived by his wife, Astrid Stephan, a former senior officer with the Office of the Director of National Intelligence and DIA.

IWP founder and president John Lenczowski comments: “Bob was one of the intelligence community’s most outstanding experts on the KGB and GRU and the creativity and ruthlessness of their methods. Studying under Dr. Stephan, IWP students received repeated jolts of the unpleasant and treacherous realities that comprised the strategic environment in which the United States has had to operate. He will be sorely missed.”

“My favorite quotation of his was ‘The Kenyan does not know how to hunt bear. So the Bear will hunt him,'” said IWP professor Dr. Marek Chodakiewicz.  “I already miss delving with Bob into the obscure and arcane of the Intermarium and Russia, a place we both agreed had the saddest history in the world.”

IWP honored Prof. Stephan’s memory with a lecture by Dr. Chodakiewicz on the topic of “Suki w Zakone: A Criminal Key to Putin’s Russia” on December 6.

Bob’s expertise, collegiality, sense of humor, and commitment to teaching and IWP students will be greatly missed.

Thank you to Dr. David Thomas for his contributions to this article.

“Bob was one of my most beloved professors. He is truly one of the gems of my time IWP, and I was greatly influenced by his generosity and knowledge. He was an amazing teacher and great friend. I truly miss him, both from the time he left the D.C. area and now that he has passed. Our talks over a cup of coffee or a beer about intelligence, counter intelligence, life, IWP, and his genuine interest in helping me navigate my way into a professional career are cherished memories.”

“I was devastated when Brian Kelley passed away in 2012… And now that Bob has also left us… it is incredibly sad. Bob and Brian were my favorite professors at IWP. Bob and Brian were both so young, so brilliant and experienced. I think they both thought I was a little nuts because of how much I loved to talk about Russian spies (timely even now). Bob was unceasingly patient with my questions, and it was obvious he loved his work — it was his passion. He certainly succeeded in transferring that passion to me.

“Wouldn’t you know it, I actually work for The U.S. Russia Foundation now. I’m sure that fact alone would make Bob and Brian laugh! But what they taught me has made me a better employee and a better advisor to my CEO. The Foundation makes grants for projects that support the Rule of Law, a rules-based market economy, and civil society in Russia. But I’m willing to bet that USRF’s notoriety in Moscow would make Bob shake his head…. with a chuckle of course ;).”

“Dr. Stephan was one of the kindest and most insightful mentors I had at IWP, and someone whose patient wisdom and joy in teaching every one of his students will miss dearly.”

“Dr. B was one of the professors that impacted me greatly during my time at IWP and after. Besides being a true expert in his field with a passion for teaching and learning, he was a fantastic conversationalist who really enjoyed listening to different points of views and topics. He was humble and genuine. He was a friend. I am grateful to have met him and have had the opportunity to learn from him. I am also grateful to his wife (whom he mentioned in his last letter to me), who supported the endeavors that allowed him to share his gifts with the world. I will remember to indulge in books as he did and will think of my friend each time I pick up a new one.”

“Dr. Stephan was a a great teacher and mentor during my time at IWP. Before I met him I told a friend I would be taking his course on Foreign Intelligence Systems. Her eyes lit up and she exclaimed: ‘I love him!.’ It was easy to see why; he cared about his students, he was very knowledgeable, and his experience was unparalleled in the academic world. I will remember him and the lessons he taught fondly. I still have my notes from the class he taught, and, as I review them now, I remember how much of an impact he has had on my thinking and professional development. My prayers for the loved ones he left behind, I know his influence for good will continue on!”

“Dr. Bob Stephan was a wonderful mentor. He was an insightful and kind man who was invested in the success of each and every one of his students. I’ll never forget how he was late to someone’s oral composition exam because he was giving me career advice.”

Selected Quotations from Class with Prof. Stephan
Courtesy of an IWP alumnus

“Look for how they think.”

“Usually, a country’s intelligence services are a direct reflection of that country’s character. Study one, and you’ll understand the other.”

“In counterintelligence, you’re looking for the keys to manipulation. I’m trying to get you to think offensively.”

“The biggest weakness of the United States is that we don’t have any patience.”

“Great affairs of state can turn on treason.”