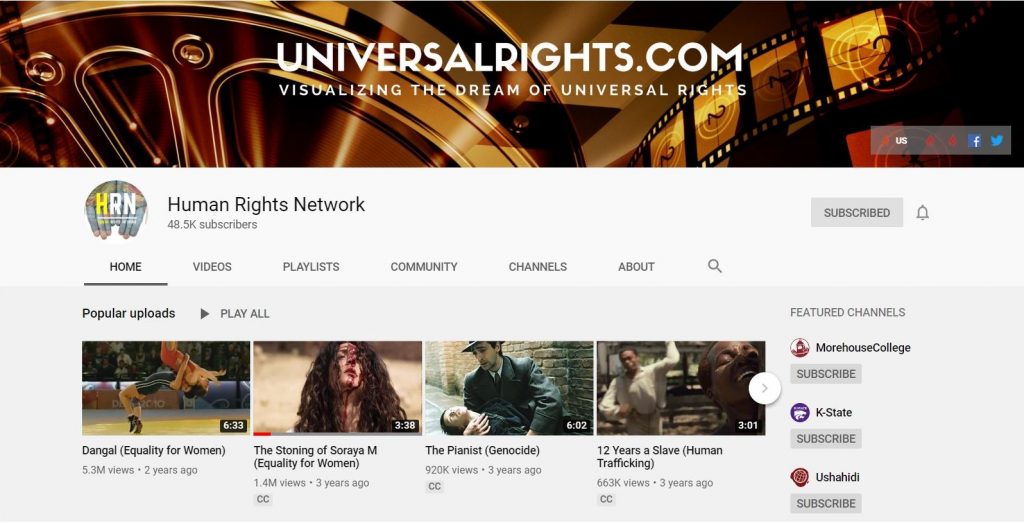 This human rights awareness campaign consists of YouTube videos that review popular movies and video games and highlight different human rights violations with real-world applications. These videos are posted on the Human Rights Network, a channel headed by Dr. Daniels. The Human Rights Network now has over 48,000 subscribers and hundreds of thousands — if not millions — of views on each video.

IWP students and interns have contributed videos to this project as a practicum exercise with IWP’s Center for Human Rights and International Affairs.

Effectiveness of the campaign

This month, the Horizon Digital Economy Research Institute has completed a preliminary analysis report that provides strong empirical validation of the educational benefits of the video content on the Human Rights Network. This is the first data that provides direct, independent confirmation of the effectiveness of the online public education methodology that Dr. Daniels has pioneered.

The research study, entitled “Telling Tales of Engagement: Raising Awareness of Human Rights Issues” and conducted by an interdisciplinary team of faculty from sociology, psychology, law, and several other disciplines, involved a collaboration between Cambridge, the University of Nottingham, several other major UK research universities, and the UK Engineering & Physical Sciences Research Council. The study was funded by a major grant from the UK Council for Research and Innovation (https://www.ukri.org/).

The study indicated that participants reported increased knowledge about and interest in human rights issues after watching the videos.

One of the videos used in the study was created by an IWP intern who used the Disney classic Pinocchio to teach about the scourge of child trafficking in our world.

The study indicated that participants reported increased knowledge about and interest in human rights issues after watching the videos. This increase declined slightly over the next week but remained higher than before. Participants also reported learning something new from each video that they watched.

The findings of the study strongly validate the value of our methodology for reaching the world’s first digital generation with the timeless truths of fundamental rights.

Of the study, Dr. Daniels comments: “The fact that a major research institution would commit significant research funds to study our work speaks to the global influence of our growing digital footprint online. Even more importantly, the findings of the study strongly validate the value of our methodology for reaching the world’s first digital generation with the timeless truths of fundamental rights.”

1/6/20 Update: The full study has been posted and is available here.