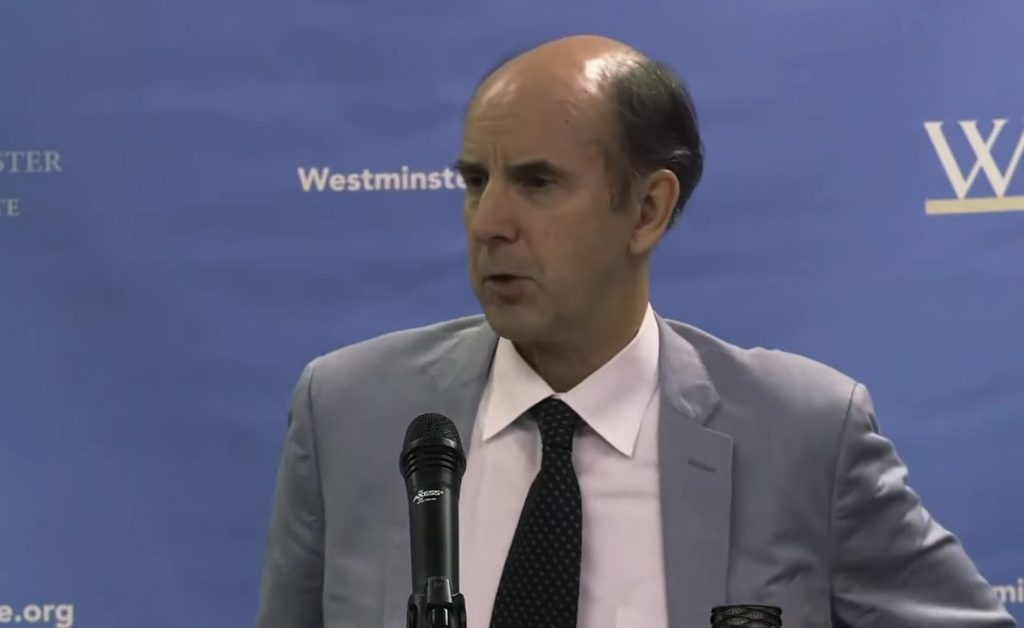 Dr. Christopher Harmon, terrorism expert and faculty member of The Institute of World Politics, gave a lecture at the Westminster Institute on November 26, 2019 about ways terrorist groups throughout history have met their ends and the implications for the current War on Terror. Dr. Harmon explained that terrorist groups have typically ended through five means:

Dr. Harmon argued that though ISIS’s ideology will continue to inspire terror attacks in the future, the death of ISIS’s so-called caliph strikes a significant blow to the organization.

Dr. Christopher Harmon is the Donald Bren Chair of Great Power Competition at Marine Corps University. He has given lectures at the National Counter-Terrorism Center and the Interpol headquarters and has authored or edited six books on counter-terrorism. He has also published in Combating Terrorism Exchange, Orbis, and Oxford Bibliographies. Dr. Harmon teaches courses at IWP on terrorist advocacy and propaganda and military strategy.

In his lecture at the Westminster Institute, Dr. Harmon gave a historical overview of the five ways that terror groups end. First, he explained, terror groups can end through the government’s use of force. “I’ve read so many times that force can’t defeat terrorism, and there are cases where that’s simply flat wrong,” Dr. Harmon explained. He cited the special operations in the 1970s against the South Moluccan separatists in the Netherlands and the MRTA in Peru as prime examples of force being used to eradicate a terror group.

Decapitation, the second method of ending a terror group, is popular among government leaders because of its simplicity but mixed in terms of success rate, Dr. Harmon argued. While removing Emilio Aguinaldo in the Philippines successfully dismantled his insurgency, the same tactic failed to destroy the National Liberation Front in Algeria, the Kurdish Workers Party in Iraq, or the Shining Path terror group in Peru.

A third way to end terror groups is by implementing a grand strategy: “something larger than the martial, something in which all of the parts have a place, a way to harness all elements of national power,” explained Dr. Harmon. Though difficult to develop and implement, a grand strategy has the potential to tackle terrorism effectively. Dr. Harmon walked through the U.S. government’s strategy of identifying, tracking, and arresting anarchist terrorists in the late nineteenth and early twentieth centuries as an example of grand strategy at work. He also pointed to the more recent progress against Basque terrorism for a successful, multi-pronged strategy including cooperation with France, thorough policing, and granting limited autonomy to the region.

Fourthly, terror groups sometimes end through a transition to pacific politics. Dr. Harmon pointed out that some terrorist organizations try and fail to enter mainstream politics, while others would never contemplate this option. Some successful cases, though, include the Maoists in Nepal, the IRA in Northern Ireland, and the Basques in Spain.

The last way terror groups end is also the bleakest: sometimes terror groups only cease terror attacks when they have won their fight. Dr. Harmon included in this category groups that may not have gained complete victory, but have limited strategic gains, meaning that they have “cut out enough of a country or a government such that they are demonstrably powerful.” Dr. Harmon posited that Hezbollah, the Taliban, the PLO, the Bolsheviks, the Algerian FLN, and the Khmer Rouge fit this label.

In the current fight against ISIS, Dr. Harmon argued that the recent death of Al-Baghdadi—an example of decapitation—could be a mortal blow against the terror group. While acknowledging that the ideology of ISIS could survive beyond Al-Baghdadi, especially as the group gathers strength in the Philippines and Africa, Dr. Harmon contended that ISIS derived much of its power from its claims to be a real caliphate. Removing the so-called caliph, then, could be an important step in ending ISIS.

At IWP, recent speakers have also addressed counter-terrorism and the success (or lack thereof) of current U.S. strategies against ISIS and other terrorist groups. For example, Dr. Joshua Tallis recently gave a lecture about his new book that addressed terrorism at sea and other maritime criminal activity, arguing that increased militarization was not the right approach to this threat. In September 2019, Lieutenant General Michael Nagata (ret.) argued in his lecture at IWP that while the U.S. had made progress in its counter-terrorism efforts, it was failing to identify groups vulnerable to radicalization.