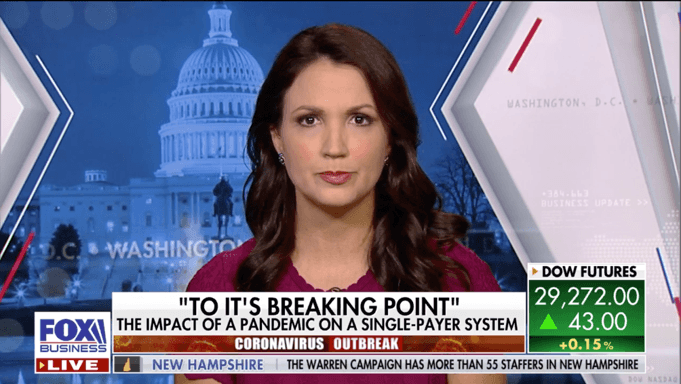 This past week, Professor Rebeccah Heinrichs gave remarks on Fox Business about how the Communist Party of China (CPC) was responsible for the initial outbreak of the coronavirus and how many statistics revolving around the virus have been under-reported.

During the segment, Prof. Heinrichs stated that the general population has the right to know about the current situation and the outbreak of the coronavirus, as their concerns about the virus and government are justified. Additionally, there is a lack of accountability from the government, and this is a hallmark of a communist-run government, where true values lie in the loyalty to the party rather than competency. Rather than fix these issues, Chinese officials have neglected the matter and, so to speak, “swept it away under the rug.” Furthermore, because of having neglected the coronavirus, China is now overwhelmed, and the methods to deal with the current situation are not working.

She commented: “No, they [China] need to allow for Western doctors to come in to offer help and assistance, and they need to be transparent. There needs to be concern about how this virus is spreading, more about how it’s spreading, the source of its origin. Even if this is an embarrassment to the Chinese government. If you care about the flourishing and your people, you must admit mistakes and errors, otherwise, you will cause resentment from the Chinese people.”

Rebeccah Heinrichs is a senior fellow at the Hudson Institute, as well an adjunct faculty member and teaches a course on Nuclear Deterrence and Arms Control at IWP (IWP 684). Professor Heinrichs’s research focuses on a wide spectrum of national security issues, specifically counter-proliferation, missile defense, and nuclear deterrence. Professor Heinrichs aided in the initiation of the bi-partisan Missile Defense Caucus and has served as an advisor on national security and foreign policy to Representative Trent Franks, a member of the House Armed Services Committee.