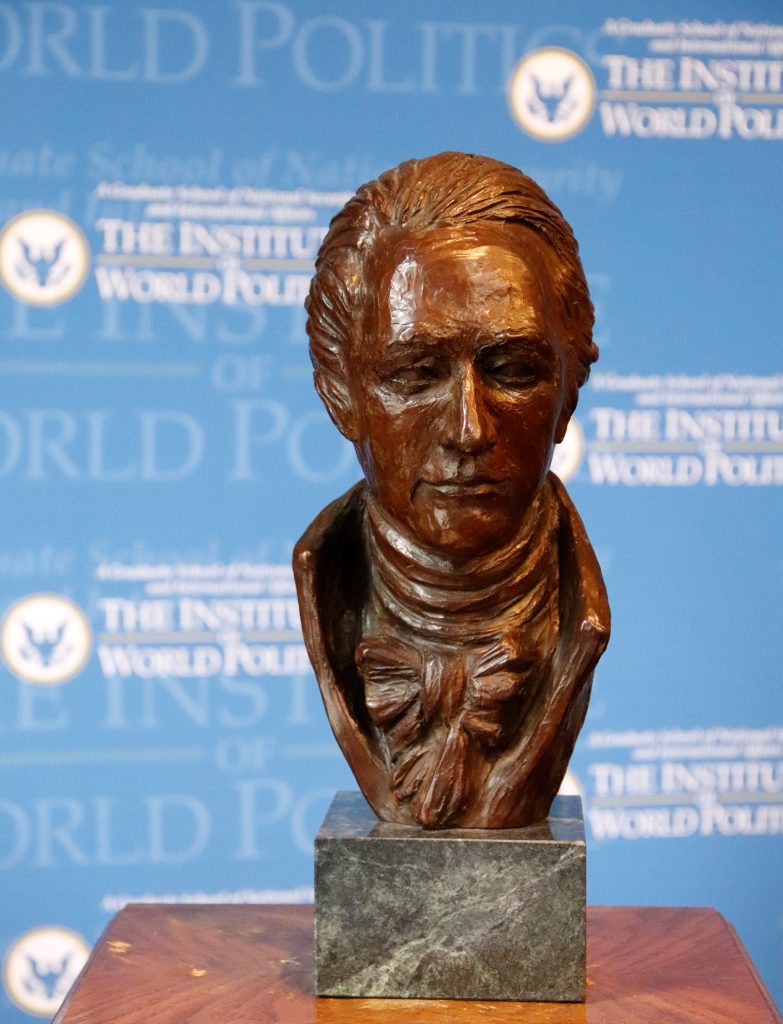 Mary Ann Novak recently donated a bust of Alexander Hamilton, the first Secretary of the Treasury, to The Institute of World Politics.

This bust was created by Karen Laub-Novak, an established, well-known, and widely recognized artist and the wife of Michael Novak. Mr. Novak was an influential author, philosopher, theologian, and analyst of society and foreign affairs who was one of IWP’s first four professors. He lent his name and the prestige of his reputation to the fledgling Institute, even before the school became accredited. He was the first to teach IWP’s course on Ideas and Values in International Politics, which he later co-taught with Prof. Joshua Muravchik. When he was no longer able to teach at IWP, he continued to guest lecture in this course.

Mr. Novak was a member of the board of International Broadcasting, which managed Radio Free Europe/Radio Liberty. He was the author of some very influential works, that, among other things, had a profound influence on Pope John Paul II when he was writing his famous encyclical Centesimus Annus, which covered political and economic issues. Among his other influential writings are two other books: The Spirit of Democratic Capitalism and On Two Wings: Humble Faith and Common Sense at the American Founding. He won the Templeton Prize for Progress in Religion.

Both Karen and Michael Novak were devoted to American founding principles and to our Founders. They were directly involved at Mount Vernon, and Michael Novak also co-authored a book on George Washington with his daughter Jana Novak.  It was therefore fitting that Mrs. Novak chose to honor Alexander Hamilton, who was so integral to our free market and banking system, through the creation of this statue.

The original sculpture was dedicated at the Treasury Department some time ago. The Alexander Hamilton Society also purchased a copy of this bust. Another of these busts went to Ron Chernow, author of the biography of Alexander Hamilton that inspired the popular Broadway musical.

Other notable works by Karen Laub-Novak include a statue of 1970 Nobel Peace Prize Winner Norman E. Borlaug, the design of a bronze medallion for the Becket Fund, and an official portrait of the director of the OMB for the Eisenhower Executive Office Building.

Of the bust, Dr. Joseph Wood commented: “This statue will be a superb reminder of the importance of Hamilton as a Founder, and of all the Founders whose thinking is at the core of IWP’s ethos, as well of Michael’s involvement with IWP in the early years of our institution.”