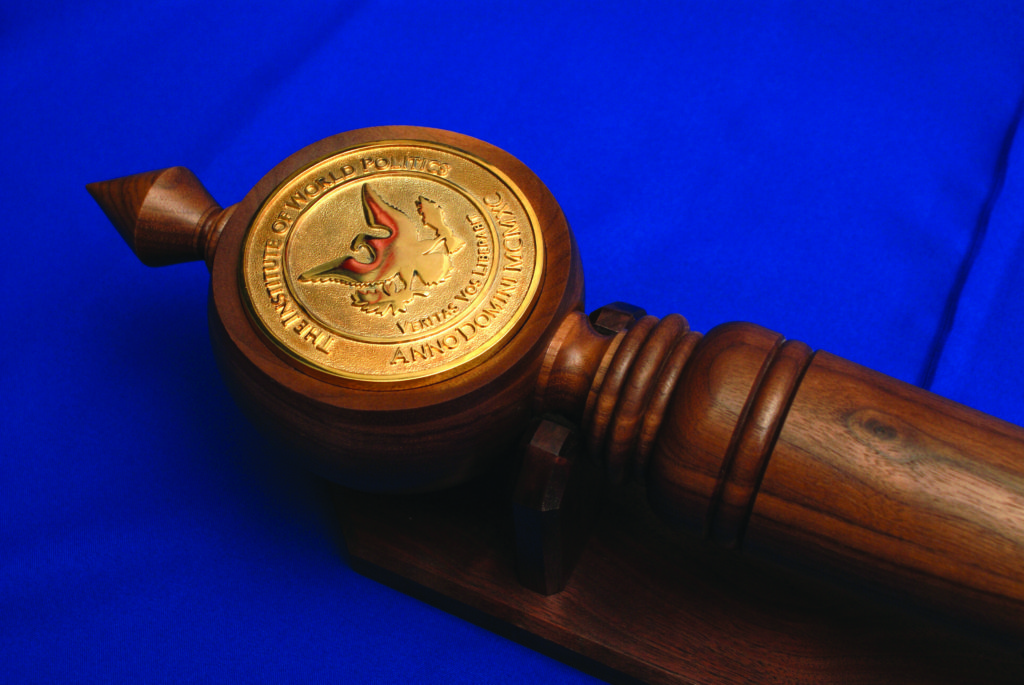 IWP has launched a search process for a new President to build on the Institute’s success in educating the next generation of leaders in national security, intelligence, and international affairs. IWP Board Chairman John Lovewell and longtime trustee Ambassador Aldona Woś are co-chairing the Search Committee, which is actively seeking qualified candidates dedicated to the mission of the Institute.

Additional information about this exciting opportunity and how to apply may be found below.

About The Institute of World Politics

The Institute of World Politics (IWP) is a premier graduate school for national security, international affairs, and statecraft. The school’s mission is to develop leaders for the diplomatic, military, security, intelligence, and international affairs communities, through professional education in the ethical conduct and strategic integration of all the instruments of national power.  The curriculum emphasizes both the traditional instruments as well as neglected arts such as: counterintelligence, counterpropaganda, economic statecraft, information operations, political warfare, and public diplomacy.  The strategic integration of all these instruments can increase the probability of “winning without war.”

The curriculum is based on a foundational course of study in American founding principles and Western, Judeo-Christian moral philosophy and applied ethics.  This, combined with IWP’s faculty of scholar-practitioners who serve as role models, provides the basis for the school’s ethos of public service, prudential strategic reasoning, and moral leadership.

IWP was founded in 1990 by Dr. John Lenczowski, the former Director of European and Soviet Affairs at the United States National Security Council during the Reagan administration.  The school is located in the Dupont Circle neighborhood of Washington, D.C.  It currently offers five master’s degrees in various aspects of national security and international affairs, the nation’s first professional doctorate degree in national security, and 17 graduate certificate programs.

IWP is a non-profit, independent, tax-exempt educational institution that relies solely on private charitable donations and tuition. It currently serves approximately 140 students and 1300 alumni.  Many alumni are now serving in some of the country’s most sensitive and critical national security leadership roles.  The students have come from across the U.S. and from 60 countries around the world.  The student body has been comprised of both recent college graduates as well as mid-career professionals from most departments of the U.S. Government, including most agencies within the U.S. intelligence community, every branch of the U.S. armed forces, defense and intelligence contractors, Congressional staffs, and other relevant non-governmental organizations.

The Institute is actively recruiting a new President who will understand, embrace, and live the vital mission of the school.  The President will accept the challenge to lead an exceptional institution, expand its fund-raising capabilities, increase its endowment, grow student enrollment, enhance the curriculum, explore entrepreneurial opportunities, and ensure the Institute continues its mission in service to our nation.

The immediate challenges facing the new President will be to expand fundraising, grow the endowment, and to build enrollment – all to support current operations and establish a secure financial foundation for the long term.

The new President will be the officer principally in charge of expanding the Institute’s fundraising capability and growing the endowment.  The President will be responsible for developing and maintaining relationships with current supporters and seeking and cultivating new relationships with potential donors, foundations, and corporations. The President will work closely with the Vice President of Institutional Advancement, as well as Dr. Lenczowski, on these tasks.  The Institute will also require the President to lead a campaign to secure endowment funds sufficient for the long-term sustenance of the school.

The Institute’s Strategic Plan calls for increasing the student body. Building enrollment will provide financial support and allow the school to achieve its strategic curriculum goals. The school is already working energetically to implement a range of student recruitment initiatives, including partnerships with undergraduate schools and other institutions, social media marketing, and a robust distance learning program.

The President will represent and promote the Institute in a wide variety of public forums for the purpose of fund-raising, student recruitment, job placement for both students and graduates, entrepreneurial opportunity development, promoting the IWP brand, and extending the influence of the Institute.

This position provides a unique career opportunity as well as the chance to serve a noble cause.  At a time when the nation faces a range of pressing threats, both foreign and domestic, the need for patriotic, principled, selfless, prudent, and well-educated national security leadership has never been greater. The Institute’s comprehensive and unique curriculum has made it a critical resource for preparing our nation’s national security professionals.  No other U.S. institution offers all of the curriculum components described above, or better prepares its future leaders to defend America’s liberty, security, peace, and prosperity.

An understanding of the academic domain, including the culture of academic institutions, the expectations of faculty members, the needs of students, and academic trends that affect the ability of many colleges and universities to provide the education needed for future leaders in American public life.

Qualified applicants should submit their resume along with a cover letter, 3 professional references, and leadership philosophy statement to Michelle Ray at mray@blackwellhr.com.

IWP IS AN EQUAL OPPORTUNITY EMPLOYER and is opposed to discrimination on any grounds. It is our policy to consider qualified applicants for employment without regard to race, religion, color, national origin, ancestry, age, sex, gender identity, gender expression, sexual orientation, genetic information, medical condition, disability, marital status or protected veteran status.