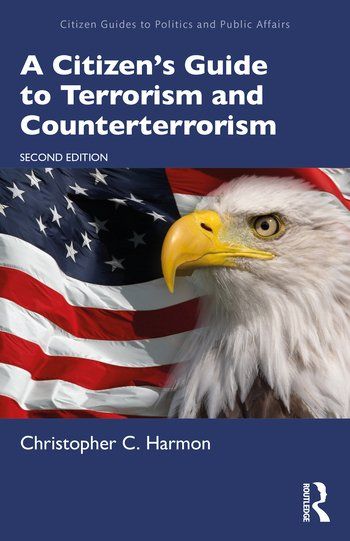 Written for the thinking citizen and advanced student, this succinct and up-to-date book takes a “grand strategy” approach toward countering terrorism. It employs examples and issues drawn from present-day perpetrators and actors, following the physical eradication of the ISIS proto-state.

Christopher C. Harmon is a veteran academic in areas of military theory, strategy, and terrorism studies, with a career in instructing U.S. and foreign military officers and American graduate students. At IWP, he teaches courses on Terrorist Advocacy and Propaganda and Military Strategy: Theory and Practice.

His second edition is organized into three sections. Harmon introduces the problem of America’s continued vulnerability to terrorist attack by reviewing the long line of recent attacks and attempts against the U.S., especially in New York City.  Foreign-based and home-grown terror are both addressed.  Part II examines the components of our grand strategy—the varied ways in which the U.S. is already fighting terrorism, highlighting the labors of diverse experts, government offices, intelligence and military personnel, and foreign allies. The book outlines problems and achievements in intelligence, diplomacy, public diplomacy, economic counterterrorism, law and law-making, and the use of force. Part III concerns the future and sketches the prospects for further action. The text steers clear of partisanship and instead lists recommendations with pros and cons.  It includes factual stories of how individual citizens have made a difference in the national effort against terrorism. The Citizen’s Guide ends in discussing ways that many terrorist groups have been defeated, a summary of scholarly work Dr. Harmon began in 2003 here at IWP, and in lectures at Sandhurst, Quantico (Marine Corps University), Capitol Hill in Washington, etc.

This book will contribute to our understanding of the problems surrounding terrorism and counterterrorism–and the approaches the United States may take to meet them.

Below is the lecture that Dr. Harmon gave about this book in 2014, shortly after the first edition was released: