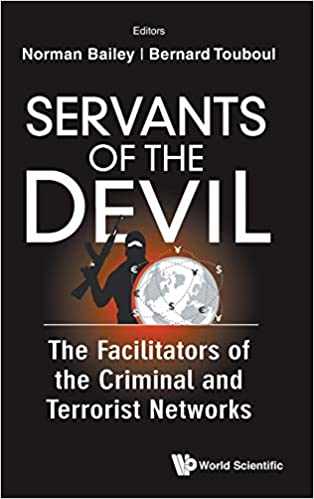 IWP professor Dr. Norman Bailey’s new book, Servants of the Devil: The Facilitators of the Criminal and Terrorist Networks, will be released this month. This book, which was edited by Dr. Bailey and Bernard Touboul, serves to warn high-ranking officials – security authorities, government officials, businesses, and financial leaders – that terrorist and criminal networks have gained legitimacy and power due to help willingly given to them from structures of the contemporary world.

After the fall of the Soviet Union and the loss of faith in the communist agenda, liberal capitalism spread across the world without any true ideological rival. Driven by the desire for returns on investments and widening profit margins, capitalism has provided political, economic, and social actors with opportunities to achieve these desires – though sometimes at the cost of extensively and willingly cooperating with facilitators of terrorism and crimes.

Dr. Bailey’s book recommends changes in the contemporary legal and intelligence structures that would allow law enforcement to remain one step ahead of terrorists and criminals – two non-mutually exclusive groups whose tactics and techniques constantly change. Facilitators of terrorism and crime, according to the book, ought to be named, shamed, and prosecuted in order to disable the networks within which they operate.

This issue further calls for reconstructing the economic paradigm. A new paradigm ought to emphasize and demonstrate a true economic understanding of countries, their economies, and the actors that play a part in the countries’ economies. Doing this, according to Dr. Bailey, will provide leaders with an understanding of the actual strength and role of criminal and terrorist activities in local, regional, and international governance.

Click here to purchase Servants of the Devil: The Facilitators of the Criminal and Terrorist Networks from Amazon.