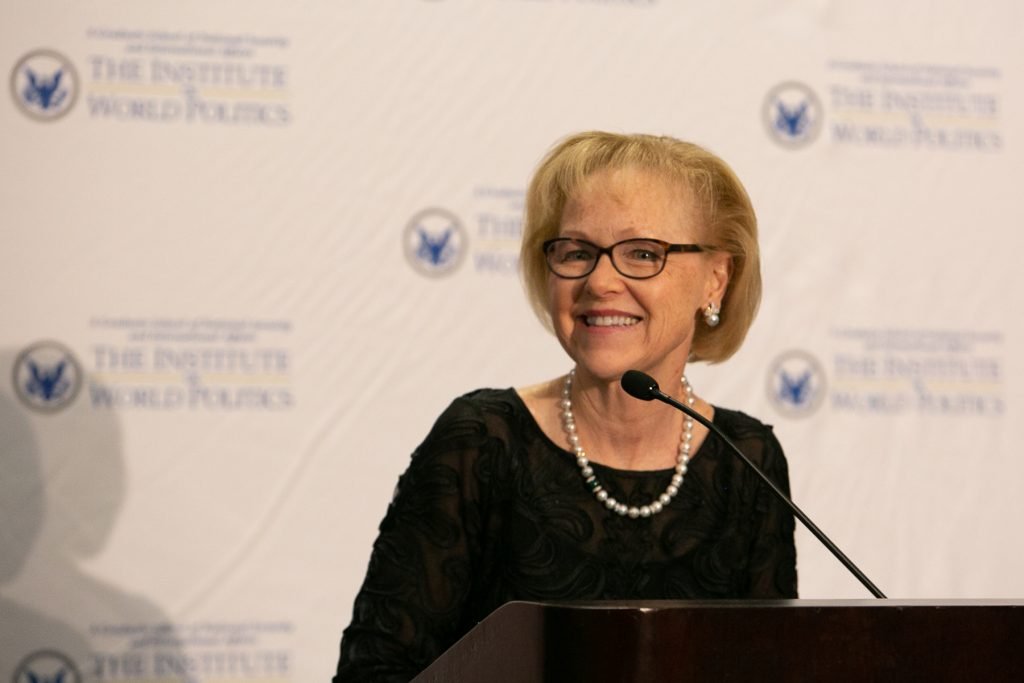 Longtime IWP Trustee Ambassador Aldona Woś, M.D. was elected Vice Chairman of The Institute of World Politics at the February Board of Trustees meeting. Ambassador Woś is a physician, public policy leader, and philanthropist with broad expertise in public health and global affairs. She was the Ambassador to the Republic of Estonia under President George W. Bush and has served as Vice-Chair of the President’s Commission on White House Fellowships.

“Ambassador Woś represents the highest professional values of the Institute,” said IWP Founder and President Dr. John Lenczowski. “She is a defender of morally-ordered liberty with a deep appreciation for the multiple dimensions of national security. In her role as Ambassador to Estonia, she has demonstrated the primary importance of public diplomacy to win hearts and minds.”

Chairman John Lovewell added: “Aldona is an innovative, proactive, and inspirational leader. We are blessed to have her in this role.”

Previously, Amb. Woś served as the Secretary of the North Carolina Department of Health and Human Services, managing 17,000 employees and a $20 billion budget. Ambassador Woś also serves on the Boards of Directors of the Council of American Ambassadors and the Victims of Communism Memorial Foundation; she was appointed by President George W. Bush to the United States Holocaust Memorial Council in 2002 and 2004. She is also the Vice President of the Louis DeJoy and Aldona Woś Family Foundation.

As Ambassador of Estonia, Amb. Woś devoted special time and attention to public diplomacy, winning the hearts and minds of the next generation of Estonian leaders – an effort that IWP applauds, as public diplomacy is a vital but often neglected tool of statecraft.

Amb. Woś has not only had an impressive political career, but a successful medical career as well.  As a former doctor with a medical degree from Warsaw Medical Academy, she has worked to promote health in Estonia, including HIV/AIDS prevention. In her early career, Ambassador Woś worked as a doctor specializing in internal medicine and pulmonary care.

Ambassador Aldona Woś has been a longtime supporter of The Institute of World Politics and a Trustee since 2007. In April 2010, she organized The Institute of World Politics 20th Anniversary Gala, serving as Gala Chair. In April 2016, she organized an event in Greensboro, North Carolina for over 800 guests in which she moderated a discussion with Dr. John Lenczowski and former Director of Central Intelligence Ambassador R. James Woolsey about national security, leadership, and strategy. In 2017, she and her husband Louis DeJoy established The Louis DeJoy and Aldona Z. Woś Family Foundation Scholarship at IWP, which awards $100,000 in scholarships for IWP students each year. This prestigious scholarship has been awarded to 11 students thus far. Most recently, she has been co-chairing IWP’s Search Committee for a new President.