The Institute of World Politics recently celebrated the inauguration of its second President, Hon. James H. Anderson, Ph.D., and held its 30th (+1!) Anniversary Gala during its annual Chancellor’s Council Meeting. These events were held from October 26-27 at the Mayflower Hotel in Washington, D.C. with nearly 300 guests.

Following meetings of the Board of Trustees and Board of Advisors, the annual Chancellor’s Council Meeting began with an opening reception on the evening of October 26th. About 100 of IWP’s top supporters gathered to reconnect and celebrate. Trustee Heidi Leupp gave welcoming remarks and led a toast.

The Chancellor’s Council Meeting continued the next day with presentations by IWP alumni and faculty members on such topics as “Civilians in Warfare: Lessons for Today from the Irish Revolution and the Resistance in Western Europe,” “Cyber Terrorism: Current Threats and Responses,” “Defectors and Intelligence,” “Female Insurgent Fighters and the IWP Experience,” and “Economic Freedom: The Forgotten Weapon in the War on Terror.”

Following these presentations, the IWP community, including students, alumni, faculty, staff, trustees, advisors, and supporters, gathered to celebrate the inauguration of Dr. James Anderson as the second President of IWP.

John Lovewell introduced Dr. Anderson and formally charged him with leading IWP in its mission of developing leaders with a sound understanding of international realities and the ethical conduct of statecraft, based on knowledge and appreciation of the founding principles of the American political economy and the Western moral tradition.

After Dr. Anderson accepted this charge, Mr. Lovewell presented him with a copy of IWP’s Charter. Dr. John J. Tierney, Jr. presented Dr. Anderson with the mace as a symbol of authority granted by IWP’s trustees to preside over the affairs of the Institute.

Dr. Anderson then gave his inaugural address to the community. The event concluded with a formal academic recession and champagne reception for attendees.

After IWP’s in-person 30th Anniversary celebration was derailed by the pandemic in 2020, nearly 300 IWP supporters, alumni, students, faculty members, and friends gathered to celebrate its 30th (+1!) Anniversary Gala on the evening of October 27th.

GEN Alexander gave a keynote address entitled “We Live in Exponential Times!” in which he discussed the realities of the cyber world. He took several questions from guests after his talk.

During closing remarks for the evening, Chairman John Lovewell announced that an anonymous supporter had just pledged a $100,000 matching gift. Within minutes, a dozen IWP supporters from around the room pledged $10,000 gifts to meet this match.

The event concluded with a dessert and dancing reception with the Alex Donner Band from New York. An enthusiastic celebration ensued until late in the evening.

This event was made possible by our Gala Chairs, Gala Committee, and our generous sponsors, who are listed below. The next Chancellor’s Council Meeting and Dinner will be held in fall 2022.

Many Thanks to our Sponsors: 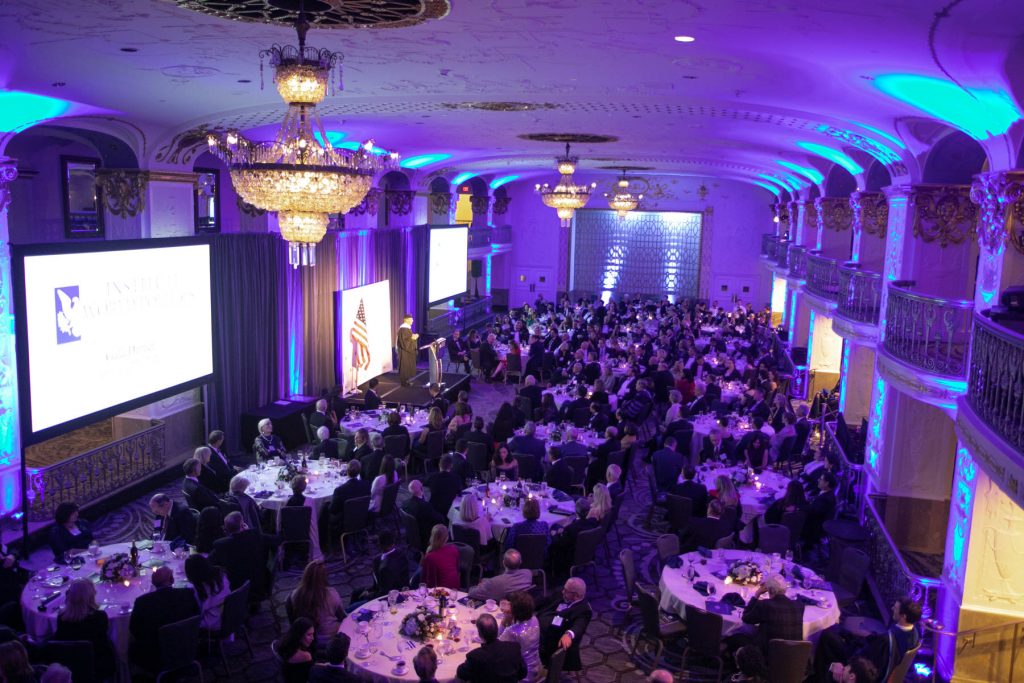