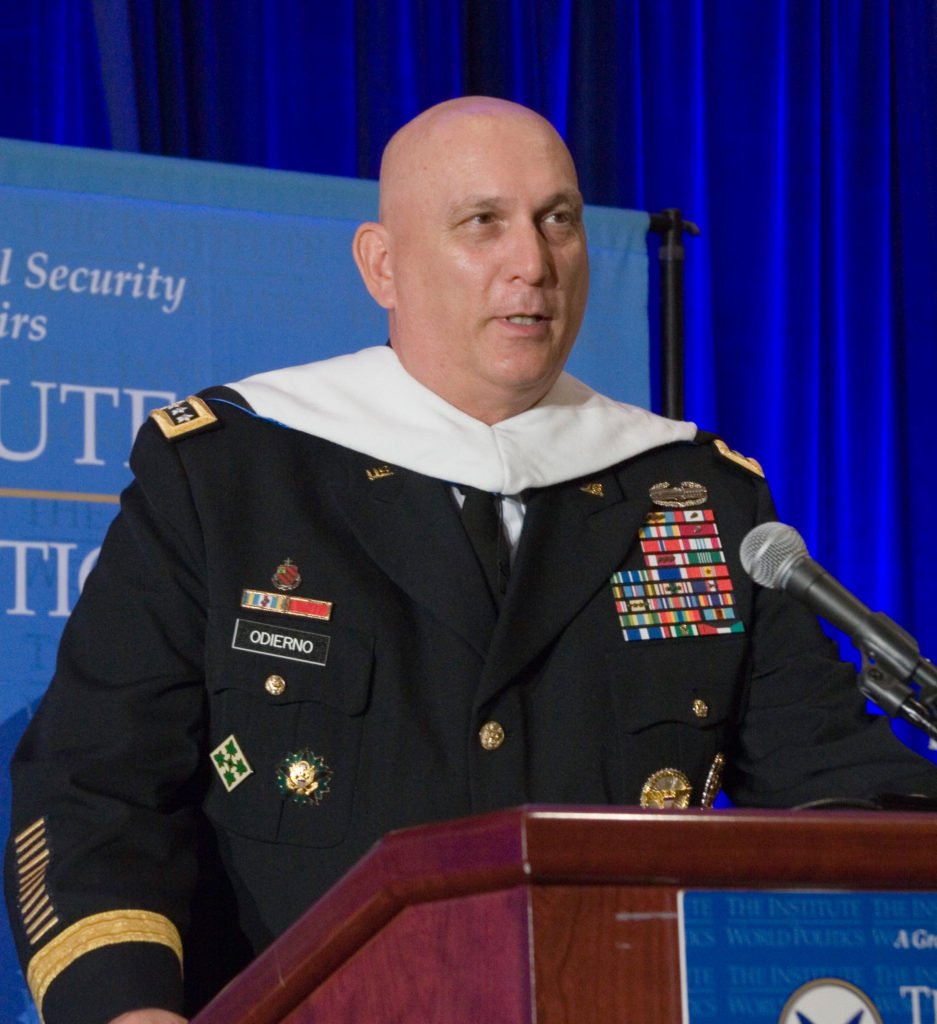 The Institute of World Politics mourns the loss of General Raymond T. Odierno, U.S. Army (Ret.), who passed away on October 9th after a struggle with cancer. General Odierno, an IWP trustee, served as the United States Army’s 38th Chief of Staff from 7 September 2011 to 14 August 2015.

IWP Founder, President Emeritus, and Chancellor Dr. John Lenczowski commented, “GEN Odierno exemplified the very kind of leadership in statecraft that serves as a model for our graduates, our students, our larger community, and the country. He was a man of honor and principle and represented the highest standards to which we hope our students and graduates will aspire.”

Former IWP Army Senior Fellow LTG John C. Thomson, U.S. Army (Ret.), who worked closely with General Odierno during their time in the Army and headed his Initiatives Group in Baghdad, said the following: “Our Nation lost an incredible leader with the passing of General Ray Odierno. He was a humble titan that epitomized the motto of his beloved West Point – Duty, Honor Country.  He loved his Soldiers, and his Soldiers loved him. May our hearts be warmed by memories of his selfless service to our Nation and the strong and enduring legacy he leaves behind.  General O personified ‘Army Strong’ …they come no better than him.”

A native of Rockaway, New Jersey, General Odierno attended the United States Military Academy at West Point, graduating in 1976 with a commission in Field Artillery.

During more than 39 years of service, he commanded units at every echelon, from platoon to theater, with duty in Germany, Albania, Kuwait, Iraq, and the United States. While assigned to U.S. Army Europe, General Odierno served as a battalion executive officer and division artillery executive officer including deployment for Operations DESERT SHIELD and DESERT STORM. He later commanded 2nd Battalion, 8th Field Artillery, 7th Infantry Division, and the Division Artillery, 1st Cavalry Division. General Odierno commanded the 4th Infantry Division, leading the division during Operation IRAQI FREEDOM from April 2003 to March 2004 including the capture of Iraq’s deposed dictator, Saddam Hussein. From December 2006 to February 2008, he served as the Commanding General, Multi-National Corps – Iraq (III Corps), the operational commander of the surge of forces. Later, he served as the Commanding General, Multi-National Force – Iraq and subsequently United States Forces – Iraq, from September 2008 until September 2010. From October 2010 until August 2011, he was the Commander of United States Joint Forces Command. Other significant assignments include: Arms Control Officer, Office of the Secretary of Defense and Assistant to the Chairman of the Joint Chiefs of Staff where he was the military advisor to Secretaries of State Colin Powell and Condoleezza Rice.

General Odierno founded and was the Owner and President of Odierno Associates, LLC. He served as a Senior Advisor to JPMorgan Chase & Company to provide strategic advice and global insights to Chairman and CEO Jamie Dimon, the Board of Directors and members of the Operating Committee on a broad range of issues including international planning and country risk analysis, operations and the rapidly evolving issues of physical and cyber security. The general also served as a Senior Advisor to Teneo Holdings, LLC; Senior Advisor to Virtu Financial, Inc.; and as a board member for Eastern Airlines.

General Odierno held a Bachelor of Science degree in Engineering from West Point and a master’s degree in Nuclear Effects Engineering from North Carolina State University. He was a graduate of the Army War College and held a master’s degree in National Security and Strategic Studies from the Naval War College. He also held three honorary degrees, a Doctorate in Military Science from Norwich University, a Doctorate in Humane Letters from North Carolina State University, and a Doctorate of Laws Honoris Causa from The Institute of World Politics.

General Odierno was involved with IWP for many years. He spoke at an IWP event on “Strategic Transition in Iraq” in 2009, gave the keynote address at IWP’s 2013 Commencement Ceremony, joined the Board of Trustees in 2016, established a Great Statesman Scholarship at IWP in honor of General Robert William Cone, U.S. Army, and, most recently, had been serving on the Gala Committee for IWP’s 30th (+1!) Anniversary Gala and Chancellor’s Dinner, which is taking place on October 27th.

We are deeply saddened by his passing.