The Institute of World Politics is very pleased to welcome Christine Balling (’16) as our new Senior Vice President of Professional Affiliations and Marko Radielovic as our new Senior Advisor, Corporate & Foundation Relations. 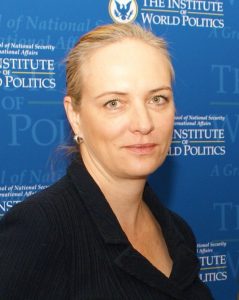 A 2016 graduate of IWP, Christine Balling is the founder of Colombian nonprofit organization Fundación ECCO to promote democracy and youth leadership in areas of conflict. She has also served as a subject matter expert to the U.S. Special Operations South commander on demobilization and counter-recruitment issues, partnered with U.S. Army Civil Affairs teams, worked with the Colombian military’s demobilization group, and in collaboration with the Colombian Army, Air Force, and National Police, she led counter-recruitment projects in areas where the FARC insurgency operated. The Colombian Army incorporated her counter-recruitment model into the non-kinetic component of its mission.

Ms. Balling has performed extensive fieldwork in conflict areas and interviewed female demobilized members of the FARC, ELN fighters, and female Yazidi peshmerga fighters in Iraq. From 2015 to 2020, she was the Senior Fellow for Latin American Affairs at the American Foreign Policy Council. Her articles have been published in Foreign Affairs, The National Interest, the Small Wars Journal, and at TheHill.com. Working with the USMC Small Wars Center in Quantico, VA, she co-authored a section of NATO military doctrine regarding female insurgents. She has lectured at the Escuela Superior de Guerra (ESDEGUE) in Bogotá, the National Defense University’s William J. Perry Center, Harvard Summer School, The #NatSecGirlsSquad conference, and The Institute of World Politics. In 2019, she testified as an expert witness at a Senate Foreign Relations subcommittee hearing on U.S./Colombia relations.

Ms. Balling serves as a member of the Board of Trustees of the Universidad El Bosque in Bogotá, Colombia. She received the Colombian Armed Forces’ Medal of Distinguished Service from the Colombian Minister of Defense in recognition of her work in Colombia and received the 2020 Phillips Academy Andover Alumni Award of Distinction. She holds a B.A. from Columbia University’s Barnard College and an M.A. in National Security Affairs from The Institute of World Politics.

At IWP, she will supervise IWP’s Office of Graduate Recruitment and Office of Career Services. 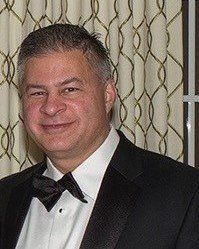 A Marine Corps veteran, Marko Radielovic brings over a decade of experience producing fundraising proposals, managing stewardship efforts, and working with fundraising offices and donors across the United States. He worked with the NRA’s Office of Advancement as a Senior Writer for many years and now serves as a Senior Associate with Alexandria Group International.

Mr. Radielovic is also a subject matter expert on handgun hunting and has written numerous articles and three books on this topic. He is the host writer and co-producer of the Amazon Prime hunting show Big Iron. Previously, he served as Production Manager with VJR, Inc. and was a writer and editor for Mopar Muscle and Car Craft magazines.

Mr. Radielovic also has extensive program management experience. He was a Business Development Manager for Global Strategies Group in Washington, D.C.; a Program Manager for Greystone Limited in Croatia; and a Project Contractor with Kenyon International Emergency Services, where he supervised the construction of three forensics/DNA facilities for the identification of war remains. He coordinated relief and refugee programs in Venezuela, Kosovo, Albania, Montenegro, and Bosnia-Herzegovina. He also served as a Legislative Assistant on Capitol Hill.

At IWP, he will be supporting the Institutional Advancement team.