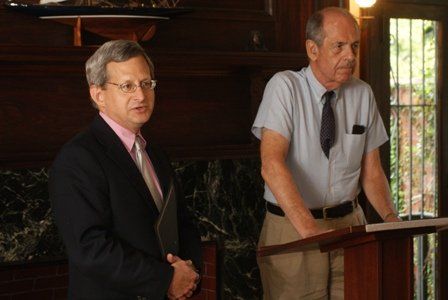 On Tuesday, July 20, 2010, 39-year CIA veteran Burton Gerber delivered a lecture on “The Ethics of Intelligence: During the Cold War and the Age of Terrorism” to an audience of IWP students, interns, and friends.

Mr. Gerber proceeded to engage his audience in an interactive discussion on the ethics of intelligence and of other national security measures. He described the concept of a “Right vs. Right” decision, in which each choice is desirable and ethically right.

Particularly in the United States, he said, we must walk a fine line between the “right” that gleaning intelligence in an effort to ensure the safety of our citizens (this protection is the first and primary role of government) and the “right” that is the protection of our privacy and civil rights.

He also discussed the specific issue of drone attacks that are aimed at a target but may accidentally result in civilian casualties and the polarizing issue of torture. Many questions arise concerning these issues, including whether it is prudent to carry them out in specific situations, whether the action will create more ill will against your nation in the long term, and whether such ethical principles such as the Catholic “principle of double effect” would apply in that situation.

Mr. Gerber also explained that there are many interrogation methods that do not involve torture but very effective; however, when he served in the CIA, they were not taught in a systematic way. For instance, some elements of an effective interrogation technique include conducting the interrogation in the language of the detainee and remaining in control of the situation.

The lecture finished with a wide-ranging question-and-answer session, which covered such diverse topics as inducing spies to betray their country, the techniques involved in this process, and the question of whether or not is ethical to do so.