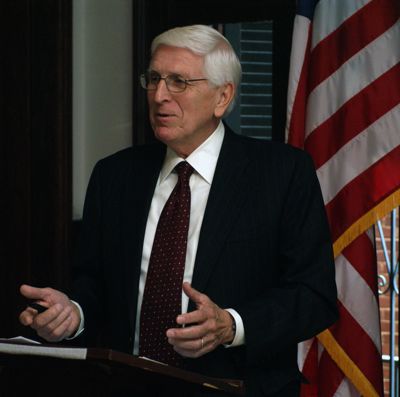 On July 22nd, Ambassador Vince Obsitnik, former U.S. Ambassador to the Slovak Republic, spoke at IWP.  The topic of his discussion was “Slovakia: Past and Future.”

Amb. Obsitnik delivered a detailed and comprehensive survey of issues facing Slovakia, including its domestic and international affairs. He also discussed U.S.-Slovakian relations and offered examples of his experiences while serving as U.S. Ambassador, stressing the importance of personal relationships and cultural projects.

He concluded his presentation with a discussion of current Slovakian politics and government priorities.

During the ensuing reception, Amb. Thomas Melady, the Institute’s Senior Diplomat in Residence, presented Amb. Obsitnik with an award for his service in the diplomatic sphere.

The lecture’s attendees included two Slovakian interns from The Fund for American Studies, and longtime IWP friend Martha Lewis, whose husband used to work at IBM with Amb. Obsitnik.