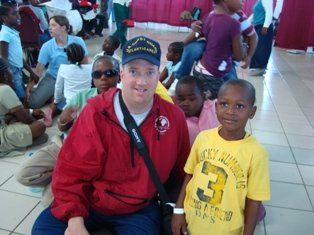 “What I learned here at IWP is going to be with me for the rest of my life. I am truly grateful to the friends and supporters of IWP who have made this possible for me – I am forever in their debt.”

The man who spoke these words about IWP, Jim Dolbow, is a longtime friend of the Institute and a true lifelong learner.  He has been spending his time gaining wisdom from IWP professors while maintaining a productive and multifaceted professional life, where he puts this wisdom into practice.

Jim took his first classes at IWP just prior to his senior year of college, in the summer of 1992, on the advice of his advisor at Marymount University, Dr. Charles Smith – who now is a member of the IWP faculty.  Jim took “Russia in Transition” with IWP President John Lenczowski, and “Problems of Intelligence Policy” with Professor Ken deGraffenreid.  He enjoyed his classes at the Institute so much that he returned to intern the following spring, and has been taking classes on and off since then.

Jim completed his first Masters degree at the U.S. Naval War College.  This institution, which shares a similar academic rigor and philosophy, has recently approved 49 of the 53 courses at IWP as transferrable to one of its own degrees.  There, Jim concentrated on studying the military instrument of power.

Because of his interests across the realm of national security affairs, Jim wanted to develop his knowledge of the other instruments of power.  For this, he returned to IWP to complete his second Masters degree.

Having also studied at the National Defense University and the U.S. Air Force’s Air Command and Staff College, Jim finds his classes at IWP to be among “the most rewarding and challenging” courses that he has taken at any academic institution.  He remarks, “I am never disappointed walking through IWP’s doors.  Every time I do so, I learn something… Even in my comprehensive examination today, I learned something new from each of the three panelists” (that is, Dr. Lenczowski, Amb. Thomas Melady, and Dr. Marek Chodakiewicz).

Jim has spent eleven years on Capitol Hill, seven of them serving as a military legislative assistant for former Rep. John Hostettler (IN-08), who was a member of the House Armed Services Committee.  Jim was able to apply what he learned at IWP in briefings and meetings with Department of Defense officials.  Jim says that, during this time, “I was able to put to use the wisdom and the contacts I gained at IWP, as well as the advice of the faculty.”

In 2007, Jim spent eight months at the Pentagon, later that year becoming a contractor for the Department of Homeland Security.  Since July 2002, he has been an officer in the United States Coast Guard Reserve.  In these positions, Jim has found the knowledge he gained at IWP to be invaluable.

The Institute exposed Jim to the concept of soft power, and inspired him to blog about how the U.S. can use this form of influence to win the hearts and minds of people in other nations.  Jim writes for the U.S. Naval Institute Blog and for An Unofficial Coast Guard Blog, and just returned from a weeklong trip to Antigua on the U.S. Navy Hospital Ship Comfort, from which he blogged about medical diplomacy – one of the many cousins of public diplomacy.  Examples of his posts may be found here and here.

Jim is also on the editorial board of the U.S. Naval Institute’s well-known magazine, Proceedings. In this capacity, he both reviews articles prior to publication, and writes articles using the foundational knowledge he gained at IWP.  In one such article, he called for a fleet of fifteen US hospital ships – while the Navy only has two.  (Click here to read this article.)

Although he will be graduating in June with an M.A. in Statecraft and World Politics, Jim might not be finished taking classes at IWP.  He is considering returning for a third Masters in Strategic Intelligence.  If IWP offers a Ph.D. program in the future, Jim says that he would like to be the first to enroll.

Jim explains that “the scholar-practitioners here inspire me.”  Indeed, one of Jim’s ultimate goals is to be on the faculty of IWP, after developing more experience through hands-on work in his field.

Between juggling his roles as coast guard reserve officer, contractor, blogger, and editorial board member, it seems Jim is well on his way.