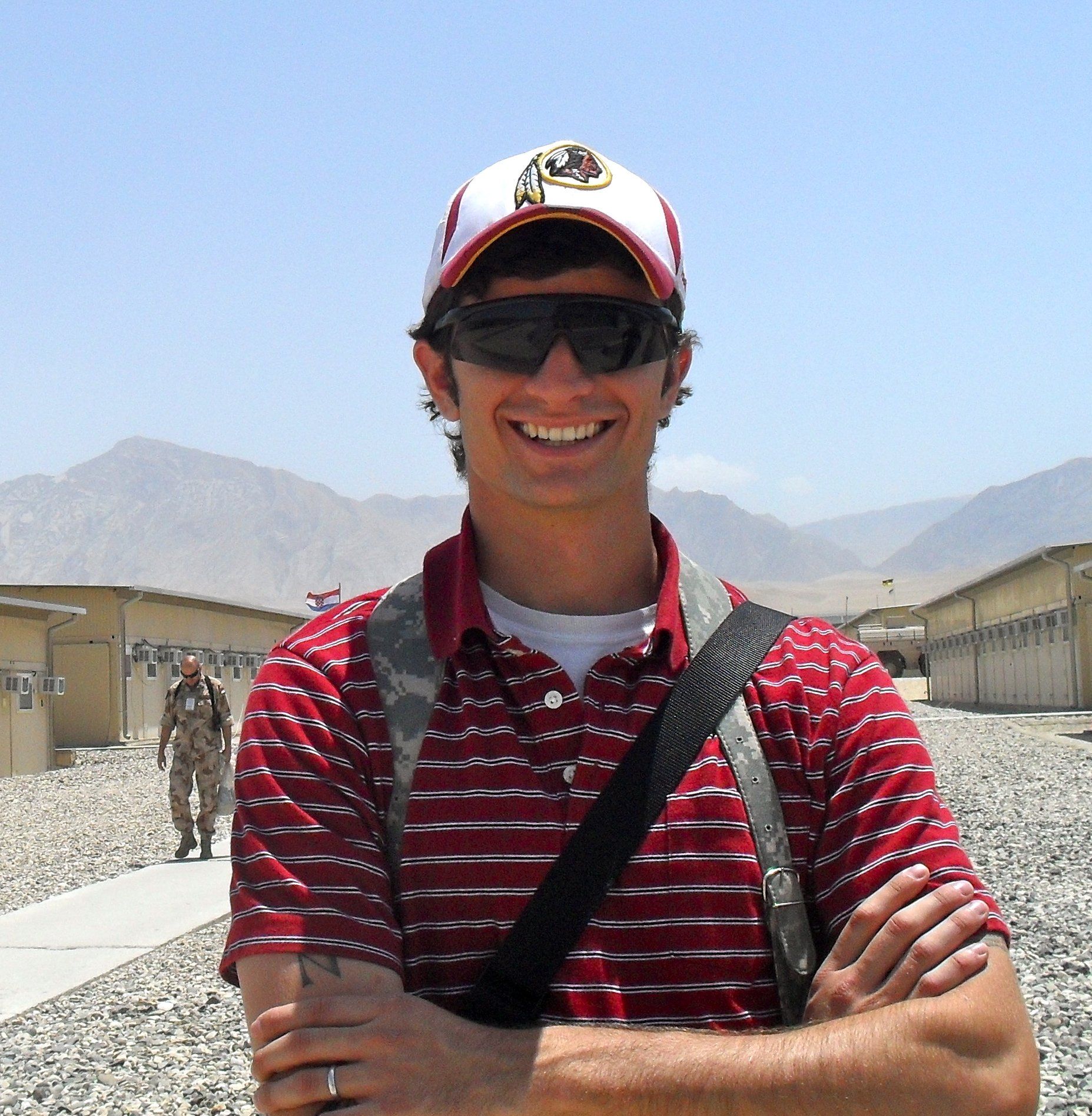 We wrote to IWP student Matt Flynn during his time in Afghanistan, and he sent us the responses below for his student profile.  He is pictured to the right in Northern Afghanistan in Mazar-e Sharif, Balkh Province.

What brought you to IWP?

I became interested in intelligence and national security while attending Fayetteville State University as an undergraduate student of political science. Towards the end of my senior year, I realized I wanted to pursue a career in the Intelligence Community (IC) and began looking for schools offering a Master’s degree in Strategic Intelligence Studies. IWP was one of the very few schools that came up as an answer to my Google search for this type of degree.

After reviewing IWP’s website and other materials, I became very interested in what IWP had to offer. Before applying for the school’s graduate program, I sought out an internship as a research assistant at the school. This was a great way for me to get to know the school, the professors, and the city of Washington. The internship opened many doors for me, including leading me to my career of choice with the Defense Intelligence Agency (DIA).

What degree are you pursuing at IWP?

I officially started classes at IWP in the fall of 2008 as a graduate student of Strategic Intelligence Studies. One of my first classes, Intelligence and Policy, was with Professor DeGraffenreid, for whom I worked as an intern the previous summer. It was a perfect introduction to the world of intelligence, particularly for students who, like me, plan to pursue a career in the IC.

Do you have any observations about your studies at IWP?

One aspect of the school’s curriculum I particularly enjoy is that you can have your own focus, and apply it to your research. This helps exponentially in the long run, because it prepares the student for a career in national security, intelligence, or policy. For example, most of my research papers have been focused on counterinsurgency, counter-terrorism, and Middle East and South Asia studies, and I was able to use these research papers in my search for jobs.

IWP has been very accommodating of my schedule as well. Not only do I work full-time for DIA, requiring me to only take two classes a semester, but I have deployed to Afghanistan for six months. I have been able to place my degree on hold until I can return and finish my studies. I have three semesters left at IWP, and look forward to finishing my studies there.

How did you enter the Intelligence Community?

As I began taking classes at IWP, I was able to network and develop contacts, which eventually led to me applying for positions that would further my career. I applied everywhere I could think of that offered jobs related to intelligence: think tanks, government agencies, private companies. I interviewed with several companies, but none seemed to be the right fit. However, with the assistance and advice from the school’s career consultant, Derrick Dortch, and my own persistence, in January 2009 I received a call from the Defense Intelligence Agency (DIA) offering me a job as an intelligence analyst.

Could you describe your current work?

As an intelligence analyst with DIA, I work for the Afghanistan/Pakistan Task Force (APTF) at the Pentagon. This office was created in early 2009 to provide intelligence support to all Department of Defense (DoD) and military personnel deployed to Afghanistan, as well as the Joint Chiefs of Staff, Secretary of Defense, and other top defense decision-makers in the U.S. The APTF, as part of DIA, also deploys analysts to provide direct intelligence support to the warfighters and decision-makers in Afghanistan. Consequently, I took the opportunity to volunteer for deployment to Afghanistan in February 2010.

At the beginning of 2010, a paper was published via the Center for a New American Security called “Fixing Intel: A Blueprint for Making Intelligence Relevant in Afghanistan.” This paper describes how intelligence in Afghanistan has been overly focused on reacting to the enemy (the Taliban), and it prescribes creating teams of analysts who will gather information about non-enemy related information from units at the tactical level. These teams of analysts are part of what is called “SOIC” (Stability Operations Information Centers). I am a member of one of the first of these SOIC teams. This unconventional intelligence position resembles journalism, gathering and aggregating information about the population of Afghanistan and its National Security Forces into holistic narratives, or District Narrative Assessment (DNAs), in the key priority districts around the country.

My tour in Afghanistan has granted me a wealth of experience in working with the U.S. military, senior U.S. civilians, coalition forces, and Afghans. I have briefed and interviewed strategic level decision makers (Regional Commanders – 2-star generals), as well as tactical ground-level military units (sergeants and privates). I have traveled to many regions of the country and have worked with different coalition partners in their respective areas of responsibility, including the Polish in Ghazni Province, the Italians in Herat, the Spanish in Badghis, and the Canadians in Kandahar. Aside from language barriers, each nation necessitates different methods of procedure and interview. The assessments we produce have been very useful for commanders and their units in Afghanistan, as well as for the U.S. intelligence community and other friendly intelligence services. The SOIC has strengthened our coalition’s ability to provide intelligence support to the international counter-insurgency operations in Afghanistan.

What are some of your goals?

When I return to the U.S., I will be reintegrated back into my home office, the APTF, and continue providing intelligence support for Afghanistan. My immediate goal is to complete my Master’s degree at IWP, which will be the key to achieving all my mid- to long-term goals. As soon as I graduate with an M.A. from IWP, I plan to apply for jobs within DIA at Central Command (USCENTCOM) in Tampa, Florida or in Europe with European Command (USEUCOM) or Africa Command (AFRICOM). There are also opportunities for me to deploy again in the future. Along the way, I am going to work on obtaining a Ph.D.

I’m not sure where I want to end up in the long run, but I know that with a Master’s from IWP, and a career with DIA (which IWP helped me get), I can look forward to a fulfilling career in the realm of national security and intelligence. 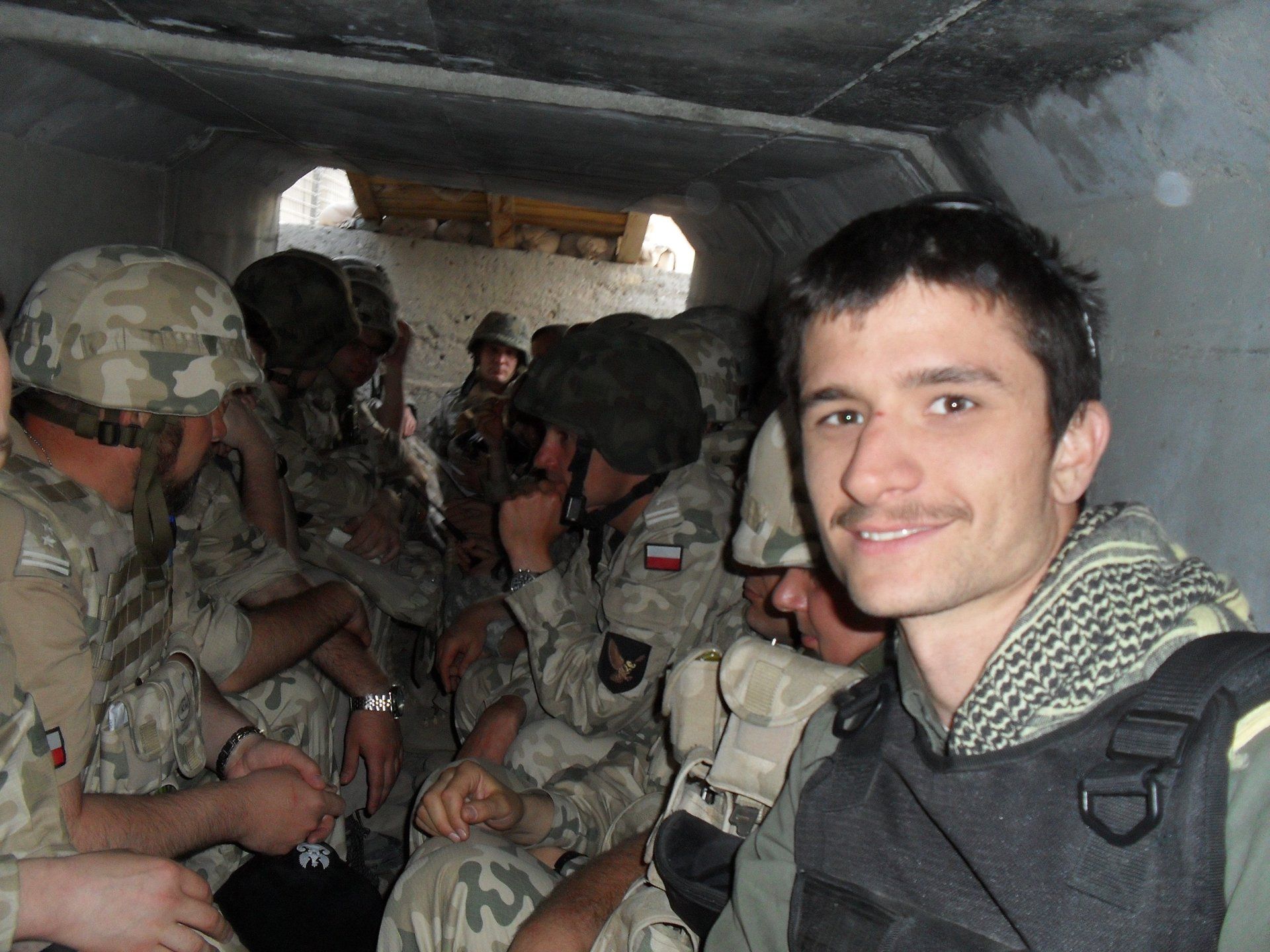 Pictured above: Matt and Polish soldiers in a bunker in Ghazni  Province during rocket attacks