If you met the young and unassuming IWP student Mike Webber, you might not guess that he has already overseen 50 employees and a million dollar budget, traveled the world, and interned at the State Department, Department of Defense, and the UN. You would easily discover, however, that Mike loves to learn, particularly about history, international affairs, the military, and diplomacy.

Before rushing off to the National Archives with IWP Director of Professional Affiliations Linda Strating to “learn how the system there works,” Mike described some of his experiences in a quick interview.

Mike attended Michigan State University, where he was pursuing his bachelor’s degree in history and was completing courses in political science and economics. One formative experience for him occurred during his freshman year. He chose to participate in one of his school’s study abroad programs, in which he completed intensive coursework about World War II, and then traveled to Europe with his class. They followed the Allied route from England to Normandy, Belgium, Luxembourg, the Netherlands, and Germany. Mike found himself moved by the fact that many of the towns his class visited still flew American flags in appreciation for our nation’s efforts in this war.

Mike comments, “I don’t like to go to the beach or to tourist attractions when I travel. I like to learn about the way people live in different countries and get an actual experience.” Accordingly, he also pursued opportunities to travel to Thailand, Hong Kong, Chile, Bolivia, and Panama. In a spring break trip to Panama, he shadowed a member of the Peace Corps for a week, and learned in a hands-on way what the Peace Corps does. During his visit, the Corps was building pathways and stairs for a new national park in the middle of the jungle.

In addition to his travel, Mike was pursuing professional opportunities. One summer, he did an internship through the State Department, which “lent” him to the DoD, which in turn had him work at the US mission to the United Nations. Mike worked for the Military Staff Committee there, which dovetailed well with his interest in the intersection of military and diplomatic affairs. This Committee keeps track of US peacekeeping forces, and advises the US ambassador to the UN about US military capabilities and other relevant issues. They also help prepare the US ambassador to respond to UN requests for equipment for various missions abroad.

Often, Mike would be assigned to attend private meetings of military representatives at the UN, who would candidly discuss what position the council would take as a whole before they presented their ideas officially. Mike was fascinated to learn how diplomacy and the military interact, how they can work together, and what the tension points between the two fields can be.

Part of this budget went towards student groups and activities, including racial, ethnic, and minority groups that worked to raise awareness of different issues or cultures, as well as clubs formed around sports or other interests. His council funded and ran such programs and services as keeping a lawyer on retainer for students in minor legal trouble and encouraging and enabling students to vote via an “I Vote” campaign, which registered students to vote and provided information on candidates and issues.

During this time, Mike began to think about his next steps after college, and soon found himself at the internship program at The Institute of World Politics in fall 2009. Please click here to read about his internship experience. While he was in DC, he seriously studied several area schools that he was considering for graduate programs. He attended several classes and met professors and students at many of these schools in an effort to explore their culture, curriculum, and rigor. He ultimately decided IWP was the best fit for him. He is now enrolled in the Master’s degree program in Statecraft and National Security, and he plans to specialize in Intelligence.

He has found that his classes at the Institute have exceeded his expectations. He especially enjoyed an introductory course in counterintelligence, which, among other things, explored the relationship and tensions between counterintelligence and democracy. He also particularly enjoyed his course on US Intelligence in the Cold War and Beyond, because of its largely historical focus.

Mike is excited about the many different career courses that his IWP education is opening up for him. Though he hasn’t yet made a final decision, he is considering positions with the Air Force, Navy, and various government agencies. He is confident about his capabilities because his degree from IWP will prepare him for any future jobs, and he looks forward to working in a field where he can combine his love of history, strategy, and the military with diplomacy and statecraft.

Mike, a recipient of IWP’s Institute Scholarship, would like to thank IWP’s supporters, and particularly the members of the 1947 Club, for helping make possible his studies at IWP. 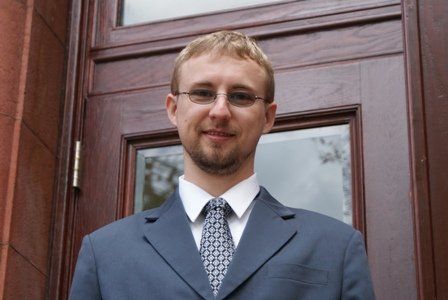