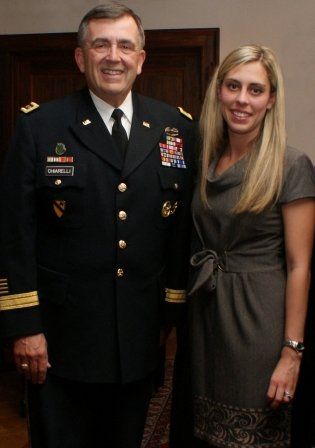 IWP has many exceptional students – but not many who are simultaneously moms, marathon runners, Army Captains, and full time graduate students.

Captain Katie Crombe is all of these things.  Between caring for her daughter Dylan (age 3) with her husband Ben Crombe, running (most recently in the Army Ten Miler, the Marine Corps Marathon, and the Lake Anna Triathlon), she is currently in a two year Army fellowship program at The Institute of World Politics, pursuing an M.A. in Statecraft and National Security.

What’s really neat about Katie is that she’s a proven warfighter.  Don’t let this lady’s looks deceive you – she has no problem going toe to toe with the toughest infantry guy…and winning!  She is very sharp, very smart, an exceptional writer, and she can make the transition from a tactical to strategic viewpoint.  She is willing to open her mind, look at things from different angles, and do the research necessary for her tasks.

Although Katie was born at Walter Reed Army Medical Hospital and is considered an outstanding officer, she didn’t know that she was going to go into the Army:

I never thought I would join the Army, much less make a career out of it. Growing up I told everyone I wanted to be either the President or Katie Couric.  My father, grandfathers, and great grandfathers all served as Army officers so I really grew up around the Army and was familiar with the traditions and lifestyle.  I didn’t decide to join the Army until my senior year of high school and the challenges that come with picking a university.  The college I chose happened to be the most expensive of the bunch.  Lehigh University didn’t offer swimming scholarships and I did not want to take out loans, leaving me with one option: applying for an ROTC scholarship.

Katie graduated with a B.A. in English and Political Science, where she was President of Class of 2003, and has since won an Outstanding Alumni Award.

She then became an Army Strategist, but has served in a variety of positions, deploying twice to Iraq with the 3rd Armored Cavalry Regiment.  During this time, she traveled to Tal Afar, Baghdad, and Al Asad, and held leadership positions in logistics units.

She also worked within Human Resources Command, where she managed the careers of 1,100 transportation officers.  Finally, she became a strategist and writer, in which position she planned and executed new ideas for personnel management within the Army.

She has received numerous awards and recognitions, including the Bronze Star Medal, two Meritorious Service Medals, the Army Commendation Medal, the Army Achievement Medal, a Valorous Unit Citation, a Superior Unit Award, and multiple other campaign medals associated with Global War on Terror.

One of her most moving experiences, though, was her work at Walter Reed Army Medical Center, where she was the commander of 300 wounded warriors.  She managed their transitions back to the fighting force or to civilian life while they recovered from their wounds at Walter Reed.  Here Katie describes her experiences:

A few minutes with a soldier or family that has paid in life or limb is enough to change anyone.  Doing it daily for 18 months profoundly changed my outlook on life.  You often hear about and see the physical results of ten years at war.  Soldiers with lost limbs, eyes, and ears receive the majority of the press.  Though this attention is warranted, it is often the internal injuries that cause the most harm to the soldiers and families.  There are soldiers with traumatic brain injuries and post traumatic stress disorder, soldiers with severe abdominal and pelvic blast injuries that leave them unable to do many things that we all take for granted every day.  Often, it is these injuries that are most damaging to families because they are difficult for the soldiers to explain, cope with, and recover from.  It is the sense of resilience and perseverance among the wounded that had the greatest impact on me.

Many Americans feel sorry for the wounded; the soldiers despise this response.  They signed up to serve their country and understood they might pay in this way.  They would rather the public understand the reasons for their sacrifices (and accomplishments) than have people look at them in a guilty or perplexed manner.   An informed public is worth more than appreciative statements and donations, because an informed public and legislature would lead us down a path of prudent decision making, ensuring that these sacrifices are for a purpose.

Katie recognizes the importance of continuing education in her field, and has even co-authored an article to this effect.  http://findarticles.com/p/articles/mi_qa3723/is_200908/ai_n35627782/pg_6/

After beginning the application process to various universities, Katie received a call from her old boss describing IWP’s programs.  “After researching the Institute and speaking with current students, I decided it was exactly the kind of place I would like to spend a two year hiatus from the military.  I applied, was accepted and began in Summer 2010.”

Katie is now one of seven Army officers currently pursuing Master’s Degrees at IWP, and she does not regret her choice of a graduate school:

I cannot imagine a better environment to pursue a Master’s Degree in the field of international relations.  The professors are not only scholars but also practitioners.  Their real world experience helps students put the academic theories into perspective.  I enjoy the tight-knit community and the sense of camaraderie throughout the school.

On March 31, 2011, Katie was selected for a Below the Zone (early) promotion to Major. She should pin on her rank sometime within the next year.

In the future, Katie will most likely have a position as a strategist in the Middle East.  She is excited to tackle her next Army assignment armed with her IWP education:

IWP will have an immense impact on my Army career. The professors are truly a fountain of knowledge.  I can see myself e-mailing them years from now looking for advice.  I cannot believe how much I have learned in only nine months, and how much I did not know about the world before beginning this program.  I wish I had many of these lessons before my deployments.  They would have been helpful.